Comments of the Week #44: From the Universe's center to where you are

"You do not become good by trying to be good, but by finding the goodness that is already within you, and allowing that goodness to emerge." -Eckhart Tolle

We're really hitting our stride for 2015 here at Starts With A Bang, and I'm so pleased you shared this past week with me. If you missed anything, here's what we've been through:

These articles have all been a pleasure to be a part of, and as always, you've had your say as well. Let’s take a look at what we've chosen as your Comments of the Week!

As another has said, the evidence that the Universe is like a balloon's surface is tremendous, so long as you're willing to accept an analogy. You're going to have to, frankly, unless you want to go and work through all the math associated with General Relativity, and be aware that all analogies have limitations. The reason the balloon is so attractive is because it's familiar, it's in a reduced number of dimensions which makes it easy to visualize, and it gives you a reasonable analogy for why galaxies appear to recede from one another at faster speeds the farther away they are: because the fabric of space itself is expanding over time.

But there are limits to this analogy. The fact that I say, "surface of a balloon" doesn't mean that this curves in on itself, that it has a closed topology or that it's embedded in a higher dimensional space. I could just as easily have used balloon material that wasn't in a spherical shape but was flat and being stretched, or in the shape of a saddle and being stretched, or in any shape at all. The key is that space itself is expanding, and so if you need a "raisins inside baking bread analogy" because you can't extrapolate from two to three dimensions, use that instead.

The part observable to us is centered on (well, near) us, but that's certainly not the entirety of the Universe. The key to understanding the expansion of space is to understand that any observer would see galaxies distributed and receding the same way we do, and the particulars of what we see alone are specific to our location; the generalities hold everywhere. 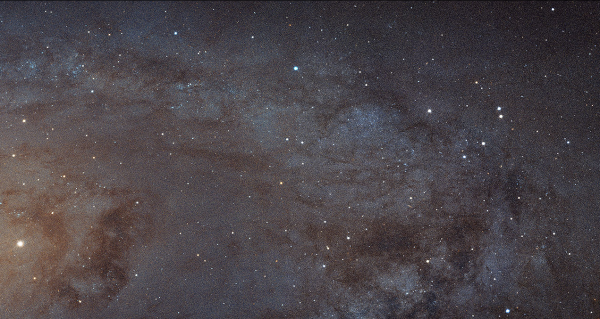 From Robin Kirby on diving into Andromeda: "At various spots on the image at around the 10 % and 25 to 30 % magnification on the toolbar at the bottom of the screen, stars appear to be arranged somehow in a uniform grid of squares. It is still detectable on further magnification but is not as easily discerned."

You have to recognize how much information is stored here, and hence, what trickery needs to be utilized to display this without, you know, destroying your browser. So when you dive into the image, you're going to find that it loads in stages: first the zoomed-out image, and then when you dive in, greater and greater details of the particular region you're interested in. 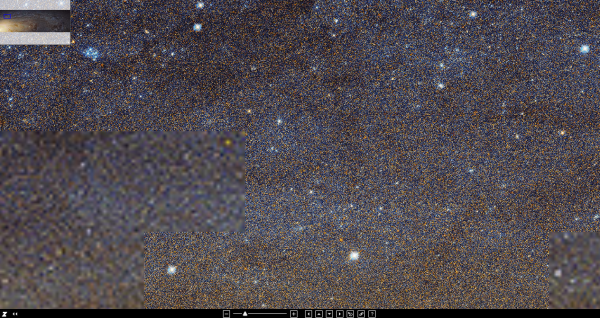 You'll see artifacts, as it loads in "squares" that progressively fill in at the desired zoom level. These regions are broken up so that it only needs to load a fraction of the full-resolution image at any given time. When you zoom in to certain levels, these artifacts are more visible than at others, due to, well, the imperfections of the "seams." 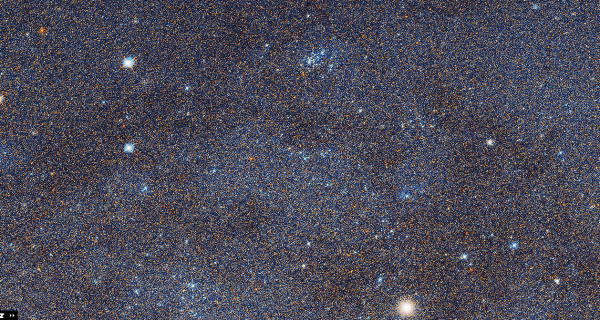 If you can't see the "boxy" features, above, try clicking on the image and loading the full-resolution version; I can see what you're referring to. But it's not due to a "granularity" of the data (or galaxy) itself, but rather it is an artifact of how it displays to you. Which is good, because, well, no offense to any of our computers but they're really not equipped to handle images that are tens of gigapixels in size! 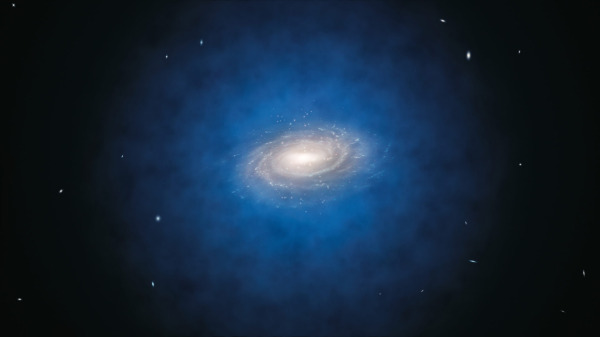 From Omega Centauri on galaxy formation: "Have thoughts about dark matter and galaxy formation changed? Last I heard without DM density variations wouldn’t have grown to the point where stars/galaxies would formed."

The problem isn't that no stars or galaxies would have formed; the problem is that they would have only formed from a "top-down" approach, which is to say that small-scale structure is tremendously suppressed in a Universe without dark matter, as the density fluctuations are blown apart by radiation in the early Universe. The larger-scale fluctuations, however, can still collapse on longer timescales, eventually fragmenting into galaxies and star clusters.

They'd still be there, but the Universe would have formed structure much later, on larger scales first, and would look very different than it does today.

We need dark matter to produce what we see, but not to produce any sort of structure at all.

From Jan Vones on nothing: "Boo! Hiss! The vacuum is not nothing. No thing is nothing. If nothing were the vacuum, then it would be something. To be is to be something. This is basic Aristotle, not to mention common sense."

Welcome to the world of theoretical physics, for real this time. What I mean by this is that now we're caught in a very difficult position where we have a mathematical description of reality -- of all the physical phenomena that occur in the Universe -- and we're trying to reconcile that with our intuition. With what we perceive as physical or abstract concepts. And our physical intuition totally fails us when it comes to "nothing."

Sure, you can imagine going outside of space or time... but can you really? You can tell yourself that "virtual particles aren't real," except the mathematics of them describes reality perfectly accurately. You can says that "if you still have space and time with a non-zero vacuum energy, that sounds like something rather than nothing," but can you actually get more "nothing-y" than that?

This is why I refer to the results of the equations as "physical reality," much to the chagrin of everyone who's looking for a deeper truth. That is, in fact, the deeper truth; our interpretations of it are the approximations. Now go and common sense that.

From Robert H. Olley on the fourth (spatial) dimension: "H.G.Wells also wrote “the Plattner Story”, about a man who had been kicked into the 4th dimension and returned with his heart beating on the right-hand side."

Surprisingly, 1-in-10,000 people are actually born with not only their heart beating on the right-hand side, but with all of their internal organs flipped. It's called situs invertus, and is often accompanied by congenital heart problems.

But a higher-dimensional being would appear as God-like to us as we would to a cartoon Universe. By virtue of having a third dimension, pencils/erasers/paints/etc., we could pick beings out of their Universe, rearrange their insides, teleport them anywhere instantly, perform surgery without incisions like brain transplants, and toy with their puny concepts of space. So it would be for a higher-dimensional being and our own world.

For those of you who like speculating about the divine, a five-dimensional being would be indistinguishable from God for us.

From Robert on the mass/light problem of galaxies: "I doubt we’re able to observe every single star in a far off galaxy individually, so we must use some kind of assumptions about the mass distribution of stars in a galaxy. It sounds to me like this could potentially introduce huge error in the mass measurement, so how do we know for certain there’s a mass discrepancy at all?"

What we can observe, however, is more than enough to tell us what stars are present in a galaxy. We don't even need spectroscopy to do it: photometry is enough. By measuring the relative amounts of red, yellow/green and blue light coming from galaxies, we can infer the populations of stars inside, and what the stellar mass fraction is. You might be able to make arguments that we don't understand it at about the 10% level, but you would literally need a factor of fifty to fix it. If we did the most naive thing possible, and assumed all the stars were like our Sun, the mass-to-light ratio for the Milky Way would only be off by a factor of three from what it actually is.

So, we might not know exactly what the mass discrepancy is, but the errors are many orders of magnitude smaller than the effect we find. 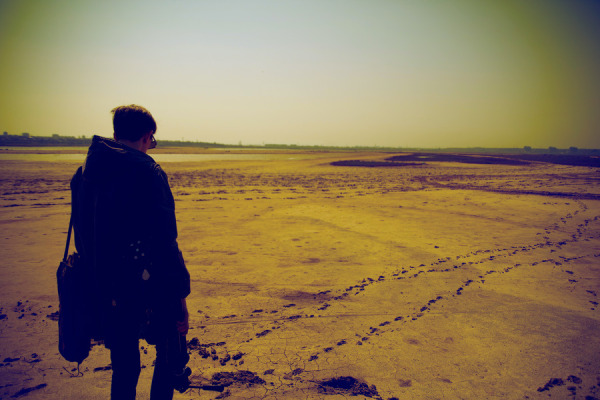 And finally, from eric on the Jeff Corwin method of finding longitude: "Assuming you are not dropped in the ocean or deep arctic/antarctic, there’s always the Jeff Corwin method. He’s a herpetologist that’s done a number of nature specials. One of them was: they drop him anywhere on Earth and he has to identify where he is within about 50 miles, in no more than 24 hours. The challenge was accepted and passed. He used his extensive knowledge of the species and variations of snakes (and other animals) to pinpoint where he was.

So the Jeff Corwin method for finding latitude and longitude:
Step 1: become world-class expert on snakes.
Step 2: find snake.
Step 3: use snake’s species and subspecies varietal indicators to figure out where you are."

Well, it isn't in my wheelhouse, as I thought the "here's how you figure it out" kind of implied, you know, figuring it out from scratch, but I'll let you have this one. As a reward, here's a picture of a snake. 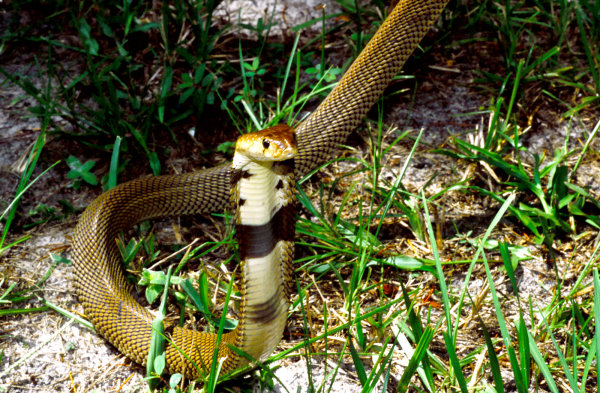 Congratulations! You are in... India?

Thanks for a great week of comments, everyone, and I'll see you back here for more wonders of the Universe next week!

Good stuff Ethan. There are bloggers out there who talk at you. Responding to comments like this is talking to us. That's a good thing. Even if you still can't justify the universe not having a centre, when the raisin cake does!