“Henceforth space by itself, and time by itself, are doomed to fade away into mere shadows, and only a kind of union of the two will preserve an independent reality.” -Hermann Minkowski

When you think of waves, chances are you think of some type of pressure wave moving through a medium, like sound or water waves, or you think of light, which is an electromagnetic wave that requires no medium to move through. But there's another type of wave that exists, that no one expected before Einstein came along: gravitational waves.

It's very counterintuitive how these waves come to exist, and yet, this week -- at the behest of Starts With A Bang reader Adam Rabung -- we do our best to explain just what the heck a gravitational wave is, how we know they exist, and how we plan on finding them. 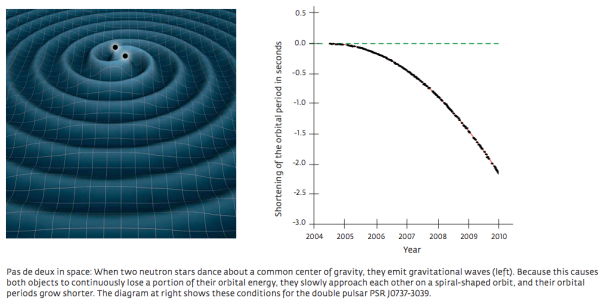 Don't miss this week's Ask Ethan, only on Starts With A Bang at Medium!

"Einstein's gravitational theory, which is said to be the greatest single achievement of theoretical physics, resulted in beautiful relations connecting gravitational phenomena with the geometry of space; this was an exciting idea." -Richard P. Feynman When Einstein's theory was first proposed as…

"There are things known and there are things unknown, and in between are the doors of perception." -Aldous Huxley From tiny, laser-light wavelengths to dark skies to dark matter on the largest scales in the Universe, it's been quite a week at the main Starts With A Bang collection over at Medium.…

Ask Ethan: Is there any such thing as pure energy? (Synopsis)

"It is only through labor and painful effort, by grim energy and resolute courage, that we move on to better things." -Theodore Roosevelt Energy is a fundamental property of nature, and yet it’s also one of the most purely understood phenomena from a conceptual point of view. Some objects have…

Putting Einstein to the Test

"The views of space and time which I wish to lay before you have sprung from the soil of experimental physics, and therein lies their strength. They are radical. Henceforth space by itself, and time by itself, are doomed to fade away into mere shadows, and only a kind of union of the two will…

Anyone ever see this Google Tech Talk:
https://www.youtube.com/watch?v=dEaecUuEqfc

Are We Really A computer simulation with the endgame already prescribed?

I am open to it.
Anyone else?

I am thinking that dark matter is actually the mass onto which "perceived reality" is displayed. ( The Movie Screen)
I Think of dark matter as the actual structure of a movie screen. The structure has mass100% Then The information is beamed via photons onto this mass as the photons absorb the mass of FACT, perceived reality arises and we all as digital bits roam around acting as we are prescribed to do in the micro
We Lift OFF The Screen held back by laws.modern physics. But as pioneers we shall break the SLAVE CHAINS OF REALITY..

So, I think I understand the concept of gravitational waves. However, when it comes to black holes, I have these questions:
1. How can a gravity wave escape the pull of gravity? If not even light nor space-time can escape it then how can a gravity wave escape it?
2. If light is red shifted by a black hole to the point that it looks to us as if the thing emitting the light looks frozen in time, then would a gravity wave (also traveling at the speed of light), also be "red shifted" to the point that we could not detect it by means of LIGO or LISA?