"[T]he coin of life has meaning and value no matter what side it lands on. It's each individual's choice whether to bet on the outcome or not, but ultimately your coin of life will be spent somehow." -Virgil Kalyana Mittata Iordache

Coin flips are traditionally the way to settle disputes with two choices and equal probabilities. They're ubiquitous not only in sporting events, but in events as important as elections, with thirty five states having adopted a coin flip as their official tiebreaker method. Yesterday, in Iowa, the democratic election was so close that there were six county delegate seats that needed to be decided by coin flip. 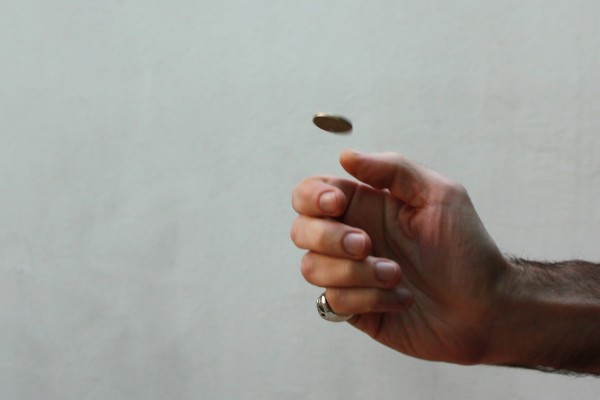 Hillary Clinton won all six, leading some to speculate that there must be some foul play at work. However, a closer look at the odds revealed what you might have suspected all along: that quite often, the probability of one of many unlikely outcomes can be just as high than the probability of one of the most likely outcomes. In other words, there's no reason to suspect foul play at all. 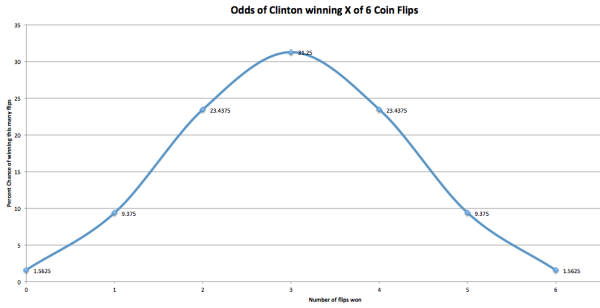 Ethan, you once lived in Wisconsin (Packer Fan?), did you see the Packers/Cards Coin Non Flip?
https://goo.gl/6ZuphV

That was pretty weird. Didn't detract from the super hail mary. though. (IMO) Pity the refs were so one-eyed throughout the game.

PJ, Wowzer has not posted in over 24 Hours here. Could God have answered my prayer and Wowzer has been hit by one of those Big Red Double Decker Buses, or is this 24 hour period just an anomaly?

Ragtag Media,
I can only wonder...But I don't wish him harm at all actually, just that he suddenly discovers the concept of self editing and/or a sense of shame and just wants to die of embarrassment for all the foul nastiness he mistakes for his personal genius.

It is possible WOW is unwell, had an accident, has not paid the electricity bill, etc. Do you really wish him such bad thoughts?

Glad to see I'm not the only person who can't stand "Wow". He's a complete stereotype. There's someone just like him on every message board. He condescends and actually acts as if being pretentious is a good thing. And everyone knows full well that he'd NEVER speak that way to someone in real life. It's just sad that a blog as intelligent as this one has been infected by one of these losers.

"It is possible WOW is unwell, had an accident, has not paid the electricity bill, etc. Do you really wish him such bad thoughts"

Well, IMO the world AND universe is a better place without her.

As an aside, here is an update for Ceres if you have not seen this yet :-
https://www.nasa.gov/feature/jpl/new-animation-takes-a-colorful-flight-…
:)

Thank You PJ, that was a very nice aside.
Would be even better with a tombstone discovered there labeled Wow,,,R.I.P.
::)