Throwback Thursday: What is the Strong Force? (Synopsis)

“I found I could say things with color and shapes that I couldn’t say any other way — things I had no words for.” -Georgia O’Keeffe

We thought -- back in the time after Maxwell -- that if we understood gravitation and electromagnetism, we'd understand all the forces in the Universe. But once we started to dive inside the atom, and once we discovered the atomic nucleus, a new puzzle arose. 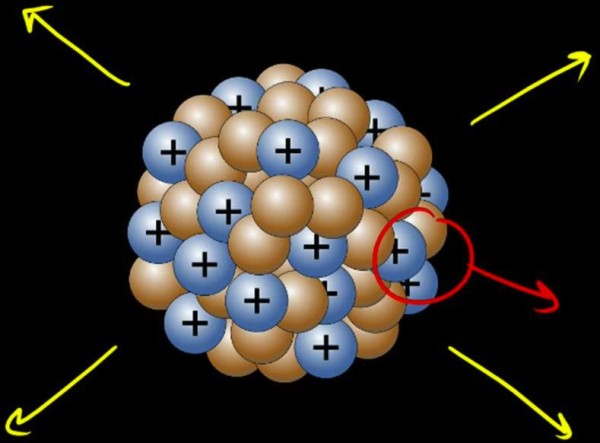 You see, every atom other than hydrogen had multiple protons (and neutrons) inside of it. Yet if the protons had a positive electric charge and the neutrons had no electric charge, wouldn't that intense repulsion between like charges drive all nuclei apart? But clearly that wasn't what was happening in our Universe; something extra must be holding these nuclei together.

It took us decades to figure it out, but that's what the strong force does. Come find out how it works!

I've been wondering - how can an exchange of photons result in attraction between opposite electric charges? It would seem that this would always cause a repulsion, since photons have momentum. Or is there time reversal or negative energy somehow involved?

I think understand the non-existence of the 9th gluon but I want to make sure.

The gluons are acting like 4 dimensional waves that oscillate in x, y, and z along a time axis. The 9th gluon doesn't exist because in that gluon the x, y, and z oscillations are all canceled out.

Therefor the 9th gluon would just be a straight line with no wavelength, and accordingly no energy. The gluon has zero rest mass so if it also has zero engergy then it doesn't exist. Is that right?

@Gary S: If you try to think of photons and charge carriers as little classical billiard balls, you're going to get into trouble. If you have the math background, you can go to a first-year quantum field theory text (like Bjorken & Drell) to see how it works. Without the math, what you'll get (below) is a very approximate hand-waving argument which doesn't sound right, because it's being done without the proper math.

The "photons" which are exchanged between charges do not exist in isolation. They are approximations to what the full electric field is doing. In particular, when you try to calculate "one photon exchange," the momentum you put into the calculation is multiplied by the charges at each end. For like charges, this results in a momentum transfer which pushes the charges apart, but for opposite charges the momentum transfer pulls them together.

Either those work for layman explanations,Gary. Simplified models, but accurate enough to explain "how can it be?".

@Denier #4: That's not quite right. Using Feynman graph terminology (appropriate for the "single photon" model), four-momentum is conserved at every vertex, and the propagator ("virtual photon") does carry four-momentum between the two vertices. When you compute the matrix element corresponding to the diagram, you get a non-zero result for the case where the momentum transfer corresponds to the classical expectation, and the farther from classical you are, the closer to zero (with a phase such that integrating over all the possibilities cancels them out).

Michael, to be fair to denier, your explanation is more closely aligned to the actual statement of theory, but includes a shitload of things that aren't needed for anyone who hasn't done advanced maths or university grade maths-heavy subjects.

Deniers' version is appropriate for that of others who spent their time learning something else.

"Virtual" there is your "graph terminology" and the virtual particle "standing bridges" your four-momentum transfer.

Someone who hasn't done vectors and advanced physics covering non-classical momentum terms won't be any better off reading your post #6 than if they never heard any of the answers.

With denier, they would.

If they wanted to know how those virtual particles did their thing, THEN they'd have to ask and your answer would be the next stage.

You're trying to bypass four years education and jump to a graduate level of understanding.

I don't believe that helps Gary.

very nice explanation, a color graphic for each point would be even better, most such descriptions are horribly confusing, it takes discipline to write in such a manner as to clarify a model, its not enough to know the model, the hard part is to articulate it to people who do not know the model, to do this you have to imagine yourself ignorant of what you are not ignorant of, you have to imagine what would confuse you were you not in the know, this takes empathy, it takes the ability to put yourself in another persons shoes, this is unfortunately beyond the ability of most science writers who do not have the strength to imagine themselves ignorant of what they already know, and so can not communicate what they know effectively.

this article and further comments were awesome. Frankly I didnt understand much, but I liked william and his merry-go- round statements :)
I shall read it again in the morning
great job done guys..