Throwback Thursday: What is the Weak Force? (Synopsis)

“Time is a sort of river of passing events, and strong is its current; no sooner is a thing brought to sight than it is swept by and another takes its place, and this too will be swept away.” –Marcus Aurelius

There are four known fundamental forces: gravitation, electromagnetism, the strong nuclear force and the weak nuclear force. But while we often speak of gravitation as an attractive force between masses (or anything with energy), of the electric force as charged particles attracting or repelling, of quarks and gluons attracting one another and keeping nuclei bound together, we describe the weak force as "responsible for radioactive decay." 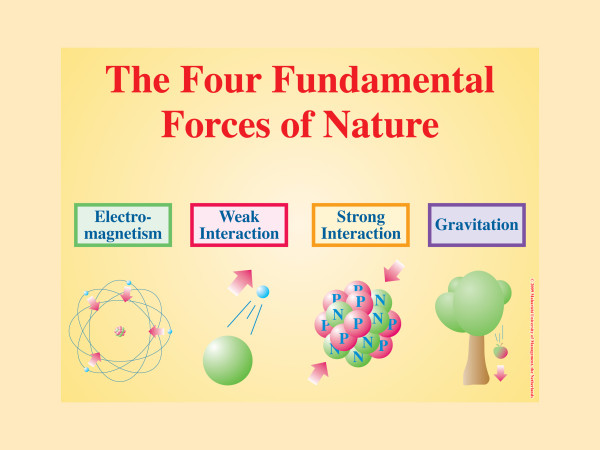 Is this right? Shouldn't the weak force, you know, be a force? Shouldn't there be a weak charge and attraction or repulsion based on that charge? As it turns out, there ought to be one, but due to the fact that it's less than one-millionth the strength of the electromagnetic interaction, we were unable to measure it. Until 2013, that is, when we did for the first time!

Come learn about the weak force, and the fact that it actually is a force.

You need to correct the spelling of neutron in the first figure just below the blog title. It's miss spelled (nuetron) in four locations.

J. Messick - Ethan is aware of the mistake, he points so out in the caption below the image. The misspelling is from the image creator himself, not Ethan

Is the Standard Model is variable?!? The photon mediates the electromagnetic force while the W and Z bosons mediate the weak force, early in the universe there wasn't a separate electromagnetic force and weak force. It was a unified electroweak force. Does this also mean there weren't separate Photons, W bosons, and Z bosons? Does the unification and breaking of the forces also mean a unification and breaking of the force carriers?

Grand Unified Theory is a theory to get all the forces meshed together.

Therefore there aren't four different forces to explain, there's only one, and the differences in the strengths and range is defined by the carriers.

The GUT would also be looking to get those to drop out inevitably from the formulation, removing yet more "magic numbers" from the standard model.

Whether this is possible to do is unknown, but it is an approach that worked before, has no definite reason not to work this time, and has several benefits in getting an explanation.

Cliff notes: Yes, they would merge under GUT, a form of the standard model.

Follow-up to my own question:

If the force carriers were indeed unified, would a WZ-Photon have mass?

@Denier #4: The electroweak force in the Standard Model is affected by (in fact, it was the inspiration for!) the Higgs mechanism of spontaneous symmetry breaking. At high energies, there is one single EW force, mediated by a set of three _massless_ bosons, the W+, W- and W0 which couple to weak isospin, and one massless boson, the B0, which couples to weak hypercharge.

If you introduce a Higgs field which couples to the EW field, then you can break the EW symmetry. What you end up with is that the W+ and W- acquire mass, and the W0 and B0 mix to produce a massive Z0 and a massless photon.

The detailed mathematics for this is laid out in the Wikipedia article on the electroweak interaction, or you can visit pretty much any first-year graduate text on QFT and the Standard Model.

With all apologies for the stupid question: We are talking 'AND' not 'OR'. Correct? You are saying the EW force is mediated by four simultaneous virtual particle links. In the pre-broken symmetry universe, a single boson could not communicate EW force. It takes a W+ link AND a W- link AND a W0 link AND a B0 link working in concert to communicate EW force. Now in the post-symmetry broken universe is takes a Z boson AND a W boson in tandem to communicate Weak force. A single Z boson by itself is not enough to mediate Weak force.

Am I understanding this correctly?

I believe that the mediator would be NEITHER those, but a "particle" that would decay into both those if the energy density of the universe were too low to keep it as a real particle.

Indeed the thought is that it is this gestalt entity that we have mediating, but only the aspects with enough energy from the interaction to appear as real are ones we see.

When the universe is open enough for us to see the whole animal, we see the elephant and call it that. But we can see the tusk, the trunk, the legs, bum, ears and all of it.

And instead of working out how each bit came to be, we can leave it as explaining how the ELEPHANT came to be. And seeing whether the theories of elephangenesis also explain why the ears happen to be that big, not bigger, why the tusks developed that curve. And a theory that creates those features without special pleading or magic numbers (or the east count of magic numbers) will be the forerunner in the race to explain that elephant.

NOTE: One reason for supersymmetry and multiple dimensions to be proposed is that the folding of the extra dimensions hides the entire elephant. High energies open them up, and the more dimensions we open, the more of reality we can see.

Colliders create small areas where the universe can have the energy to temporarily open up. And we can glimpse the universe with fewer obstructions to our view.

@Denier #8: You've misunderstood. The easiest way to describe it is with "tree-level" Feynman diagrams for different processes. If you have a process like neutron -> proton e- anti-neutrino, that is mediated (in our low energy Universe) by way of the weak W- boson: neutron -> W- proton, W- -> e- anti-nu. A different process, like K+ decay, is mediated by a W+ boson: K+ -> pi0 e+ nu == K+ -> W+ pi0, W+ -> e+ nu.
Each of the vector boson is an "aspect" of the same underlying force, but appears in the context of different particular interactions.

This is different from pure electromagnetism, where there's only one force carrier (the photon), which has to do the job everywhere.

Now, as Ethan explained in Comments of the Week, at high eneriges the W0 and B0 are both massless, and they can both take part in the same kinds of interactions. In quantum field theory, this means that they aren't distinguishable, and therefore "mix." When the symmetry is broken by the Higgs, that mixing happens with a specific mixing angle (theta_W), leading to the physically observed Z0 and photon.

Mike, despite being more accurate, your post was a hell of a lot less clear.

My lecturer in Solid State Physics had this problem too.Working out the Shroedinger Equation for a regular H+ lattice on the board, and thinking we were following it.

In reply to Throwback-Thursday-what-is-the-weak-force. Defining of Weak force in detail.
First of all we will classify the fundamental particles as under.

Please go to the following link and read

Care to give any reason to go there, what to expect?

I don't go to medium.com for the same reason: I don't have a clue what I'm supposed to find there and fear the consequences to my browser if I try.

I am happily surprised to see the Q-weak result presented here, which I was involved with.

Some comments on the weak charges, in case you're interested.
The weak force has a V-A structure (Vector-Axial), so one can define a weak "vector charge" and an "axial charge". The quoted results are for the vector part of the weak charge of the proton -- this is the part that is analogous to the electric charge(*).

You may have heard that the weak interaction has a "perfect" V-A structure and is therefore maximally parity-violating. This in fact is only true for the _charged_ weak interaction. The neutral weak interaction, characterized by the exchange of the Z, has a parity-conserving component. You can think of it as the effect of the B0 field.
The photon and the Z are made of the same two "primordial" fields, the B0 and W0, which means that wherever a photon can be exchanged a Z can as well.

What I think is truly sexy in this field is the weak mixing angle, the SM prediction for its "running" (dependence on Q2) and comparison to experimental predictions:
http://cds.cern.ch/record/2030725/files/runningWeinbergSM.png
While the weak mixing angle is not an observable but rather a theoretical construct, it becomes extremely useful at comparing experimental results in different energy scales and the theory. Experimental data in that plot have been obtained from low-energy measurements of atomic transitions, electron-electron and electron-proton elastic scattering, deep-inelastic electron-deuteron scattering, neutrino DIS, and measurements on the electron-positron and hadronic colliders. There is a plethora of beyond-SM scenarios that are being accessed through these measurements!

(*) Formally, the vector-weak charge is the Q^2->0 limit of the electric Sachs form factor that characterizes the proton structure accessed by the Z-exchange, exactly like the electric charge for the photon-exchange.