"Were the succession of stars endless, then the background of the sky would present us a uniform luminosity, like that displayed by the Galaxy-since there could be absolutely no point, in all that background, at which would not exist a star." -Edgar Allan Poe

The master of the macabre, little known to most, was actually a very curious and astute armchair scholar of the cosmos. And when he looked out at the physical Universe, one of the most puzzling facts about it was the darkness of the night sky itself. Back in the 1820s, Heinrich Olbers put forth his famous paradox: that if the night sky was filled uniformly and infinitely with stars, eventually the human eye should encounter one in any and all directions.

Image credit: James Schombert of the University of Oregon, via http://abyss.uoregon.edu/~js/ast123/lectures/lec15.html.

Yet the darkness of the night sky clearly showed this was not the case! In modern times, the Big Bang provides a solution to this by showing that there is a finite age to the Universe, and hence a time before which there were no stars. There is a leftover glow, but it's redshifted into the microwave region, visible as the CMB. And perhaps surprisingly, Poe -- writing in 1848 -- proposed a very Big Bang-like solution to Olbers' paradox! 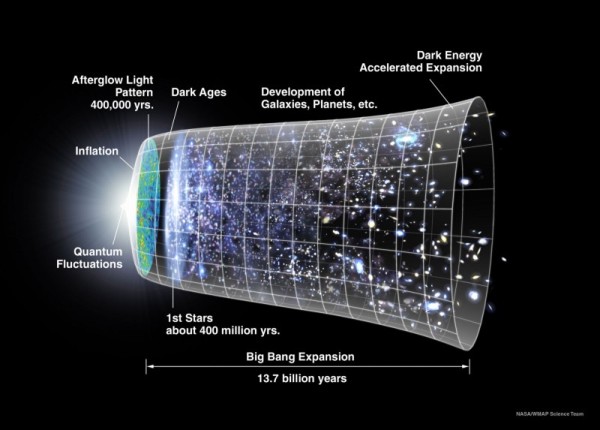 Go take a look inside thanks to the historical research of Paul Halpern, and see what the literary genius anticipated, and missed, over on Starts With A Bang!

“One has to be an optimist; one has to hope that somewhere there’ll be new measurements to be made and that they will open up new vistas for us theorists to play with.” -Jim Peebles It was one of the most hotly contested questions for decades: we first expected and then found supermassive black…

Comments of the Week #67: from Dark Matter to the Planets

“If somebody's going to pay money to come see you perform, then it should be something to see.” -Michael Trent The past two weeks at Starts With A Bang have been awesome for all we've covered, even with a (brief) vacation on my part thrown in there. (Don't worry, you'll get the best of it this…

The Dark Depths of the Universe

"By denying scientific principles, one can maintain any paradox." -Galileo Galilei Day and night. It seems like the simplest, most natural thing about our world, that the Sun illuminates one half of the Earth at a time. Image credit: Public Domain Image from Desktop Wallpaper HD. While the Earth…

The Evolution of Starlight

“Aristotle taught that stars are made of a different matter than the four earthly elements— a quintessence— that also happens to be what the human psyche is made of. Which is why man’s spirit corresponds to the stars. Perhaps that’s not a very scientific view, but I do like the idea that there’s a…

Thanks. I never knew about this fascinating aspect of Poe. Some very good is highly speculative reasoning, which I woulda thunk required someone with mathematical training.

I first came across Olbers' paradox in an essay by Isaac Asimov in the magazine, "Fantasy and Science Fiction"

I now know that the explanation given is wrong! Even in an infinite, eternal universe, the radiation reaching earth would not be infinite, since different shells interfere with each other.

" 'Too little energy': Originally proposed by American cosmologist Edward Harrison in 1964. It was derived after computing the amount of energy required to create a bright sky, and finding out that it implies an overwhelming large number: the observable universe would need 10 trillion times more energy than it currently shows. This means that even if all matter in the universe were transformed into energy according to Einstein’s famous formula, the night sky would be barely brighter than it really is. This argument is truly one of the few heavy weight solutions to the riddle. "

Poe not only had some pretty remarkable speculations regarding the origin of the universe, but he was a pretty fair amateur sleuth, also. Acting like Nancy Drew, or the Hardy Boys, or Angela Lansbury in "Murder She Wrote", Poe solved an actual murder mystery by reading the papers. The story he wrote based on the actual murder was, "The Mystery of Marie Roget".

I now know that the explanation given is wrong! Even in an infinite, eternal universe, the radiation reaching earth would not be infinite, since different shells interfere with each other.

That's only why it isn't infinite in brightness. Not Olbers' paradox, which is that it is of the average intensity in every direction.

"That’s only why it isn’t infinite in brightness. Not Olbers’ paradox, which is that it is of the average intensity in every direction."

True, the universe DOES have a finite age, and it IS expanding, but in theory, Olbers paradox could be explained away if the distance between stars were large enough, the average intensity in each direction could be 3 K, or even higher, as long as it was low enough that we couldn't detect it solely with our vision.

"Olbers paradox could be explained away if the distance between stars were large enough, "

No, it could not. That can only work if the universe is finite in age or finite in extent or both.

That's the *point* of Olbers' paradox: you cannot have an infinitely old infinitely extended universe.

But Olber's paradox came well before expansion was noted, so is rather orthogonal to that proposition.

"Therefore, his prescient conclusion was an excellent example of the kind of proof by deduction a savvy detective would do — such as Poe’s famous fictional sleuth C. Auguste Dupin who employed deductive reasoning to solve mysteries."

No, that was induction, and it wasn't even close to a proof (which you only see in pure logic or mathematics). Please be careful with your terms.