“It is marvelous indeed to watch on television the rings of Saturn close; and to speculate on what we may yet find at galaxy’s edge. But in the process, we have lost the human element; not to mention the high hope of those quaint days when flight would create ‘one world.’ Instead of one world, we have ‘star wars,’ and a future in which dumb dented human toys will drift mindlessly about the cosmos long after our small planet’s dead.” -Gore Vidal

And yet, it isn't just the rings of Saturn that fascinate us, nor can we simply "watch them on television," as Gore Vidal sadly declared. Every twenty years or so, Saturn develops a tremendous storm, streaking white across its surface and eventually encircling the entire globe, lapping itself. 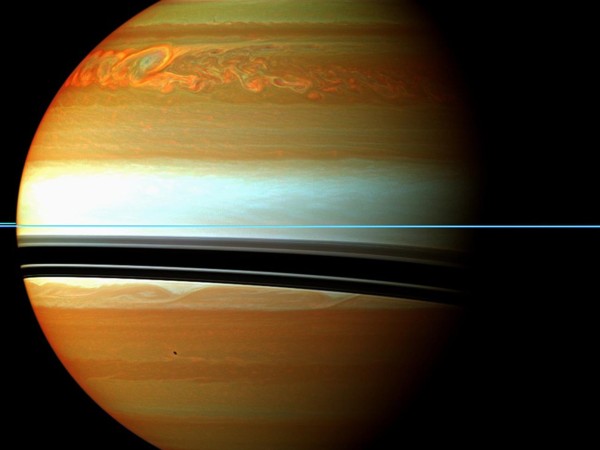 The 2010-2011 storm outdid itself, lasting more than eight months and becoming the largest storm since telescope technology advanced to the point where we could view them. Four years after it ended, we finally figured out the secret to what causes them, and why they only emerge every 20-to-30 years.

Come find out the story and the secret in pictures and no more than 200 words on Mostly Mute Monday!

The hexagonal polar storm is curious. It only seems to appear on one pole. A hexagonal polar storm has also been seen on Neptune, which means they're probably common on gas giants. Researchers were able to create hexagonal patterns in a lab along with ovals, triangles, squares, and septagonal (7-sided) shapes, but only hexagons have been seen on the gas giants. However, to get those shapes to form they had to create vortices on each side. The VIMS instrument on Cassini is able to peer deep enough into Saturn's atmosphere that it would see the vortices if they existed, but no such vortices appear. Very curious.