"Our spectroscopic observations reveal the galaxy to be even farther away than we had originally thought, right at the distance limit of what Hubble can observe." -Gabriel Bremmer

One of the holy grails of cosmology is to measure, directly, exactly when the first stars and galaxies formed in our Universe. The Hubble Space Telescope has been pushing the distance record farther and farther back, with its measurements typically confirmed by ground-based, spectroscopic follow-ups. This time, however, the new record-holder was so distant that confirmation needed to be done from space: by Hubble itself. 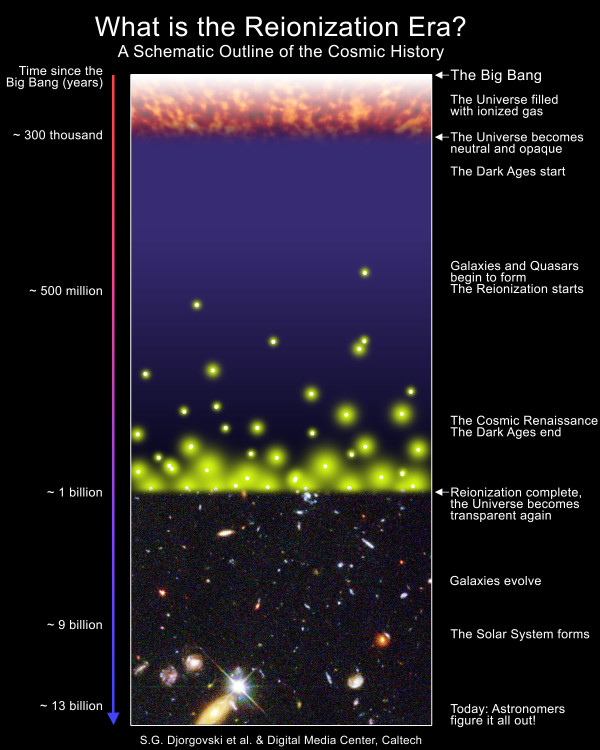 The result? A galaxy at a redshift of z=11.1, from when the Universe was just 400 million years old, or a mere 3% of its current age. This is a record that will likely stand until the James Webb Space Telescope launches, as it took a combination of incredible work and incredible luck to find a galaxy this far back with our current technology. 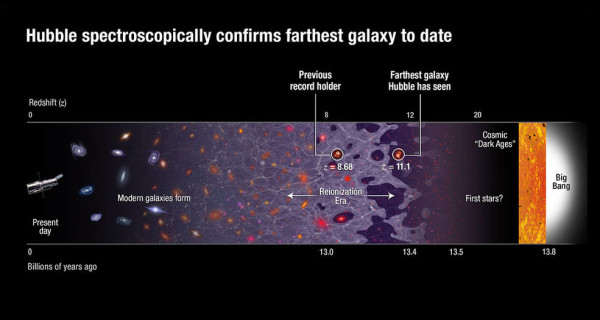 Go get the full story, and learn why this was so unlikely (and how we got lucky), over on Forbes!

"We’ve taken a major step back in time, beyond what we’d ever expected to be able to do with Hubble. We see GN-z11 at a time when the universe was only three percent of its current age." -Pascal Oesch Arriving at our eyes after a journey of 13.4 billion years, the light from galaxy GN-z11 has been…

The first galaxies: what we know and what we still need to learn (Synopsis)

"For the first time we can learn about individual stars from near the beginning of time. There are surely many more out there." -Neil Gehrels We’ve come incredibly far in our quest to learn how the Universe came to be the way it is today. We can see out in space for tens of billions of light years…

Ask Ethan: Are There Different Types Of Time And Space? (Synopsis)

“A human being is part of a whole, called by us the Universe, a part limited in time and space. He experiences himself, his thoughts and feelings, as something separated from the rest a kind of optical delusion of his consciousness. This delusion is a kind of prison for us, restricting us to our…
Advertisment