The first galaxies: what we know and what we still need to learn (Synopsis)

"For the first time we can learn about individual stars from near the beginning of time. There are surely many more out there." -Neil Gehrels

We’ve come incredibly far in our quest to learn how the Universe came to be the way it is today. We can see out in space for tens of billions of light years, to galaxies as they were when the Universe was only a few percent of its present age. We can see how galaxies evolve, merge and the stars inside change. And we can see to even before that, when no stars or galaxies existed at all. 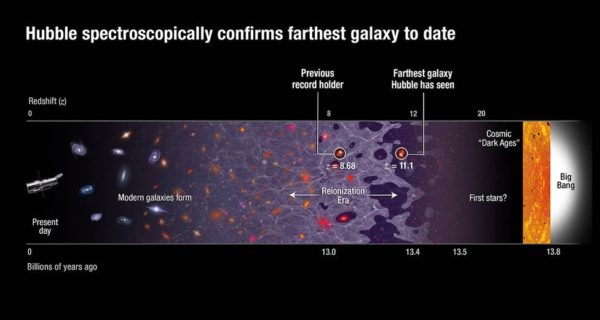 The farthest galaxy known to date, which was confirmed by Hubble, spectroscopically, dating back from when the Universe was only 407 million years old. Image credits: NASA, ESA, and A. Feild (STScI).

But how did we get from there to here? There are still plenty of gaps in the story. We’ve never seen the first stars or galaxies; we’ve never witnessed the start of cosmic reionization; we’ve never seen the star formation rate jump from zero to a real, finite number. Yet with James Webb and WFIRST on the horizon, these gaps in our knowledge may – if we’re lucky – all disappear. 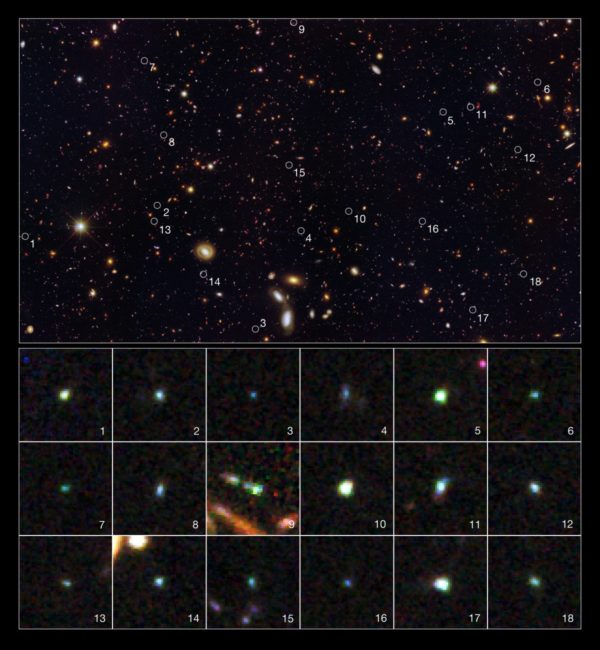 This deep-field region of the GOODS-South field contains 18 galaxies forming stars so quickly that the number of stars inside will double in just 10 million years: just 0.1% the lifetime of the Universe. Image credit: NASA, ESA, A. van der Wel (Max Planck Institute for Astronomy), H. Ferguson and A. Koekemoer (Space Telescope Science Institute), and the CANDELS team.

Come get the story on what we know about the first galaxies, and what we hope and have left to still learn!

"The wonder is, not that the field of stars of so vast, but that man has measured it." -Anatole France If you could gather 250 million times as much light as your eye, and improve your resolution by several orders of magnitude, you just might be able to see what the Hubble Space Telescope can. By…

"Our spectroscopic observations reveal the galaxy to be even farther away than we had originally thought, right at the distance limit of what Hubble can observe." -Gabriel Bremmer One of the holy grails of cosmology is to measure, directly, exactly when the first stars and galaxies formed in our…

"For the first time we can learn about individual stars from near the beginning of time. There are surely many more out there." -Neil Gehrels We know what NASA’s James Webb and WFIRST are designed for, and we know what we expect to find. James Webb will be the largest space telescope ever, focused…

We have known, always, the epoch that came before the first observable stars and galaxies, visible to the naked eye; plain to see in the night-time sky; particularly bright on a moonless night.

No. We don't. There isn't. Not even on a moonless night.