"Quintessence is a dynamic, time-evolving, and spatially dependent form of energy with negative pressure sufficient to drive the accelerating expansion [...] Whereas the cosmological constant is a very specific form of energy." -Robert Caldwell, inventor of the Big Rip scenario

Our Universe began with a period of cosmic inflation: where energy intrinsic to space itself caused an extremely rapid, exponential expansion. This stretched the Universe flat, gave it the same properties, temperature and spectrum of fluctuations everywhere, and then gave rise to the hot Big Bang. And our Universe is ending in a blaze of dark energy, driving the Universe apart with an extremely slow (but accelerating) exponential expansion, that will stretch the Universe flat, and give it the same properties and temperature everywhere. 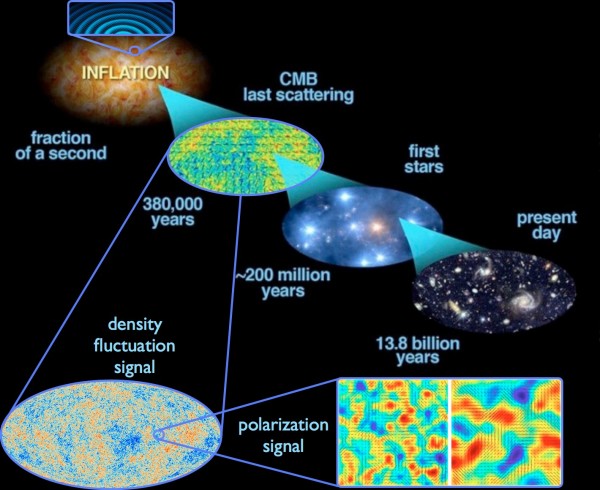 Fluctuations in spacetime itself at the quantum scale get stretched across the Universe during inflation, giving rise to imperfections in both density and gravitational waves. Image credit: E. Siegel, with images derived from ESA/Planck and the DoE/NASA/ NSF interagency task force on CMB research.

Would it be possible that these two phenomena aren't only related, but that dark energy could result in the Universe recycling itself, creating a new hot Big Bang after a long enough period of time? Realistically, there are two possible ways for this to happen, although the data presently don't favor either one. 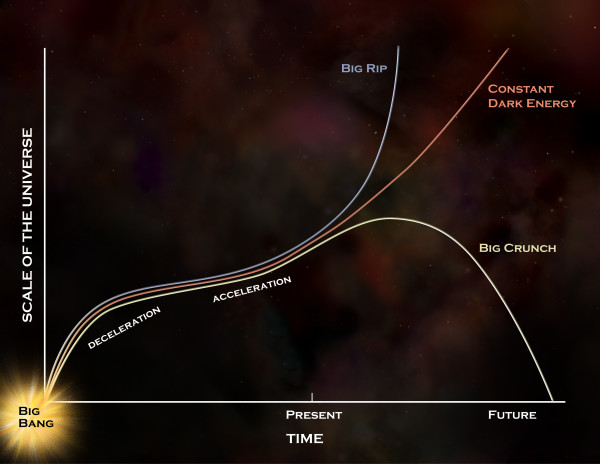 The different ways dark energy could evolve into the future. Remaining constant or increasing in strength (into a Big Rip) could potentially rejuvenate the Universe. Image credit: NASA/CXC/M.Weiss.

Go get the whole story on this edition of Ask Ethan! (And my apologies that you won't get any new Starts With A Bang until Monday; I'm away at a conference in Memphis now!)

5 scientific myths you probably believe about the Universe (Synopsis)

"Because philosophy arises from awe, a philosopher is bound in his way to be a lover of myths and poetic fables. Poets and philosophers are alike in being big with wonder." -Thomas Aquinas Sure, you've studied a little physics. You know about Einstein and General Relativity, the quantum nature of…

The Big Bang Wasn't The Beginning, After All

"Despite its name, the big bang theory is not really a theory of a bang at all. It is really only a theory of the aftermath of a bang." -Alan Guth Did the Universe begin with the Big Bang? When we discovered the cosmic microwave background, and its properties matched exactly the prediction of the…

The Universe itself may be unnatural (Synopsis)

Physicists Must Accept That Some Things Are Unknowable (Synopsis)