"Although impact processes dominate the surface geology on Ceres, we have identified specific color variations on the surface indicating material alterations that are due to a complex interaction of the impact process and the subsurface composition." -Ralf Jaumann, Dawn scientist

NASA's Dawn mission has just revealed a huge suite of data about Ceres, our Solar System's closest dwarf planet. No longer merely taking pictures, at its orbital altitude of just 240 miles (385 km), it's now gathering information from many instruments, measuring the chemical composition and neutron/gamma ray fluxes from the surface. 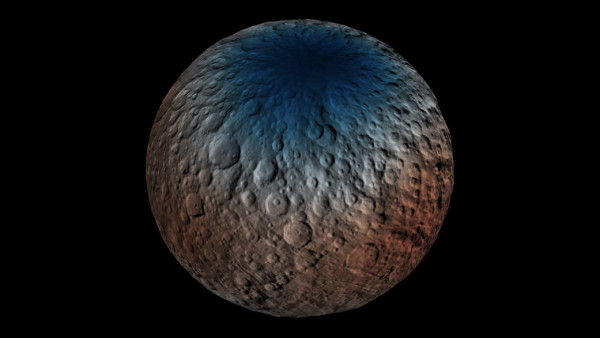 This map shows a portion of the northern hemisphere of Ceres with neutron counting data acquired by the gamma ray and neutron detector (GRaND) instrument aboard NASA’s Dawn spacecraft. Image credit: NASA/JPL-Caltech/UCLA/ASI/INAF.

Three big surprises have emerged, including a new theory for the salt deposits in Occator crater, the possible existence of sub-surface icecaps at the poles, and a new set of white spots in Oxo crater, which are water-ice after all! 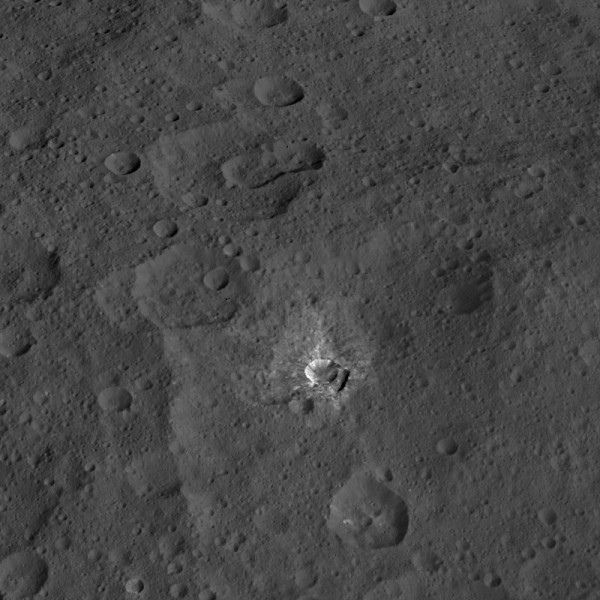 Go get the full story over on Forbes!

I'm having a hard time reconciling finding #1 and finding #2.

Finding #1 - An impactor [in the Occator crater located less than 20 degrees north of the equator] kicked up sub-surface volatiles and water. Minerals dissolved inside the water, and when the water evaporated/sublimated, the salts were left behind.

Finding #2 - The likely presence of sub-surface ice, but only at the poles.

If both #1 and #2 are correct, where did the briney water geysering up from the bottom of the Occator crater come from?

Impactors dump a lot of random energy into a system, and that means heat.

Aside: For about a week, when I've tried to get in to posts here by clicking on the "read more" link on the main page, I get this message.

Your connection is not private
Attackers might be trying to steal your information from scienceblogs.com (for example, passwords, messages, or credit cards).

I think it's scienceblogs itself. Https is given for the link,but there's no certificate for https.

I would suggest changing the https to http and connecting again. Don't just add the cert, it can be abused.

it will keep offering you https, not necessarily all the time, just keep changing it.

@dean #3
Your connection is not private
Attackers might be trying to steal your information from scienceblogs.com (for example, passwords, messages, or credit cards).
It happens when the links use 'https' instead of 'http' in the URL. If that message comes up, just delete the 'https://' off the front of the URL and the page will come up. No one is trying to steal anything, it is just a misconfiguration of the ScienceBlogs server.

Thanks to both. Your implied messages that I hadn't taken the time to look at what the browser said is correct. :)

The title of the Forbes article –
“NASA's Dawn Probe Solves Dwarf Planet Ceres' Multiple Mysteries" –
sure does give the impression that Ceres’ mysteries were, you know, like, *solved*.

But then, in the body of the article, I read that regarding “The ultra-bright spots inside Occator crater”, *three* *possible* explanations exist so far.

Then, I read about “the *likely* presence of sub-surface ice, but only at the poles”.

Finally, I see that, for “the second brightest crater on Ceres, Oxo”, it’s “*most likely* very young”, and that “*Either* it’s one of the most recent impact craters, and practically all impact craters dredge up subsurface water, *or* there’s been recent landslide that exposed this water.”

Ethan, do you write the headlines, or does a sensationalist editor?

Not enough pareidolia for you, or just starved for attention?

P.S. Explain hydrostatic equilibrium in your own words or again be mocked as not just a dimwit but also a coward.

^ Then again, one might also wonder about the internal consistency of S.N.'s approach to evaluating content and general standards for satisfaction with headlines.

about the connection. The issue is that scienceblogs has a faulty SSL certificate. Faulty in a sense that it's self-signed and not issued by verified company. Just means that the traffic and comments you post can be viewed by other party if they have the same SSL... but since we're not leaving out credit card info here, no reason to worry.

On the other hand, scienceblogs as a whole not willing to spend 100$ on a proper SSL is a bit weird to say the least.

Sinisa;
Yeah, I've noticed that now. I wasn't concerned, just surprised (and, as I admitted, didn't pay attention to what the browser was saying). Thanks.

Narad: several months ago on Evolutionblog s.n. made some surprising comments about research articles he claimed supported his distorted comments about some issue in evolution: when it was pointed out that they actually flatly contradicted what he was saying he danced around and admitted he hadn't read them, but had based his opinion on the "headlines" in the journals and blamed his confusion on the "headline writer" for those journals. Honesty/integrity have never been traits of his.