99.8% Wrong: How NASA's Fermi Scientists Are Fooling Themselves About Gamma Rays From Black Holes (Synopsis)

"That’s the next step: to simultaneously see [gravitational waves] with three, four or five interferometers, localize it quickly, within minutes, and have other observatories catch it instantly, and catch it in the optical or the X-ray bands. That’s going to provide a whole new understanding in these cataclysmic events." -Dave Reitze, executive director of LIGO 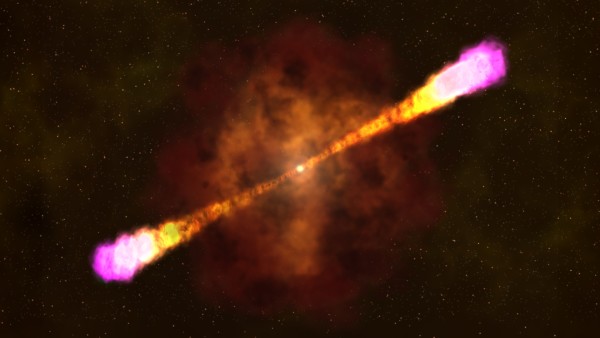 Could this have been a surprising accompaniment to the black hole-black hole merger? It’s possible, but there are three strikes against it: the data has less than 3σ statistical significance; the orientation of the signal to the satellite was out of the optimal range for detection; and the ESA’s Integral satellite saw null results looking for the same effect. In other words, not only is the jury still out on whether these gravitational wave events have electromagnetic counterparts, but you should be very skeptical about Fermi’s reported results!

Image credit: ESA–C.Carreau, of the “ripple” effect on spacetime that a passing gravitational wave imparts.

The gravitational waves are real, but the gamma rays? Get the whole story today!

"What's really exciting is what comes next. I think we're opening a window on the universe -- a window of gravitational wave astronomy." -Dave Reitze On September 14, 2015, LIGO directly detected gravitational waves for the first time, from the inspiral-and-merger of two quite massive black holes.…

"It turned out that nature was very kind, and there appear to be many of these black holes in the Universe and we were lucky enough to see one." -Dave Reitze, executive director of LIGO On September 14th, 2015, just days after turning on, the twin Advanced LIGO detectors detected the first…

"The black holes collide in complete darkness. None of the energy exploding from the collision comes out as light. No telescope will ever see the event." -Janna Levin Whenever there’s a catastrophic, cataclysmic event in space, there’s almost always a tremendous release of energy that accompanies…

You state that "... detected an unambiguous gravitational wave signal from two merging black holes some 1.3 light years distant." I imagine they were further away than that.

Ethan, you left off a factor of 1.e9 on the distance to the merger event. Hope there is still time to fix it.

“But from the observational viewpoint, there are a few *major bumps in the road*.
•First off, a “false alarm probability” of *0.22% is actually quite high*, for physics standards! When we want to claim an event as a genuine detection, we require confidence levels where our statistics are robust at the 5σ-level of significance. That corresponds to odds of a false alarm of 0.00003%, or one-in-3.5 million. What we have is something that’s got a one-in-454 chance of being a false alarm, making it just a 2.9σ-level significant event.

In other words, that “0.22%” chance actually indicates that there’s a high probability this signal is, in fact, a false alarm.”

Thought experiment. Suppose one or both of the merging BHs have an accretion disk. Presumably this disk undergoes severe distortion during the event. Most likely some of it falls in, and some gets violently flung out. Wouldn't that create some sort of a burst? Has something like that been simulated? Do we even know how to do the computation?

Heck, the matter falling in to the event horizon doesn't reach it, so when they merge, you'd get bursts from that matter being forced in.

Two caveats to that, though.

1 angular momentum means you'd get jets at the normal to the plane of the binary merger, and we're probably not along the axis of that
2 it will still be redshifted, though the deeper in it is, the more matter will be involved in extinction, so the intensity curve is not simple to calculate

Simulation of ideas will be used by those trying to prove the claim right when trying to show evidence it doesn't happen that way fails to do so, since this is how scientists (as opposed to faithiest morons) think. They try to find evidence against their claims as hard as possible to test (the old and correct meaning of the word "prove") whether they're wrong.

All fair and square … in the meantime we're all still waiting for the announcement of the second LIGO discovery.

and interesting piece of code.. for research
https://www.khanacademy.org/cosmology-and-astronomy/challenge-modeling-…

Is that first image a Galactic Size pig poking his snout into our universe?

According to traditional knowledge the mass of a Black Hole has a greater mass of gravitational attraction than any finite volume of mass in any wave length segment of electromagnetic radiation. This includes all wave lengths of light that we can't see except the ones that are transmuted by objective phenomena like matter and are reflected back to us for perception.
We see bilateral jets from active Black Holes but not its radiation per se. What we see is only that energy that is reflected off of matter that the invisible jets themselves create.

There is no such thing as a "mass of gravitational attraction" thus no.. black holes DON'T have greater mass than other objects. And no, there is no transmutation of light by any "objective" phenomena (whatever that means).

So, to sum up, don't know what "traditional" knowledge you are going by, but it's very wrong.