The biggest question about the beginning of the Universe (Synopsis)

"Space is certainly something more complicated than the average person would probably realize. Space is not just an empty background in which things happen." -Alan Guth

If you go back in time, earlier and earlier, things get hotter, denser and more energetic. But there's a limit to how far back you can go, and that limit doesn't end in a singularity with the birth of time and space; instead, it ends with a period of cosmic inflation, which set up the hot Big Bang as we know it. 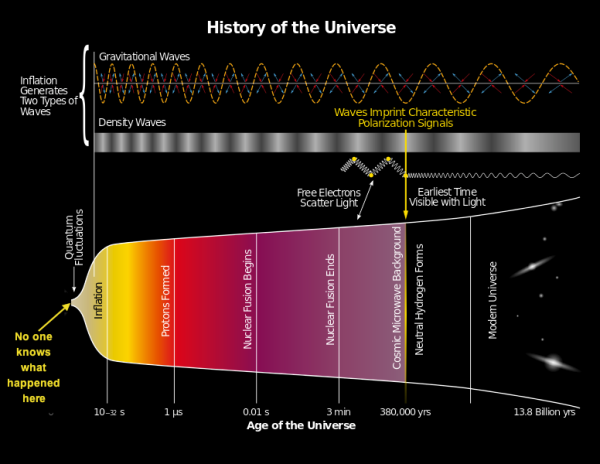 For a long time, inflation was pure theory. Recently, however, detailed observations of the density fluctuations in the Universe have not only confirmed it, but have allowed us to better understand which models of inflation might actually describe our Universe. If our modeling is correct and the data continues to improve, we just might come to understand how the Universe came to be this way after all. 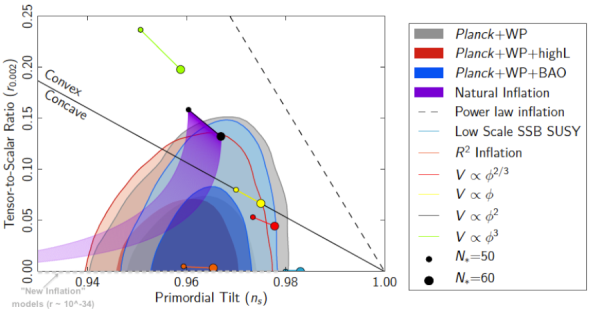 Various models of inflation and what they predict for the scalar (x-axis) and tensor (y-axis) fluctuations from inflation. Image credit: Planck Collaboration: P. A. R. Ade et al., 2013, A&A preprint, with additional annotations by E. Siegel.

Here's the status of where we are now, how we'll head further down the path and possibly even find the ultimate answer!

The Beginning of the Universe and the Limit of Knowledge

"Despite its name, the big bang theory is not really a theory of a bang at all. It is really only a theory of the aftermath of a bang." -Alan Guth So you finally understand it. The Big Bang tells us that the Universe was hotter, denser, and expanding at a faster rate in the past. Image credit:…

What is the future of gravitational wave astronomy? (Synopsis)

"We shall not cease from exploration, and the end of all our exploring will be to arrive where we started and know the place for the first time." -T.S. Eliot Now that not just one but two gravitational wave events have been directly detected, we're officially in the era of true gravitational wave…

“Scientific ideas should be simple, explanatory, predictive. The inflationary multiverse as currently understood appears to have none of those properties.” -Paul Steinhardt, 2014 Cosmic inflation is alternately talked about by serious scientists as either the definitive beginning to our Universe,…

Hi Ethan, is there a Forbes link missing for this topic?

Thanks, RM, appreciate it.

Ethan,
I tried to submit a comment tonight over on your "Jupiter" blog thread but my comment never showed up.

Have I been banned?

"Have I been banned"
Seriously See Noevo?
As long as Wow is allowed to prance around here in parachute pants or spandex vernacular. You should feel safe in your own Idiolect.

It would be because you deserve it an, from your history of lies and refusals to listen or be honest. The fact this latest post of yours appears is a sad thing.

This article begins with a quote from Alan Guth, the inventor of Inflation.

Alan and others say, I think, that Inflation successfully “predicts” certain things found in the cosmos and solves certain problems in Big Bang Theory.

Observation:
It seems to me that this invention (i.e. Inflation) is considered to *surprisingly* find and fix the very things it was invented to find and fix.
Fascinating!

Anyway, here’s some of what Alan’s invented Inflation involves:

“… Guth points out that at extremely high energies, there are forms of matter that upend everything we learned about gravity in high school. Rather than being the ultimate force of attraction that Newton and his falling apple taught us, gravity in this case is an incredibly potent force of repulsion. And that REPULSIVE GRAVITY was the fuel that POWERED THE BIG BANG.
The universe… began from a PATCH OF MATERIAL PACKED WITH THIS REPULSIVE GRAVITY. The patch was…one 100-billionth the size of a single proton. But the repulsive gravity was like a MAGIC WAND, doubling the patch in size every tenth of a trillionth of a trillionth of a trillionth of a second. And it WAVED ITS DOUBLING POWER over the patch about 100 TIMES IN A ROW, UNTIL it got to the size of that MARBLE. All that happened within a hundredth of a billionth of a trillionth of a trillionth of a second. As a point of comparison, the smallest fraction of time that the average human can detect is about one-tenth of a second.
The ingredients of what would become our entire observable universe were packed inside that marble. While the density of ordinary material being put through that kind of exponential expansion would thin out to almost nothing, A QUIRK OF THIS REPULSIVE GRAVITY-MATERIAL ALLOWED IT TO MAINTAIN A CONSTANT DENSITY AS IT KEPT GROWING. BUT AT A CERTAIN POINT — while the universe was still a tiny fraction of a second old — INFLATION ENDED. That happened BECAUSE the REPULSIVE-GRAVITY MATERIAL was UNSTABLE, and, like a radioactive substance, it BEGAN TO DECAY. As it decayed, it released energy that produced ordinary particles, which in turn formed the dense, hot “primordial soup.” At that point, after Guth’s model has explained what banged, why it banged, and what happened before it banged, he takes a bow and lets the standard Big Bang theory take over from there.”

This, and other interesting tidbits, can be found at
https://www.bostonglobe.com/magazine/2014/05/02/alan-guth-what-made-big…

Whatever weird fantasy you have, teabagger, please keep your sick perversions to yourself.

TIA, the rest of the world.

See nowt, fuck off to the thread that seems to have been purpose built for you now you've given up ALL pretense that you're here for any honest reason:

come back when you're willing to participate in a science discussion.

Yes we know you find all this science stuff hard to believe. Got anything else? Hey I know! You haven't told us that science is fallible and that there are questions Inflation doesn't answer. Why don't you go for the fallacy hatrick?

It seems to me that this invention (i.e. Inflation) is considered to *surprisingly* find and fix the very things it was invented to find and fix.

I see that special relativity is now in trouble, as well.

@Narad: Not to mention all of quantum mechanics.