"The self-same atoms which, chaotically dispersed, made the nebula, now, jammed and temporarily caught in peculiar positions, form our brains; and the 'evolution' of brains, if understood, would be simply the account of how the atoms came to be so caught and jammed." -William James

When stars like our Sun run out of fuel, they expand into red giants, start fusing helium in their cores, blow off their outermost layers very slowly, and then their insides die. They heat up even further, contract down to white dwarfs, and the intense ultraviolet light ionizes and illuminates the blown-off material. 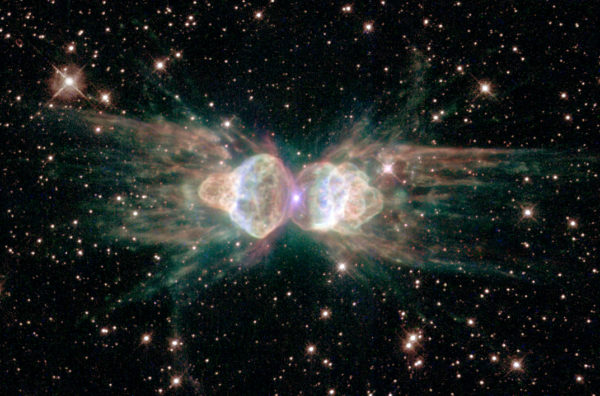 But that material isn’t spherical, but rather lights up primarily as two bipolar jets! Even for stars that rotate slowly, the law of conservation of angular momentum still applies, meaning that even if it takes days, months or years for these giant stars to rotate, almost all of them still have a preferred axis. It also means our Sun very likely will, as well. 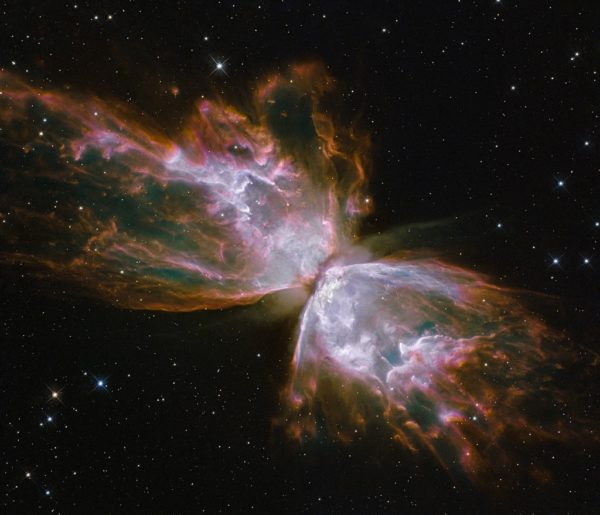 The Butterfly nebula, perhaps the most beautiful of them all: Planetary Nebula NGC 6302. Image credit: NASA, ESA and the Hubble SM4 ERO Team.

Go get the whole story for today’s Mostly Mute Monday!

The secret of the galaxy's most famous nebula (Synopsis)

“The self-same atoms which, chaotically dispersed, made the nebula, now, jammed and temporarily caught in peculiar positions, form our brains; and the ‘evolution’ of brains, if understood, would be simply the account of how the atoms came to be so caught and jammed.” -William James Summer is coming…

The lives and deaths of Sun-like stars

"Man alone is born crying, lives complaining, and dies disappointed." -Samuel Johnson But the stars, as opposed to humans, are born shining, with hundreds (or more) of brothers and sisters, shine ever more brightly over their lifetimes, and die in spectacular fashion. As far as we can tell, here's…

This is what it looks like when a Sun dies (Synopsis)

"A bit of mould is a pleiad of flowers; a nebula is an ant-hill of stars." -Victor Hugo In the distant future, about 7 billion years from now, our Sun will run out of all the nuclear fuel it’s capable of burning in its core. As it contracts under its own gravity, radiation becomes unable to hold it…
Advertisment