Young Stars Are Missing From Our Galaxy's Center (Synopsis)

"This suggests a lack of Cepheids in the inner 2.5 kpc region of the Galactic disc except the [Nuclear Stellar Disc]." -N. Matsunaga et al.

If you want to find where all the young stars in a galaxy are, you look for the densest regions of gas and dust: the locations where new stars and star forming regions are most likely to occur. In the Milky Way, like all spirals, we expect this to be in the galactic plane, along the spiral arms, and in the innermost region of the disk and bulge.

A multiwavelength view of the very center of the Milky Way galaxy, including X-ray, visible, infrared and radio light. Image credit: NASA/JPL-Caltech/ESA/CXC/STScI.

When we look in the wavelengths capable of seeing this -- and looking for Cepheid variable stars as tracers -- we find that our picture is confirmed absolutely everywhere, except the inner galactic disk. For some reason, in the inner 8,000 light years of the Milky Way, we find that it's almost completely devoid of young stars. This lines up with what we see in the radio wavelengths, but it turned something we thought was well-understood into a surprising puzzle. 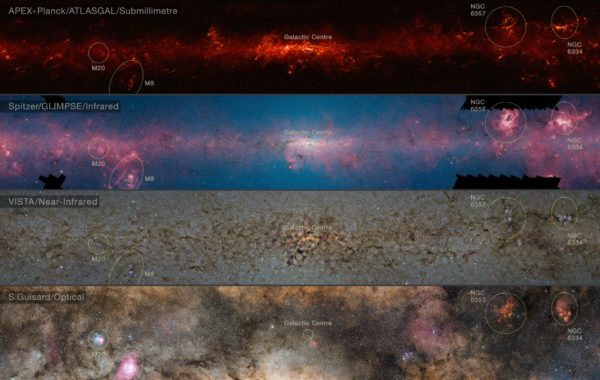 What's the deal on this latest discovery? Find out over on Forbes!

Elements Of Life Discovered Everywhere In The Milky Way (Synopsis)

"Far out in the uncharted backwaters of the unfashionable end of the western spiral arm of the Galaxy lies a small unregarded yellow sun. Orbiting this at a distance of roughly ninety-two million miles is an utterly insignificant little blue green planet whose ape-descended life forms are so…

"True realism consists in revealing the surprising things which habit keeps covered and prevents us from seeing." -Jean Cocteau Each time you look at a photograph of the Universe, you aren't just seeing it as it was at a particular moment in time, but also in a particular wavelength (or set of…

"Modern man must descend the spiral of his own absurdity to the lowest point; only then can he look beyond it." -Vaclav Havel But the spiral is more than a metaphor or a mathematical shape, it's also the most common feature observed in the galaxies out there in the Universe. There are 27 spiral…

Amazing the how distance becomes parsec and the recycle continues. Our life is a random gift of nature.

What do you smoke in that pipe, philip?

“Why this is the case is still a mystery, but better understanding the physics of the galactic center is one of astronomy’s primary science goals for the 21st century!”

The latter could be referred to as dark physics.

It could, if you didn't care that what you said had no meaning whatsoever.

There is no ignorance like the ignorance that says if science cannot yet explain something science has failed. That type of ignorance is demonstrated daily by sn.

Could this be a result of a a galaxy merger in the distant past?