What is the biggest black hole as seen from Earth? (Synopsis)

“Never look down to test the ground before taking your next step; only he who keeps his eye fixed on the far horizon will find the right road.” -Dag Hammarskjold

A black hole is a region of space that’s got so much mass in such a small volume that the escape velocity within a specific region is greater than the speed of light. We call this barrier from which light cannot escape the event horizon, and the sole arbiter of an event horizon’s size is the black hole’s mass. Since they come in a variety of sizes and a variety of distances from us, there’s a wide range of the apparent size of the event horizon as viewed from any location. 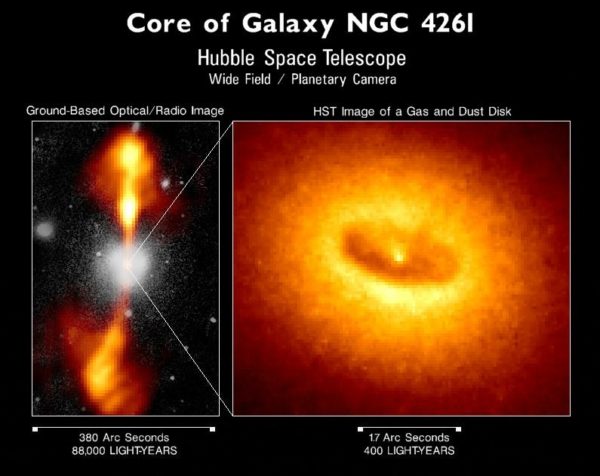 The core of galaxy NGC 4261, like the core of a great many galaxies, show signs of a supermassive black hole in both infrared and X-ray observations. Image credit: NASA / Hubble and ESA.

If you looked from Earth at the various black holes in space, which one would appear the biggest? Would it be the most massive ones, farther away, but large enough that their sizes dominate? Or would it be the closest ones, perhaps under 100 light years away, whose proximity to us makes all the difference? The answer is right in the middle: our galaxy’s supermassive black hole is the biggest, and we might be on the verge of imaging it directly!

The expected view of the Milky Way's supermassive black hole through the Event Horizon Telescope. It should be the only one directly visible. Image credit: S. Doeleman et al., via http://www.eventhorizontelescope.org/docs/Doeleman_event_horizon_CGT_CF….

Come find out the story of how on today’s Mostly Mute Monday!

How close would a stellar mass BH have to be to appear larger? I'm guessing it would need to be very close indeed, like within a few light years. The odds of an inactive BH being that close are pretty small, even though the galaxy likely contains millions of them.

@Omega Centauri #1: This is an easy calculation to do! For a simple Schwarzchild black hole (not spinning), the apparent diameter of the event horizon is 5.9 km * M/Msun.

The central SMBH of the Milky Way is 19 μas in size according to Ethan's article. Stellar-mass black holes are actually quite small as far as astronomical bodies go as one might expect. The black hole in, say, Cygnus X-1 has a Schwarzchild radius of only 26 km. For it to cover 19 μas of the sky (9.2e-11 radians), using simple trigonometry we see that it would need to be 26 km * cot(4.6e-11 radians) = 570 billion km away, about 3800 AU, or 0.06 light year. That's rather close as far as they go.

@Anonymous #3 and @Ethan: You're right that Ethan states, in his conclusions, that Sgr A* has an angular size of 19 uas. But that's wrong, I think: Doeleman (2008) published a size of 37 uas, which is still the best value (EHT isn't online yet). I suspect the difference is as simple as radius vs. diameter.

My name in Marc Porras, and I am a student at Liberal Arts and Science Academy High school as a freshman. I've noticed that you are an expert on theoretical astrophysics from your blog bio. In my graphic design class, I have an assignment to conduct interviews about astronomy for my soon-to-be published magazine, and my topic is black holes. I would like to interview sometime this week before the weekend. My questions would consist of theoretical and interesting facts about black holes, such as the event horizon, firewall theory, hawking radiation and other things.

If you are not able to do the interview over the phone, an email interview would be sufficient. Please get back to me and tell me if you are interested as soon as possible as I do have a deadline.