Ten ways 'Proxima b' is different from Earth

"I have lost tolerance for things without meaning. There is no time for them. Does that make sense?" -Sara Seager

The discovery of a potentially habitable planet around the nearest star to our own -- Proxima Centauri -- has brought up the tantalizing possibility that this might be closest Earth-like world ever found. But it’s important to realize that as much as we’d love to find a world humans could inhabit and colonize beyond our Solar System, there’s a big difference between calling something “Earth-like” and having it actually be like Earth. 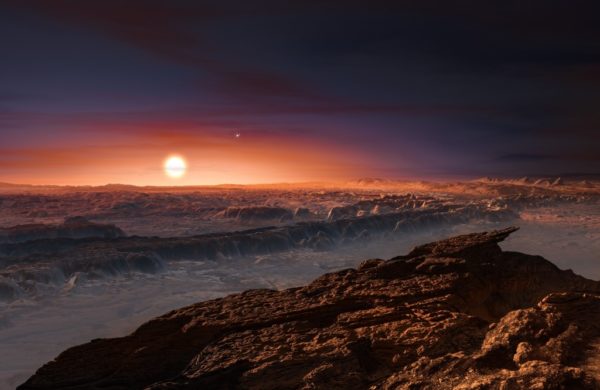 An artist’s rendition of Proxima Centauri as seen from the “ring” portion of the world, Proxima b. Winds would appear to originate from the direction of the Sun, always, which would never rise or set. Alpha Centauri A and B (shown) would be visible during the day. Image credit: ESO/M. Kornmesser.

While Proxima b and Earth have many things in common, mass, size, flux received from their star, etc., they also have many striking differences. Some of these would be noticeable at day, others at night, and others still would make a habitable world as we recognize it extraordinarily unlikely, or at least very different from the the one we know. 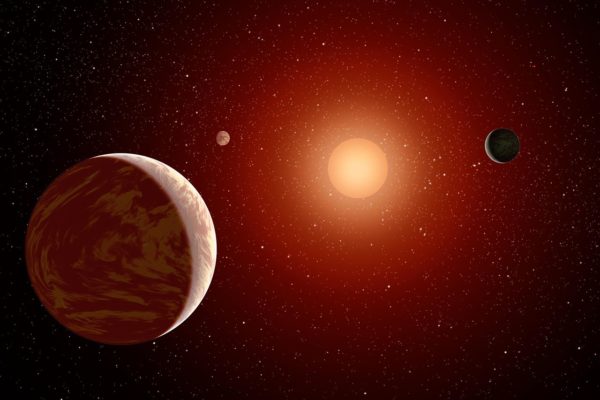 All inner planets in a red dwarf system will be tidally locked, with one side always facing the star and one always facing away, with a “ring” of Earth-like habitability between the night and day sides. Image credit: NASA/JPL-Caltech.

Come learn ten of the ways Proxima b is different than Earth, and see how many you already knew!

#9 is a bit of a stretch, but other than that, interesting.

For 9, the problem is you're thinking about the sun as the only light source influencing evolution, when in fact it isn't.
(1) Anything evolving eyes and living on/near the night-side would likely evolve to use the photons given off by other stars
(2) On earth, a bunch of life-forms have evolved their own sources of light, and in tandem/response evolved the complex receptors tuned to observe those sources.

The first graphic says something about "winds".

What are the chances of a tidally-locked planet, that is right up close to a dim dwarf, having any kind of atmosphere?

A planet with helium would have a gaseous atmosphere down to 3K, the lowest temperature possible to get in nature.

We don't have any because the temperature at our orbit is too high to have helium move at much less than the escape velocity of our planet.

If Proxima b's year is 11 days long, would not its rotational period also be 11 days if it's tidally locked? In your #4 you point out that the lack of rotation would make a magnetic field improbable, but the planet does in fact rotate, just more slowly than earth. That would make the magnetic field weaker, but would it not still be possible for Proxima b to have a field?

"We don’t have any because the temperature at our orbit is too high to have helium move at much less than the escape velocity of our planet."

Isn't the whole point of this "earth-like" business that Proxima b could be of a similar temperature to Earth?

I guess Venus is a good example - no magnetic field of its own but a thick atmosphere that has defied solar activity for...some time so far?

I'd like to see Proxima b modelled to see how long it has been stable in its current configuration...

CO2 is heavy, Craig. It has a low speed at the temperatures Venus is at and that speed is a lot lower than the escape velocity, close to that of the earth.

We retain CO2 for the same reason.

Venus is scorching hot.
Mars is cold and most of its CO2 has been blown off it.

I think that #6 is incorrect for wind direction on the ground.
Cold air would travel towards the sun on ground level, to heat up and rise at the hot side.

Also most, if not all of the water would freeze out on the cold side. This might even result in a slow rotation relative to the sun, triggered by unbalanced mass.

Today .. wanted to send a message to the world; I did not know how to do it; I did not want it to be a global media event; nor had methods to transform a news mediatic what was going to announce to because it would be subject to certain scientific institutions attacks, so I left a comment to a German newspaper "Die Zeit" a very famous newspaper in Germany and which have a profile for comments news and little news; one of the news that wanted to comment was on Mars "and how had that anxiety to say that someone or the world and found a topic related to Mars or by coincidence, I can say it here or post, which I find important now and then to say think it is true or not or science fiction is considering whoever wants "; then and then and a lot to talk about Mars, and see many pictures and analyze with some skill, too much or too detail; the conclusion though shocking that I got was ";
There have been life on Mars, "this was good news
the other was "
Mars was swept by a nuclear event "
what's left of Mars and this happened, I do not need to date a lot of time, millennia to .. [find out if this is actually a ... may remember me as someone who knew and told you]
is so interesting to see the valleys that Mars once had, and the relics of rocks, .. what's left is not only remnants of nature .. are remains of something that now existed there .. what this contributes to this world .. and I think it's important .. is very valuable; You can change a lot and how this world sees life and all you know about the universe;
and with this may prevent or not; one about nuclear event also take place in the same world;
A Russian scientist, doctor of geology and mineralogy Alexander Portnov said that there was once life on Mars.

"On Mars existed life similar to Earth that disappeared long ago and that there are multiple tests. This includes the red color of the surface, which was due to an atmosphere rich in oxygen, as well as the existence of massive sedimentary rocks that prove the former existence of oceans on Mars, "said Portnov
And I am no doctor in mineralogy, but you can see that Mars .. ever was a planet with oceans and lakes and land

Sorry, skipped the wall-o-text there.

Give people a reason to read FIRST, and "I want people to read my words" doesn't work.

"Isn’t the whole point of this “earth-like” business that Proxima b could be of a similar temperature to Earth?"

But if it's much heavier, then the escape velocity is higher. And the temperature isn't all that earth like, from current observation.