How do photons experience time? (Synopsis)

“Everyone has his dream; I would like to live till dawn, but I know I have less than three hours left. It will be night, but no matter. Dying is simple. It does not take daylight. So be it: I will die by starlight.” –Victor Hugo

Whether you’re at rest or in motion, you can be confident that — from your point of view — the laws of physics will behave exactly the same no matter how quickly you’re moving. You can move slowly, quickly or not at all, up to the limits that the Universe imposes on you: the speed of light. 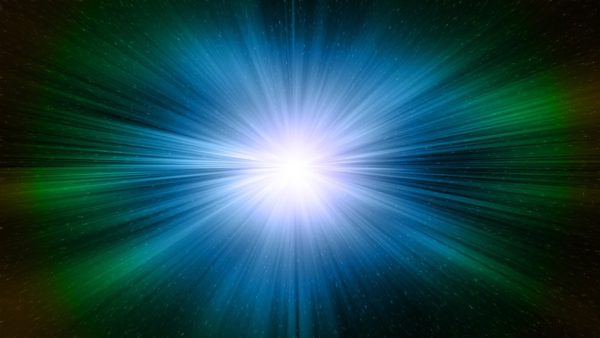 Light, in a vacuum, always appears to move at the same speed -- the speed of light -- regardless of the observer's velocity. Image credit: pixabay user Melmak.

But what if you’re actually a photon? What if you don’t move near the speed of light, but at the speed of light? As it turns out, the way any massless particle experiences time, distance, and the Universe in general is entirely counterintuitive, and there’s nothing in our common experience that matches up.

A relativistic journey toward the constellation of Orion. Image credit: Alexis Brandeker, via http://math.ucr.edu/home/baez/physics/Relativity/SR/Spaceship/spaceship…. StarStrider, a relativistic 3D planetarium program by FMJ-Software, was used to produce the Orion illustrations.

It's a relatively interesting story if you want to think about it deeply, and yet once you arrive at the answer, it couldn't be any simpler.

“Everyone has his dream; I would like to live till dawn, but I know I have less than three hours left. It will be night, but no matter. Dying is simple. It does not take daylight. So be it: I will die by starlight.” -Victor Hugo Whether you're at rest or in motion, you can be confident that -- from…

“There is no such thing as magic, supernatural, miracle; only something that's still beyond logic of the observer.” -Toba Beta It might be hard to believe, but science tells us truths about the Universe that we might never have intuited or philosophized about if the Universe itself didn't reveal…

Ask Ethan: Can Gravitational Waves Let Us Peek Inside A Black Hole? (Synopsis)

"Find a place inside where there's joy, and the joy will burn out the pain." -Joseph Campbell One of the cardinal rules of a black hole is that anything that falls inside the event horizon -- that crosses that invisible boundary -- can never escape. That's because the escape velocity from inside…

The Fun of Going Faster-Than-Light

Perhaps I'm just not intelligent enough to understand this, but I think the grammar makes the following paragraph very difficult to read and understand:

"Quite clearly, it takes longer for the bounces to occur if the speed of light is always a constant. If time ran at the same rate for everyone, everywhere and under all conditions, then we’d see the speed of light be arbitrarily fast the faster something moved. And what’s even worse, is if something moved very quickly and then turned on a flashlight in the opposite direction, we’d see that light barely move at all: it’d be almost at rest."

There seem to be some anclear antecedents that make the sentences confusing. I'm not quite understanding the message here.

On a separate note, at the end you state, "Given everything that we know, a photon never ages in any way at all." I thought photons got redshifted (or blueshifted) as they moved through space - is that not some kind of aging? At the very least it's a noticeable effect in response to its passage through space, which in my mind would seem to counter the assertion that time doesn't pass for the photon and that it's journey is instantaneous.

Again, I may just not be understanding things properly, and if so, I apologize for questioning the writing.

Unfortunately your comment contains nothing about what it is you find confusing.

A light clock that "ticks" based on the reflection of a photon will, from a viewer moving past the clock, have to travel further in space to tick, therefore it would tick slower than someone stationary with the clock would claim. And if you ran away from me and shone a light back, you would consider that normal euclidian and newtonian mechanisms make the speed of light I received slower. What I would infer is that the light waves are spread over a longer distance, NOT that it takes longer to traverse, and therefore the light is red shifted, rather than slowed down.

But all I've done is restate the quote you made, since you did not pick out the source of your confusion, you merely related the entire block, leaving finding the source up to our guesswork.

"I thought photons got redshifted (or blueshifted) as they moved through space – is that not some kind of aging?"

Your car does not get older of you spray paint it red, not does it get younger if you paint it blue. Why would photons change the word "aging" to "recoloured"?

The same way most things without consciousness do.

Yet despite this incredible journey, the photon itself experiences none of what we know as time: it simply is emitted and then instantaneously is absorbed, experiencing the entirety of its travels through space in literally no time.

If t for the photon was zero for the entire journey, there would be no oscillation. But there is oscillation, given by the t of the observer. So the photon must be, in some respect, experiencing time.

I wondered about that same issue for a while.. and still do.

On one hand, you said yourself... that formula for electric and magnetic field oscilation is given for the reference frame of the observer, not the reference frame of the photon. On the other hand, the length contraction in SR is given on the axis of the propagation, not all axis'. In other words.. the photon doesn't have any length to travel, because it's zero, but it's perpendicular axis is unaffected.

Overall, would like to see this "paradox" explained in greater detail :)

"If t for the photon was zero for the entire journey, there would be no oscillation. "

A mass moving at velocity v over time t1 to t2 is acceptable, right? But what when t doesn't change? If you hold time still, there's no movement, therefore no velocity, right?

Your problem is the same as the early thinkers had when trying to work our what time was.

The only difference is one talks of "velocity" and the other "oscillation". If you knew that they were totally different, you would be able to work your problem out and prove that there's an issue.

But a change of words makes it less clear and quite easy to miss if you're starting off with "Isn't this a problem?" rather than "What's my problem understanding this?".

The former can be quite a clear way to get someone to EXPLAIN the second. Active voice is faster and simpler than passive.

how old is the world