Why does gravity move at the speed of light? (Synopsis)

"The fact that gravitational damping is measured at all is a strong indication that the propagation speed of gravity is not infinite.  If the calculational framework of general relativity is accepted, the damping can be used to calculate the speed, and the actual measurement confirms that the speed of gravity is equal to the speed of light to within 1%." -Steve Carlip

According to General Relativity, the speed of gravity must be equal to the speed of light. Since gravitational radiation is massless, it therefore must propagate at c, or the speed of light in a vacuum. But given that the Earth orbits the Sun, if it were attracted to the Sun's position some 8 minutes ago instead of its present position, the planetary orbits would disagree with what we observe! 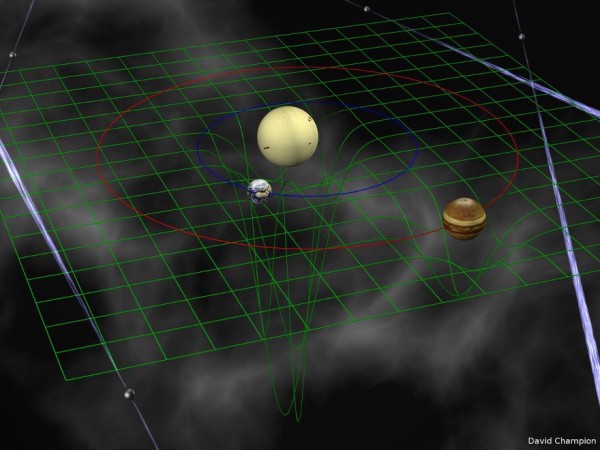 What, then, is the resolution to this? It turns out that in relativity itself, what we experience as gravitation is also dependent on both speed and changes in the gravitational field, both of which play a role. From observations of binary pulsars, a gravitationally lensed quasar and, most recently, direct gravitational waves themselves, we can constrain the speed of gravity to be very close to the speed of light, with remarkable precision.

Come get the full story, only over on Forbes!

Whew!
Must have been a slow news day in science.

Makes me think of that quote…
“… Now, however, science and especially science bureaucracy is a career, and one amenable to social climbing. Careers attract careerists, in Feyerabend’s words: “devoid of ideas, full of fear, intent on producing some paltry result so that they can add to the flood of inane papers that now constitutes ‘scientific progress’ in many areas.”

Aaaah, the joys of learning stuff.
:)

Very interesting.
Thank you for such a good article.

Thanks Ethan for this in depth article. I ... I.. have to process it because ... Just because..

Lol, gravity is instant, really all of modern so-called science is a bunch of lies. Primary light travels instantly - we see the universe in real-time. Gravity is a push, not a pull, black holes do not exist, there was no big bang. Just sayin'

Veri Tay, the only thing you said that is true, given our current state of understanding, is the final two word sentence.

The greatest discoveries in science will always be made by those who are made happy only from achieving knowledge, not achieving power/money.