New supernova results: is the Universe not accelerating? (Synopsis)

Just a few days ago, a new paper was published in the journal Scientific Reports claiming that the evidence for acceleration from Type Ia supernovae was much flimsier than anyone gave it credit for. Rather than living up to the 5-sigma standard for scientific discovery, the authors claimed that there was only marginal, 3-sigma evidence for any sort of acceleration, despite having statistics that were ten times better than the original 1998 announcement. 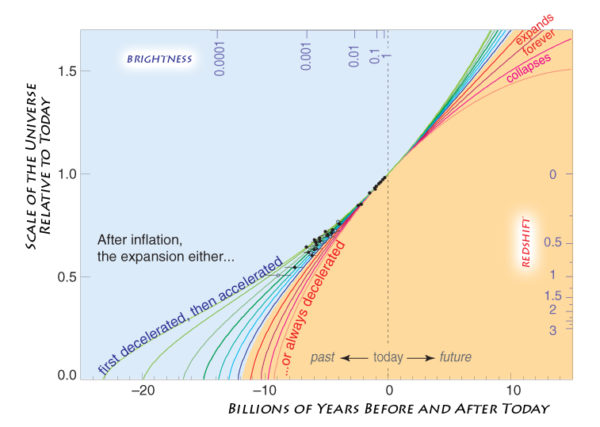 Measuring back in time and distance (to the left of "today") can inform how the Universe will evolve and accelerate/decelerate far into the future. Image credit: Saul Perlmutter of Berkeley, via http://newscenter.lbl.gov/2009/10/27/evolving-dark-energy/.

They claimed that an improved likelihood analysis combined with a rejection of all other priors explains why they obtained this result, and use it to cast doubt on not only the concordance model of cosmology, but on the awarding of the 2011 Nobel Prize for dark energy. Despite the sensational coverage this has gotten in the press, the team does quite a few things that are a tremendous disservice to the good science that has been done, and even a simplistic analysis clearly debunks their contentions. 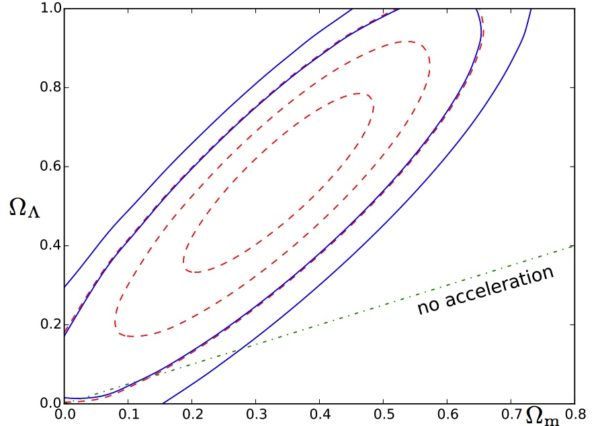 The figure representing the confidence in accelerated expansion and in the measurement of dark energy (y-axis) and matter (x-axis) from supernovae alone. Image credit: Nielsen, Guffanti and Sarkar, 2016, from the preprint at https://arxiv.org/pdf/1506.01354v3.pdf.

Dark energy and acceleration are real and here to stay. You owe it to yourself to find out why and how!

i like this quote from wiki: "... To a busy journalist hunting for real information a question mark means 'don't bother reading this bit' " :D