Democracy vs. Meritocracy: how science doesn't care about your vote (Synopsis)

"The evidence at present available points strongly to the conclusion that the spirals are individual galaxies, or island universes, comparable with our own galaxy in dimension and in number of component units." -Heber Curtis, 1920

In many different areas of life, we settle disagreements by popular vote. But in science, we know better; regardless of whether people accept the conclusions or not, the Universe simply is the way it is, and it’s up to us to listen to the evidence to uncover scientific truths. It often happens, however, that everyone can agree on the pieces of evidence, yet disagree as far as what those pieces of evidence mean.

One theory was that these spiral nebulae were molecular clouds that collapsed into a disk, began rotating and funneling mass into the center, where they would eventually form stars. Images credit (from L-to-R): NASA and The Hubble Heritage Team (STScI/AURA). Acknowledgment: C. R. O’Dell (Vanderbilt University); ESA: C. Carreau; Bill Schoening, Vanessa Harvey/REU program/NOAO/AURA/NSF.

In 1920, this was exactly the case when it came to the nature of spiral nebulae: were they protostars, or were they galaxies all unto themselves? A great debate took place, where two extremely well-respected astronomers argued some very different interpretations of six pieces of data. While the arguments were interesting and a vote was held, the outcome (the wrong side won) didn’t matter. Three years later, the deciding evidence did. 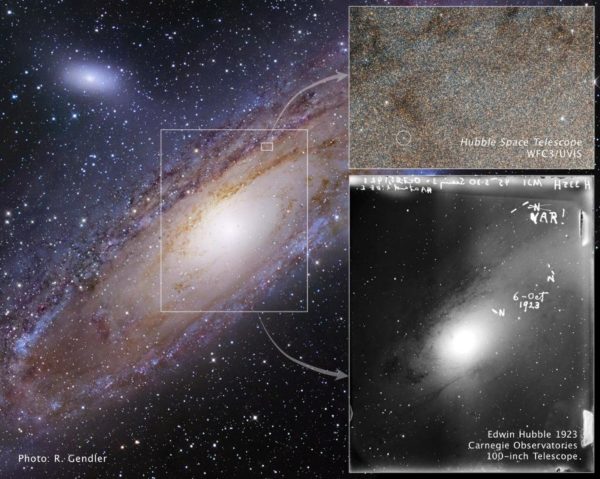 The star in the great Andromeda Nebula that changed our view of the Universe forever, as imaged first by Edwin Hubble in 1923 and then by the Hubble Space Telescope nearly 90 years later. Image credit: NASA, ESA and Z. Levay (STScI) (for the illustration); NASA, ESA and the Hubble Heritage Team (STScI/AURA) (for the image).

Science isn’t decided by public opinion, but by merit, and this perfectly illustrates why. Perhaps, when it comes to the other issues in our lives, we should aspire to exactly the same standards.

No, Ethan,
Much like prostitutes (or economists) scientists flatter themselves and those that pay them. You keep pounding the self delusional drum of 'noble science' pristine and above the political fray, when you know it's bullshit. Scientists are just people with many objectives and agendas that quite frequently are in conflict with their own presumed objectivity, questionable ethics, vacant morality, and are often more concerned with getting published than doing work that is actually reproducible.

In simple fact, the equation 'SCIENCE = LOTS OF $$$' perfectly illustrates why science often IS a tool of politicians who bow to public opinion. Perhaps when it comes to other issues in our lives, we should not aspire to be so naïve as to hand yet another tool to politicians to hurt people with.

.
Max Planck was far more honest and to the point than Ethan - “Science advances one funeral at a time.”

Much like prostitutes (or economists) scientists flatter themselves and those that pay them.

Could you provide some more data here? I mean, the sex trade seems like pretty hard, unglamorous labor, and James Heckman seems to be a pretty humble guy with a serious interest in outcomes of modeling.

It's not anybody else's fault if you can't afford high-end hookers.

^ Thinking back, I should qualify: I've also heard that Heckman is a hard-nosed boss, but I don't think the descriptions are mutually exclusive.

Doesn't prove your claim. Heck, it isn't even very true, though most cutting edge science is well beyond any homebuilt contraption to investigate, theoretical sciences can be very cheap indeed, and the proponents could get massively more $$$ in banking or the stock market than in science.

But funnily enough, nobody whines about how the stock market, big business or banking are corrupted with politics. Somehow the things that make you money are fine and dandy, the things money is spent on is your sole entry on your critique.