"The bedrock nature of space and time and the unification of cosmos and quantum are surely among science's great 'open frontiers.' These are parts of the intellectual map where we're still groping for the truth - where, in the fashion of ancient cartographers, we must still inscribe 'here be dragons.'" -Martin Rees

In 2015, LIGO collected data from a total of three candidate gravitational wave events, all of which were announced and released in 2016. These events verified the great prediction of Einstein: that decaying orbits should emit gravitational radiation with specific magnitudes and frequencies that distort spacetime in a particular, measurable way. 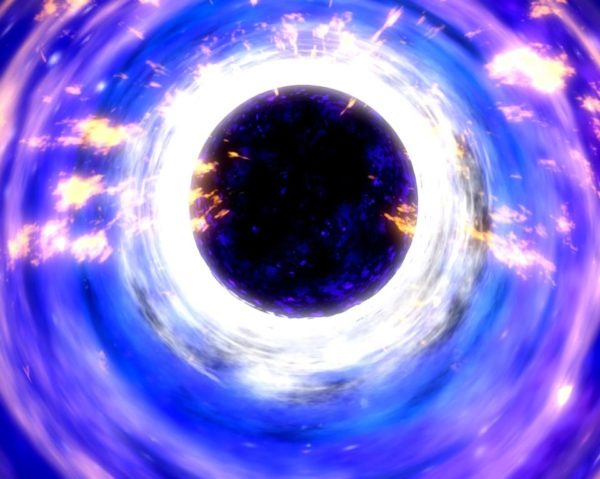 While Einstein's theory makes explicit predictions for a black hole's event horizon and the spacetime just outside, quantum corrections could alter that significantly. Image credit: NASA.

But some quantum gravitational ideas modify the event horizon and the space just outside of it, creating the possibility that merging black holes will exhibit "echoes" superimposed atop the Einsteinian signal. For the first time, a team of theorists dove into the LIGO data to test this, and may have just uncovered the first evidence for quantum gravity in our Universe. 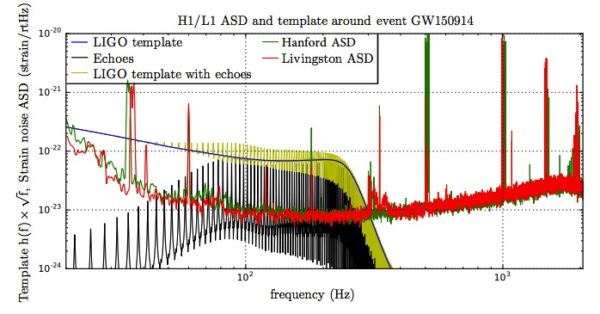 The LIGO signal (blue line) for gravitational waves emitted by the first-ever detected merger may have quantum corrections (black), which could alter the total signal (yellow) that shows up in the detector. Image credit: Abedi, Dykaar and Afshordi, 2016, via https://arxiv.org/abs/1612.00266.

With the next run of LIGO already underway, be prepared to find out that gravity may be inherently quantum after all!

If the echo signal were to be proved, would that mean Einstein's Field Equation is wrong?

Denier,
That depends on your precise definition of 'wrong', but most physicists would say 'no'. Einstein's Field Equation, like the rest of General Relativity (GR), has passed every test that has ever been thrown at it so far. Nothing is going to change the fact that it explains all of those previous results. If some special case is ever found for which GR does not give exactly the correct answer, then it would be more proper to say that GR is "incomplete", not that it is "wrong". It would be incomplete in the sense that it does not describe all possible events with 100 % accuracy. But keep in mind, even if this echo signal is real, the greatest part of the black hole merger signal is still correctly predicted by GR.
If and when someone does find an extreme condition that is better described by something other than GR, that other theory will have to give the same results that GR gives for all of the other tests that GR has already passed. To say at that point that GR is 'wrong' in general would be highly misleading. The most one could say would be that either GR is 'incomplete', or that it gets the details of a particular situation 'wrong'.

To paraphrase Isaac Asimov: When Newton formulated his theory of universal gravitation, he was wrong. When Einstein formulated the field equations of general relativity, he was wrong. But if you think that Newton’s theory of universal gravitation is just as wrong as Einstein’s general relativity, then your view is wronger than the both of them put together.

The notions of “right” and “wrong” are generally much more fuzzy in science. If you want absolute truth, go to the mathematics department (but beware Gödel’s theorem), but in the sciences where they deal with actual reality, be prepared to deal with incomplete theories.

Even Einstein knew that General Relativity was “wrong”, which is why he spent the last years of his life trying to develop a Unified Field Theory. The fact that general relativity predicts singularities was an early sign of its wrongness. The fact that it has so far proved resistant to proper quantum-mechanical formulation is another. But it was right enough for an even larger domain than Newton’s gravitation.

"...cosmic inflation, the ultra-high-energy state of spacetime prior to the Big Bang."

I thought that inflation occurred after the Big Bang.