"We have chased away the clouds, the sky is all 'rose.'" -Francois Hollande

When you have a light curve with two different large, periodic dips in it, a binary star system is the likeliest explanation. The stars eclipse, and in the case where they're so close their envelopes touch, they're known as contact binaries. That, alone, is enough to make a system spectacular.

Contact binaries come in all sorts of different masses and sizes, but cannot be directly observed or resolved by current telescopes. Image credit: ESO/L. Calçada.

But in the case of this system, KIC 9832227, the orbital period is speeding up, meaning they're destined to merge. When they do, we can expect to see a luminous red nova, but we might -- if we're lucky -- also uncover the explanation for one of Hubble's most amazing pictures and hitherto unsolved mysteries: the mysterious light curve and echoes of the cosmic rose, V838 Monocerotis. 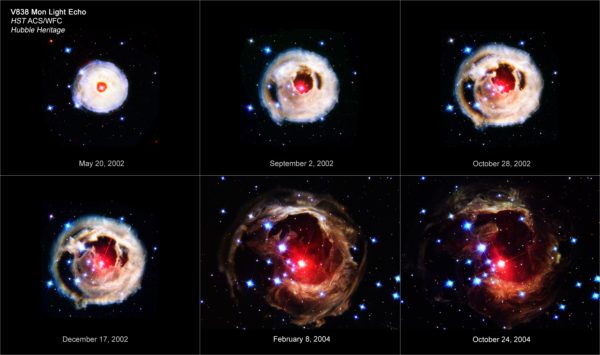 Come get the full story and see what all the fuss is really about on Starts With A Bang today!

How well have stellar mergers been simulated? And if so there must be a rough timespan for the various phases of the event, something like initial nova-like flash, then there must be a period where the star contains two cores, which eventually merge, then after a while it should settle down into a higher mass star. How long are these steps, hours, days, years, millenia?

The last picture in the post (the light echo)... wow... amazing. So much detail is visible!