"Bethany: Is your house on fire, Clark?
Clark: No, Aunt Bethany, those are the Christmas lights." -National Lampoon's Christmas Vacation

Ahh, Christmas. It's easy to forget how much the invention of the light bulb in 1879 reduced the number of tree fires in people's homes. It was a mere three years later that people began decorating Christmas trees with strings of lights instead of candle flames, and as you can imagine, the reduction in open flames atop fresh kindling had its benefits, and caught on like wildfire. Trees now routinely sport previously unfathomable numbers of lights, limited only by your imagination and your (optional) good taste. 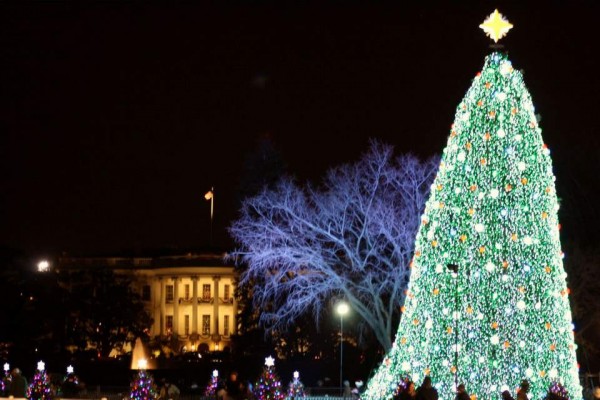 But what about putting a star atop one of these trees?

I don't mean one of those pretend, cheap, Earth-built stars; I mean the real deal. You know, a star: a massive, luminous sphere of plasma held together by its own gravity and held up by a fantastic amount of outward radiation pressure! 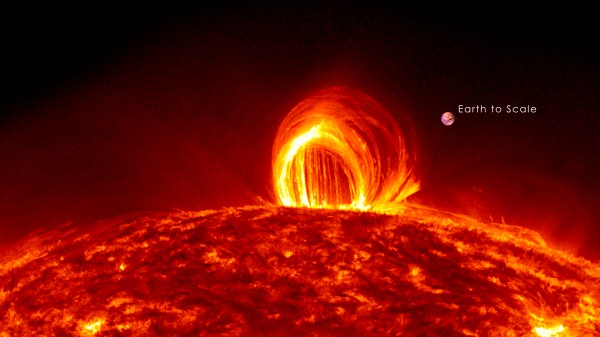 And if you decide to put one of those on top of a tree... well... if something like this happens, it's your own fault! 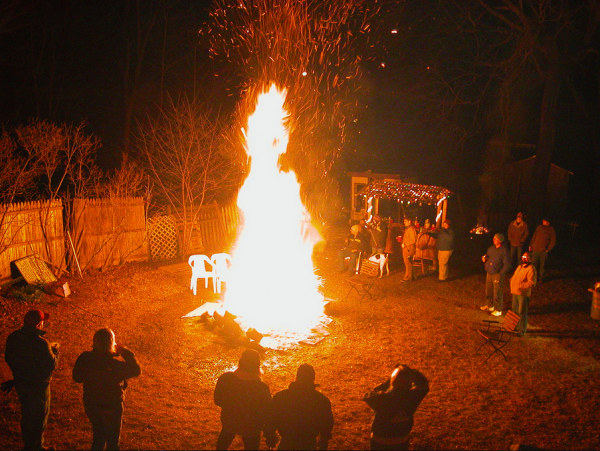 But there is at least one place in our galaxy where it's not only safe but also beautiful to place a star atop your Christmas tree, and -- with the right equipment -- you can see it for yourself this holiday season. Shortly after sunset tonight and all through the majority of the coming winter nights, you can find the great winter constellation Orion. If you draw an imaginary line from the "highest" stars of the hunter -- Bellatrix to Betelgeuse and well beyond -- you'll eventually come to the prominent star Gomeisa, just a little north of the brilliant Procyon. 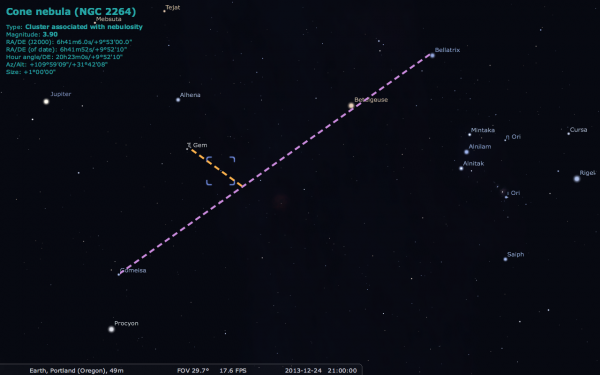 Well, if you go to the place that's halfway between Gomeisa and Betelgeuse, you can move from that location towards ξ Geminorum, another prominent naked-eye star. And midway on your journey there, you can find the much less prominent (but still naked-eye) star S Monocerotis, a very (intrinsically) bright-and-blue star. If you view it through a telescope or very good binoculars, you should be able to find a spectacular sight for the holiday season: the Christmas Tree cluster! 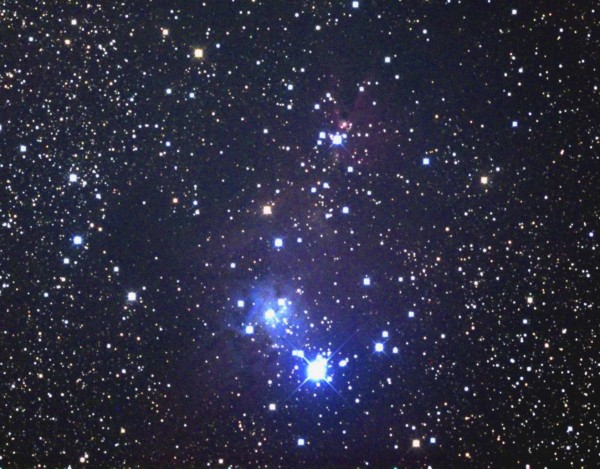 Also known as NGC 2264, this collection of bright blue stars lies some 2,600 light-years away, and the very bright, blue star at the base is the aforementioned S Monocerotis, which is actually a supergiant variable star system some 8,000 times as luminous as the Sun! A rare O-class star -- the brightest and hottest of all stellar classes -- this will someday go supernova, likely outshining all other stars and planets in the night sky when it does.

It's also the base of the Christmas Tree, which has a beautiful blue star (HD 47887) and a little something extra as a tree-topper. 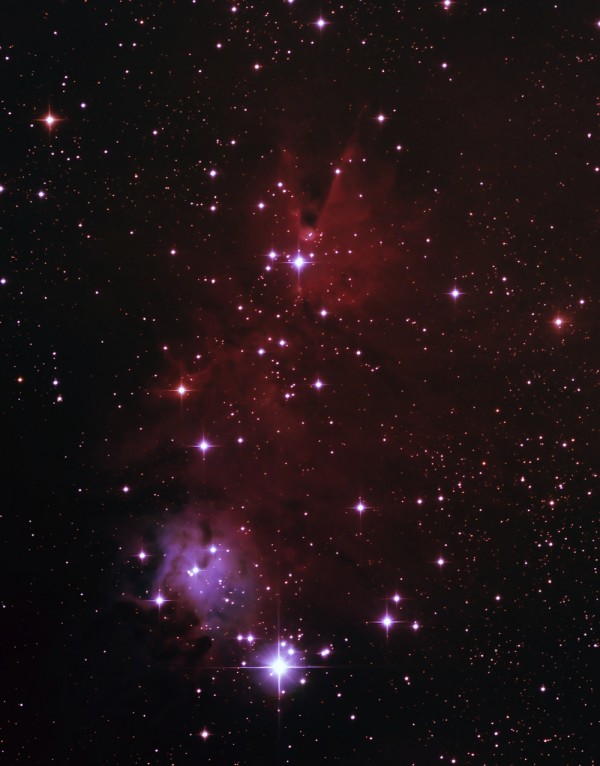 The cluster is a collection of around 600 bright, new stars, and it's full of nebulosity in the form of neutral-and-ionized hydrogen, which gives it its characteristic combined blue-and-red hues. The ionized hydrogen, when it recombines to form neutral atoms, emits a characteristic red line at 656.3 nanometers, which explains the faint red hue. There's also some neutral dust that reflects the bright blue starlight of S Monocerotis, which is where the blue color comes from!

But you'll notice something unique at the top of the proverbial tree topper, and it's the other famous part about NGC 2264: the Cone Nebula! 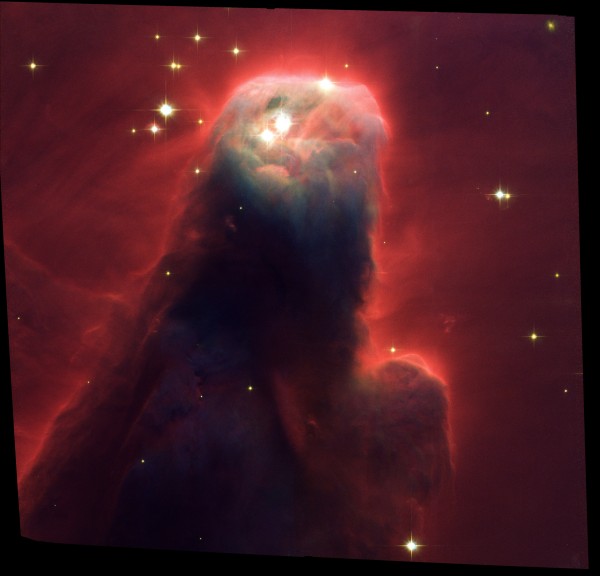 This nebula is actually a molecular gas cloud giving rise to newly forming stars, in the process of being evaporated from the intense stellar heat both coming from the interior -- due to the protostars inside it -- as well as from the ultraviolet radiation coming from the surrounding young, hot stars!

There's also a much larger molecular cloud complex at work here, which observations that specifically look for the ionized hydrogen signature can really bring out spectacularly. 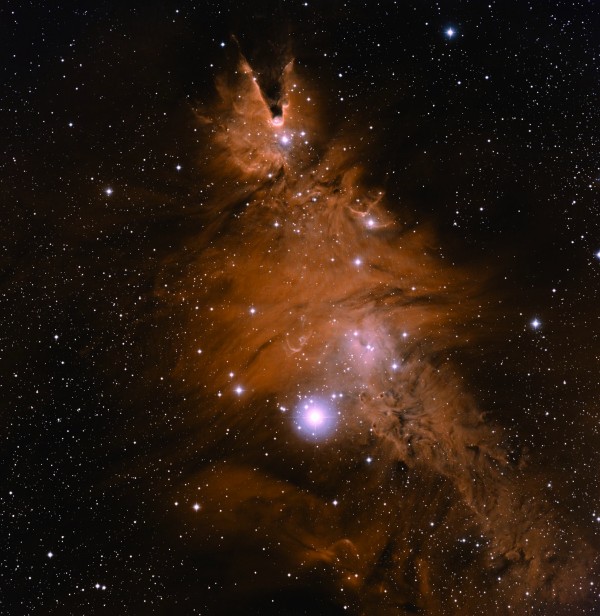 If you're having difficulty seeing the tree shape, I've taken the liberty of outlining it for you below using the ESO image featured at the beginning, below. (And if you really want an insanely large version, give this link a shot!) 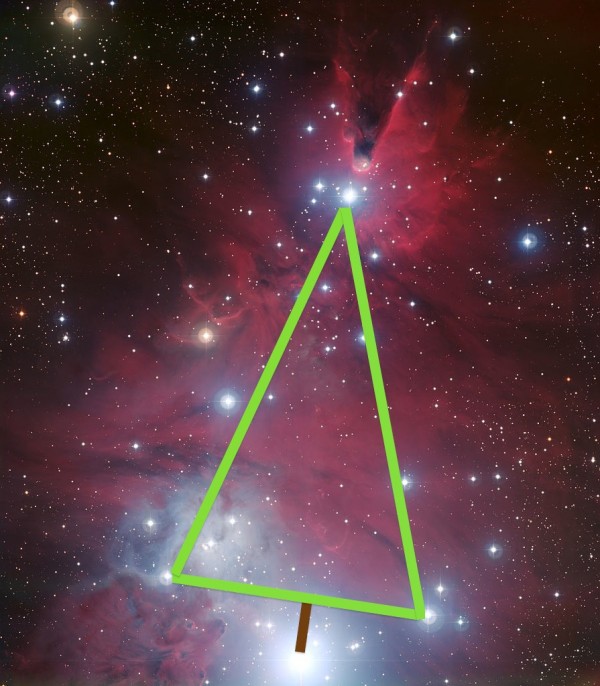 The most unique view you're likely to see, however, is one that your eyes will never pick up, and that's of what's present in the infrared! At wavelengths longer than the human eye can see, we find warm-and-cold dust, some of which is present in tendrils a mere hundred thousand years old! 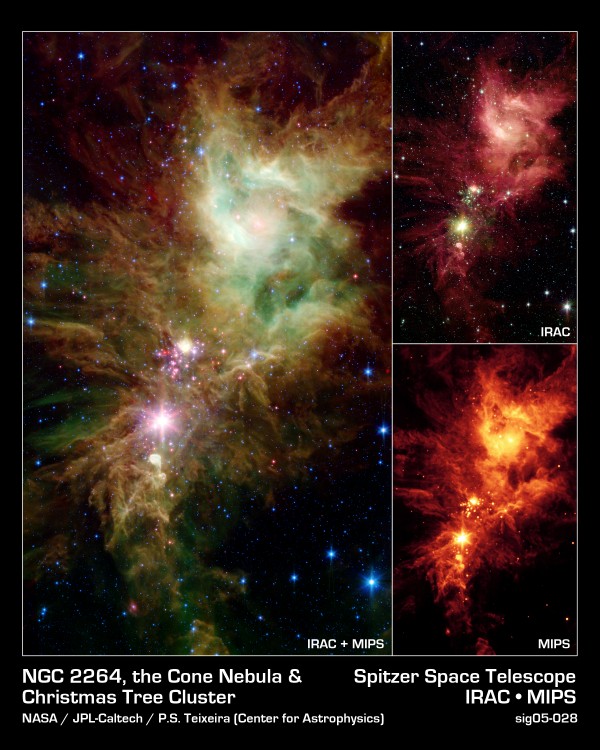 Can you find the tree-topper star and the Cone Nebula in there?

I've sifted through the image and pulled it out for you, and even though it's a glorious sight, the most surprising thing in there is not to be found in the nebula itself, but in the sheer number of stars and protostars actually present in this object, which clearly extends well into the thousands from views of this small region alone! 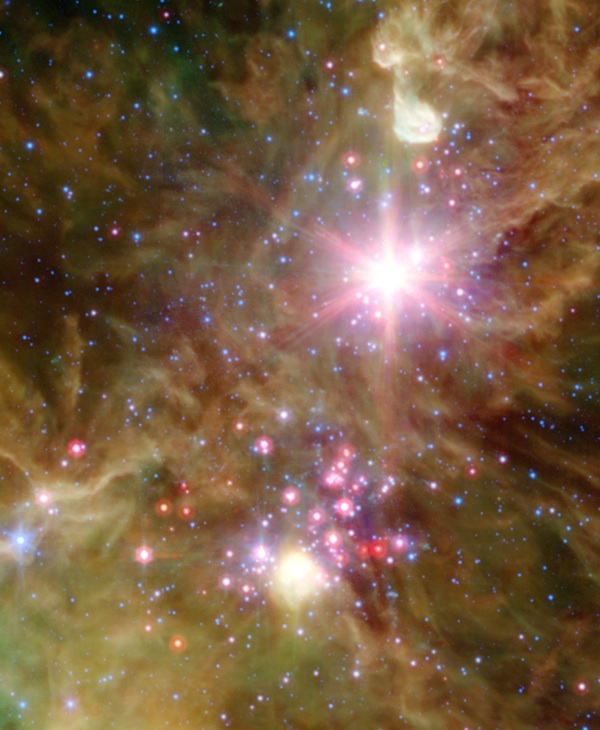 So this Christmas, don't be afraid of putting an Earth-based star atop your tree, but if you've got aspirations for a real star atop one, do us all a favor and stick to the one atop the Christmas Tree cluster! Happy holidays, all, and I'll see you back here after Christmas!

Happy holidays Ethan, all the best!

Thanks for an excellent year of gems, Ethan.
Seasons greetings to all.