World's largest telescope will revolutionize the future of astronomy (Synopsis)

"For my confirmation, I didn't get a watch and my first pair of long pants, like most Lutheran boys. I got a telescope. My mother thought it would make the best gift." -Wernher von Braun

Sure, going to space is great for overcoming Earth’s atmosphere, but it’s no substitute for the sheer size of what we can build on the ground. The current record-holder for largest telescope is 10.4 meters in diameter, and that takes 36 hexagonal segments to get there. But single mirrors can be cast up to about 8 meters in diameter. Thanks to a revolutionary design, the Giant Magellan Telescope will stitch 7 of them together into a single, 25 meter telescope. 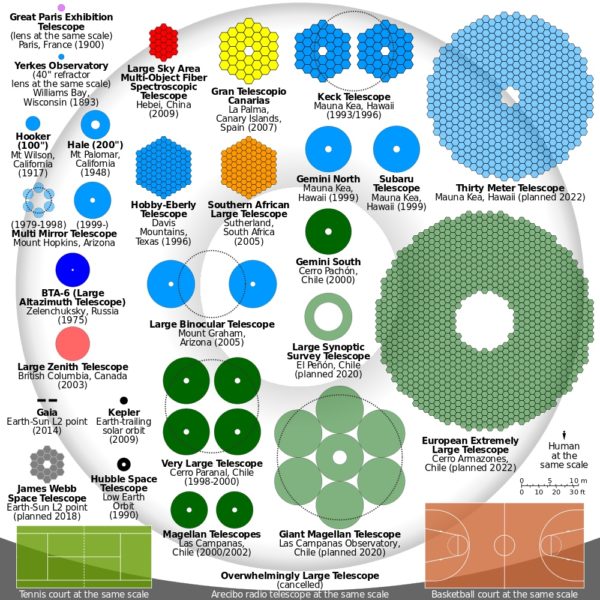 A comparison of the mirror sizes of various existing and proposed telescopes. When GMT comes online, it will be the world's largest, and will be the first 25 meter+ class optical telescope in history. Image credit: Wikimedia Commons user Cmglee, under c.c.a.-s.a.-3.0.

It will have 100 times the light-gathering power of Hubble, and will be able to take a number of unprecedented observations. It will measure rotation curves of galaxies up to 10 billion light years away. It will take direct images of nearby exoplanets, both Earth-like ones such as Proxima b and Jupiter-like ones that haven’t been discovered yet. It will measure galactic outflows, molecular clouds and so much more. But the greatest discoveries that await will surely be the ones we can’t anticipate.

The occultation of Jupiter's moon, Io, with its erupting volcanoes Loki and Pele, as occulted by Europa, which is invisible in this infrared image. GMT will provide significantly enhanced resolution and imaging. Image credit: LBTO.

Find out why all of this is so exciting, and how GMT will revolutionize astronomy!

Sometimes, Size is Everything!

"I went into a clothing store, and the lady asked me what size I was. I said, 'Actual'. I'm not to scale." -Demitri Martin When you look out at the Universe, what you can see is limited, at the most fundamental level, by the size of what you look with. This is why you can see dimmer objects at…

“For my confirmation, I didn’t get a watch and my first pair of long pants, like most Lutheran boys. I got a telescope. My mother thought it would make the best gift.” -Wernher von Braun A telescope is only as good, mind you, as the amount of time you spend looking through it. And for most people,…

"There are so many people who are arguing or fighting over issues which don't have much relevance. We must all realise it is not worth it. It's like being in the whirlpools which are always present behind a little rock near a river. We seem to be living in these little whirlpools and forget that…

Comments of the Week #146: From zero gravity to our Solar System's end

Ethan,
So how is the resolution, and contrast so needed for separating close objects with a great difference in brightness going to compare with its larger -but many-segmented cousins. Will this instrument have unique capabilities that they won't?

The bigger your primary mirror is:

the more light you gather,
the better your resolution is,
and more details can be seen, more distant and faster than under any other circumstances.

We had a post a few months back about how simulations like MUGS2 and others predict that the rotation curves of very distant and hence younger galaxies ought to show deviation from the SPARC acceleration law discovered by McGaugh et. al. Will this new telescope be able to measure the rotation curves of galaxies far enough away to confirm or refute this prediction of MUGS2 and other galaxy simulations? Might be interesting to find out!

And on the total opposite side of the $$ spectrum you have something like dragonfly telescope. Which as a photo buff I can't help but fall in love with :) for those who haven't heard about it..

Astronomy telescopes were using lenses in the past but now they are using mirrors. Because creating bigger and bigger lenses became hard and expensive. Mirror telescopes still getting larger today thanks to segmented mirror innovation.
But I think ultimate (ground-based) telescope could use both mirror and lens. It is possible to change refraction index of air to turn it into a giant (virtual/air) lens. (Imagine it created right in front of a giant mirror telescope.)
Proof of concept:
http://newatlas.com/laser-weapon-space-shield-bae/47409/
My more detailed blog:
http://fb36blog.blogspot.com/2017/01/virtual-lens-for-astronomy.html