The Strangest Eclipse Fact Of All: The Moon's Shadow Isn't A Circle (Synopsis)

"To morrow, I believe, is to be an eclipse of the sun, and I think it perfectly meet and proper that the sun in the heavens, and the glory of the Republic should both go into obscurity and darkness together." -Benjamin F. Wade

The Moon is spherical, and so its shadow should be a circle by simple geometry, right? Only, if we view it when it strikes Earth, it’s not even close to a circle. It’s stretched into an ellipse, and further complicated by irregular, sharp edges and corners. Why would it appear that way? As it turns out, three factors combine to get us there. 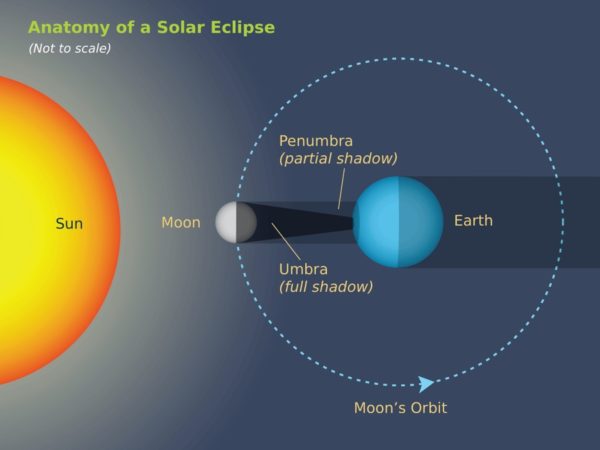 An illustration of the Sun-Moon-Earth configuration setting up a total solar eclipse. The Earth's non-flatness means that the Moon's shadow gets elongated when it's close to the edge of the Earth. Image credit: Starry Night education software.

The first is the fact that Earth is a sphere, not a disk, so any shadow falling on it gets stretched. The second is that the Moon’s sharp peaks, valleys and craters mean that its shadow gets irregularly distorted in a way that changes as its orbit continues. And the third is that Earth isn’t smooth, but exhibits significant changes in elevation and terrain. 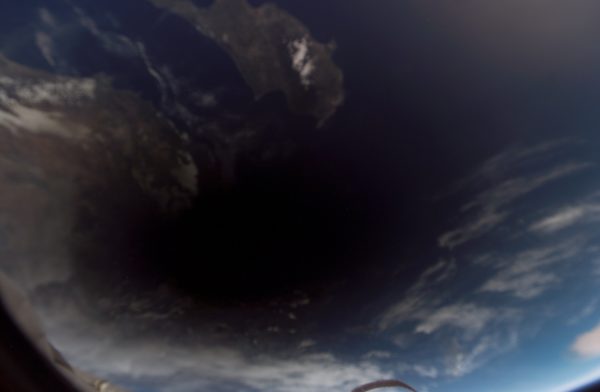 The shadow of the moon falls on Earth as seen from the International Space Station during the March 29, 2005 solar eclipse. Image credit: NASA / ISS / Expedition 12.

Add them all up, and you’ve got the incredibly bizarre and ever-changing shape of the Moon’s shadow. Come see what the eclipse of August 21, 2017 will hold!

"The Moon is spherical, and so its shadow should be a circle by simple geometry, right?"

Only if you're a citizen of flat-land :) In 3d spheres cast elipses on other spheres even in simple geometry :)

.. in other words, IMO don't think it's strange that the shadow is ellipse since everyday experience shows you that.. one ball casting shadow on another ball.. That it's a jagged ellipse is an interesting thing indeed.

Sinisa:
A circular shadow would project as an ellipse on any planer surface that is inclined to the direction of the light. Once you make it a sphere, then its no longer even an ellipse. But, the size of the penumbra versus the earths radius is pretty small, so the ellipse isn't a bad first approximation.

Of course the shadow isn't a cylinder, its actually a cone, but a plane intersecting a cone is a conic section still.

@ Omega
"A circular shadow would project as an ellipse on any planer surface that is inclined to the direction of the light."

true.. I didn't mention that part because if they are all aligned perfectly, you would get a circle. But you are correct, and goes in line with what I wrote #2 .. that IMO in most of our everyday experience... we see way more ellipses then we see perfect circle shadows.

Of course it's a circular shadow!

... if you look at it from the center of the Earth-facing Moon.

A considerable amount of uphill walking and holding your breath will be required, though...