“In our description of nature the purpose is not to disclose the real essence of the phenomena but only to track down, as far as possible, relations between the manifold aspects of our experience.” -Niels Bohr

When it comes to galaxies, clusters of galaxies or the largest-scales on the Universe, dark matter is absolutely required. There’s no way to explain colliding galaxy clusters, correlations between different galaxies, the filamentary structure of the Universe or the fluctuations in the Cosmic Microwave Background without it. But it isn’t just dark matter that hopes to solve these problems, and there’s a new contender in town: emergent gravity. 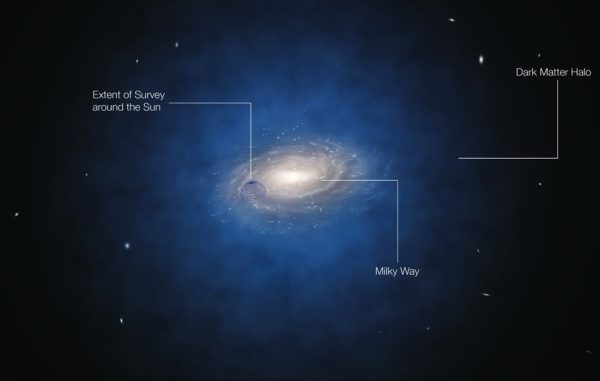 The dark matter halo around galaxies could be explained, in principle, by a new type of entropy that's affected by the normal, baryonic matter present in space. Image credit: ESO / L. Calçada.

20 years ago, Ted Jacobson proposed, after noting similarities between gravitation and thermodynamics, that gravity might be an emergent phenomenon. Erik Verlinde has run with it, producing a formalism to get dark matter and dark energy-like effects out of a Universe where a new kind of entropy exists. Recently, it’s made predictions for galactic rotation curves, and with marginal successes, may be poised to test those larger scales.

The fluctuations in the Cosmic Microwave Background, or the Big Bang's leftover glow, contain a plethora of information about what's encoded in the Universe's history. Image credit: ESA and the Planck Collaboration.

But can emergent gravity really challenge dark matter for explaining the full suite of astronomical phenomena in the Universe? Sabine Hossenfelder has the story!

The growing acceptance of Erik Verlinde’s work indicates to me a turning away from the particle based paradigm that has fixated physics and cosmology for so long. It is being more widely recognized that quantum entanglement forms the basis of reality and that the nature of space/time emerges from it. Like gravity, even the other previously considered fundamental forces of nature emerge from the properties of entanglement. This includes not only gravity but also the strong and weak forces which will be found to also emerge from entanglement.

By manipulating entanglement, engineering may open up new vistas of nuclear force control. The field that is emerging to do this engineering is called Low Energy Nuclear Reactions (LENR).

The field that is emerging to do this engineering is called Low Energy Nuclear Reactions (LENR).

I'm not sure I understand your point. Are you saying that emergent force is a scam like Low Energy Nuclear Reactions (LENR)? Are you saying the physicists investigating those lines of inquiry are like the LENR con-artists trying to steal money from the gullible? Can you clarify how you think those theorists to be thieves like those pushing LENR? I'm just not seeing it.

I'm not sure where you get from anything written in this article that acceptance of Verlinde's work is growing. All it's really saying is that some of the earlier criticisms of it are invalid. It still predicts galactic rotation curves only about as well as MOND theories, and it cannot make predictions (at least not yet) about larger scale structures or the CMB temperature fluctuations. It pretty much does just as well as MOND theories and is weaker than dark matter.

Of course, even if it turns out to gain acceptance, it has NOTHING to do with LENR, which is pretty much regarded as garbage at this point and will continue to be until and unless LENR proponents actually put forth evidence for their theory. Things like, well an actual repeatable experiment where the energy inputs and outputs are measured in a scientifically valid manner and in which the contents of the "black box" are available to be analyzed pre and post reaction. If LENR can demonstrate actual power output and prove that the LENR reaction actually took place, then maybe it would be taken seriously. Of course, serious scrutiny by the scientific community is the LAST thing LENR proponents are looking for.

Yes, sadly human nature is so weak and despicable and what you say holds truth, and yet there are some noble exceptions whose magnanimous souls and angelic nature love truth for its own sake and show unselfish altruism if encouraged. The outputs of LENR are mostly strange matter mesons, pion and muons. Excess heat is not always produced by the LENR reaction.

Leif Holmlid, one of those pure and rare souls who has devoted his life to science and the pursuit of truth will attempt to show subatomic particle production this summer by placing a miniaturized version of his experiment inside a full scale particle detector in an attempt to document how a chemical catalyst can produce subatomic particle emissions. One of his associates who is working on downsizing his experiment told me about this effort to be attempted this summer.

I have discounted LENR as a viable and egalitarian energy technology. This unregulated and widespread common usage of the LENR reaction seems to be the dream and objective of all LENR developers. But at the end of the day, I doubt that this dream will come to pass.

Rossi, Industrial Heat, their big moneyed hangers on, and all the other LENR developers will be heartsick when they realize that they will need to dance to the tune of the Nuclear Regulatory Commission (NRC) and the electric utility industry, all their best efforts and monumental investments will have come to naught. Their dreams of unlimited wealth like riches, beyond the dreams of avarice will be sundered into dust.

On the other hand, the impact on science will be great when LENR theory is well understood and this new found understanding will drive science in new and revolutionary directions far and away in importance to any significance that LENR based energy production will catalyze. But the research of Holmlid will capture most of those scientific discoveries more readily than any LENR based reactor will. Like its kissing cousin - nuclear engineering, it is now apparent that LENR cannot meet the aspirational goals of over unity energy production, such as simple, uncomplicated, direct, home based, unregulated and widespread common usage.

Axil "thinks" that if he's right on one piece of science (Verlinde) he can claim he's right about another (LENR).

That they don't link is really just part of what makes axil axil.

I’m not sure where you get from anything written in this article that acceptance of Verlinde’s work is growing.

Having said that, Axil is only mentioning the OP as an excuse to bring up his off-topic pet subject. I'm amazed he bothered to even read it before posting, so I wouldn't give his false impression much weight.

When Holmlid’s discoveries burst upon the scene to confound and astound science, you good old boys will have had at least a sneak preview of the big show that will forever change the course of science. “It means, Buckle your seatbelt Dorothy...'cause Kansas...is going bye-bye.”

You DO know that cypher was the asshole bad guy, right?

Anyway, care to shut the fuck up until that day of kansas going on vacation happens?

LOL, that triggered a memory. I think you used that exact phrasing last year about LENR. Or the year before last. I forget. Isn't it funny how Kansas/mainstream science is always apparently on the cusp of going bye-bye but never actually goes bye-bye?

Good. Know your place. Which is to listen and learn.

What? You'd thought that your subservience could be played for shaming others? No fucking way. Everyone wins when you STFU about things you really don't have a clue will turn out.

It’s good to read of a possible alternative to EGR. Granted, it has miles to go etc., but it’s still a contender. It will be fun to see how far it can go.

It’s good to read of a possible alternative to EGR.

What does EGR stand for?

Welp, seems that there’s still no word on whether it’s actually going to work for the ultimate test of any dark matter alternative: galaxy cluster and cosmological scales. It’s easy enough to make a modified gravity that works for everything up to galactic scales, but every attempt so far has not gotten past that point. If Verlinde can show that emergent gravity can reproduce the Bullet Cluster and the CMB anisotropies, then maybe he might really be on to something big. Jury’s still out though.

My money is on Einsteinien General Relativity but I hope the John will come back and clarify.

Denier, you are correct.

With dark matter it makes perfect sense : the dark matter, since it doesn't interact much with itself or normal matter, is slightly off the normal matter when a galactic collision occurs.

But if there is no dark matter, but the stronger gravity required to explain the outer stars orbiting speed is due to changes to gravity itself, shouldn't the gravitational lensing map match with the matter map ?