Universe's largest structure caught in the act of forming (Synopsis)

"On a cosmic scale, our life is insignificant, yet this brief period when we appear in the world is the time in which all meaningful questions arise." -Paul Ricoeur

When it comes to the largest bound cosmic structures, it doesn’t get any bigger than galaxy clusters. Unless, that it, you consider when multiple galaxy clusters merge together. Located at the intersections of cosmic dark matter filaments, smaller clusters flow into the larger clusters located at such a nexus. When we get very lucky, colliding clusters can be seen. 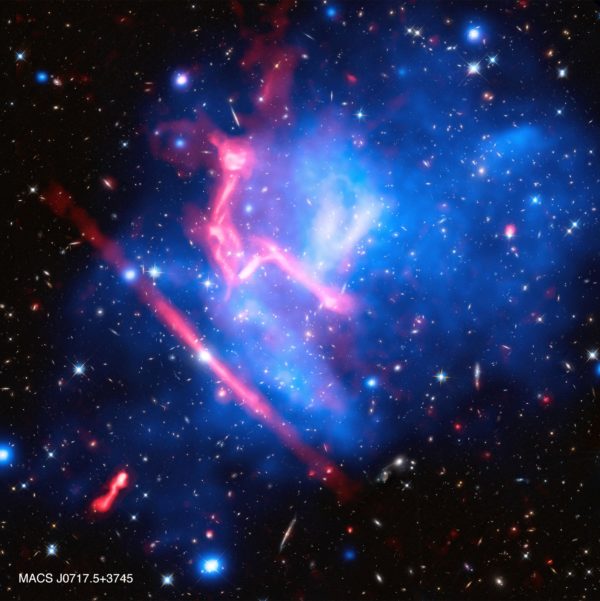 Recently, scientists have located a cosmic smash-up between four such clusters in the large structure MACS J0717.5+3745. One of the clusters within is moving so quickly -- 3,000 km/s -- that the light within it gets shifted thanks to the speed of the electrons within it. X-ray, radio and optical/IR data combine to reveal a treasure trove of information, including active galaxies, a separation between normal and dark matter and even information about the inflows along the cosmic filaments. 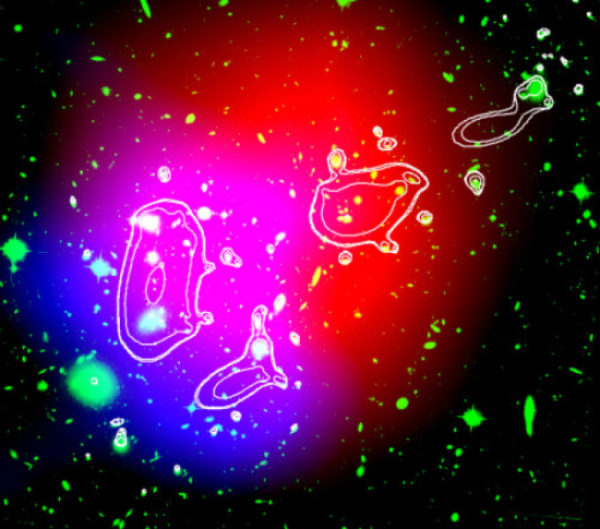 This may be the messiest galaxy cluster ever found, but it’s also the most instrumental in understanding the formation of the Universe’s largest structures. Catch it on today’s Mostly Mute Monday!

Observational evidence like this does strengthen the case for particulate Dark Matter, Dr. Verlinde’s emergent gravity notwithstanding.

I know it’s just some silly pareidolia on the last image in the synopsis, but might they be called, from left to right: the fried egg cluster, the slug cluster, the chick cluster, and the fish cluster? :D

Do you have "Monster Munch" there? The second on the right looks like the Pickled Onion crisp....

Hey, Anonymous Coward, if you know anything about science you should know you might otta copyright those names. Har Har
There are those of us that believe dark matter is nothing more than particle sized and up, primordial black holes formed at the time of the Big Bang. If this is true then wouldn't it be likely that it is possibly (the/a) source of gravity throughout the Universe?
Since dark matter seems to be unevenly distributed throughout the Universe it would seem that planets, stars, and even whole galaxies formed in the regions where it appears to be more concentrated, would have a stronger gravitational field than say.....here, where it is much thinner.
It would be very unfortunate to travel to an Earth sized planet only to discover it has100+ times our gravity. But fortunately there doesn't seem to be any large concentrations anywhere and the region of our solar system....but then again, it IS hard to detect.
I guess you all know that what we refer to as a "Universe" is nothing more than a single event of a MASSIVE Supermassive black hole reaching its limitations and turning inside out. These events are happening throughout the infinite void that All else exists within.
The VOID, unlike the EVENT that we call a Universe, is nothing but a type of Perpetual Machine, constantly changing matter to energy and energy to matter in an endless cycle with supermassive black holes being both the start and end of each cycle. Big Bangs are thick as thieves outside our viewing range unless one happens to turn up within the one we now reside in that is. A Universe iwithin a Universe is probably not as unusual as you would think. We ourselves could be within an older Universe and not even know it.
The Grand Unified Theory is just as simple and as long as Einstein's E equals MC squared but I'll give the Scholars a bit longer to figure this out on their own before I Dazzle them. :-)
One thing about black holes is that we were all once a part of one and will be again some day. Probably the only way the whole human race will ever come together on one thing. Ha Ha
See ya'll there! ::-)

the status quo answer seems to be, “burn all the fuel and let the climate change, unfettered by environmental conservation efforts.” But I can’t help myself in being dissatisfied with the status quo in this regard

There was leader named Saloth Sar who leaned to the left politically. He wanted to lead his people into a more sustainable “green” economy and was willing to curtail some freedoms to accomplish his greater good. Climate Scientists, and indeed many Scientists seem to want that too. That they don’t know who Saloth Sar is or what he did without running to Wikipedia is why they shouldn’t get any more say than Joe Sixpack on ‘what we do about it’.

It’s interesting to me that you find public opinion and actions designed to sway public opinion just as valid — or perhaps even more valid — than what the actual science says.

I bring up the example of Saloth Sar to drive home the point of scientific motivations being the least important part of ‘what we do about it’. It ISN’T the thought that counts. Ignorance doesn’t absolve the body count. The history books are full of failed and working examples. A thorough understanding of economics is helpful. Theory of government is important, and public opinion a.k.a. the consent of the governed is crucial to determining ‘what we do about it’. Climate Scientists can’t help with any of that. In fact they seem downright disdainful of it as they forever try to drag the conversation back to the science, their little area of comfort.

Perhaps your retort will be that you love economic success and (what you define as) freedom too much, and that’s our fundamental impasse here?

Are we at an impasse? I say some true stuff that supports my position. You say some true stuff that supports your position. I think we retread the same ground because it is easier. I give you kudos for trotting out those pieces earlier about curtailing speech and holding scientists to standards. Of course I went at you with a rhetorical baseball bat because you’re wrong but at least you had the courage to step beyond the charts, graphs, and computer models to discuss what we should do about it. Most people are cowards and wouldn’t do it. I hope my reaction doesn’t discourage you.

I’ll end with this: My driving motivation is in trying to give my 4-year old son the best world I can. I have learned that people can be far more threatening than can a tenth of a degree or a few millimeters of ocean rise. Given what I do know about economics, governments, history, human nature, and the threat of a warmer climate, I’m satisfied with my position currently but it’s always adaptable as I learn more.

"There are those of us that believe dark matter is nothing more than particle sized and up, primordial black holes formed at the time of the Big Bang."

"Believe" being the right word there. It's not like you have any valid theory supporting it that doesn't just handwave the problems away.