Time crystals are real, but that doesn't mean time is crystallized (Synopsis)

"Every particular in nature, a leaf, a drop, a crystal, a moment of time is related to the whole, and partakes of the perfection of the whole." -Ralph Waldo Emerson

When you think of crystals, you likely think of an interlocked, repeating lattice of atoms or molecules. That’s exactly what a conventional crystal is. But recently, there’s been an exciting new idea, first proposed by Frank Wilczek in 2012: that it would be possible to create a time crystal, an entirely new class of system. 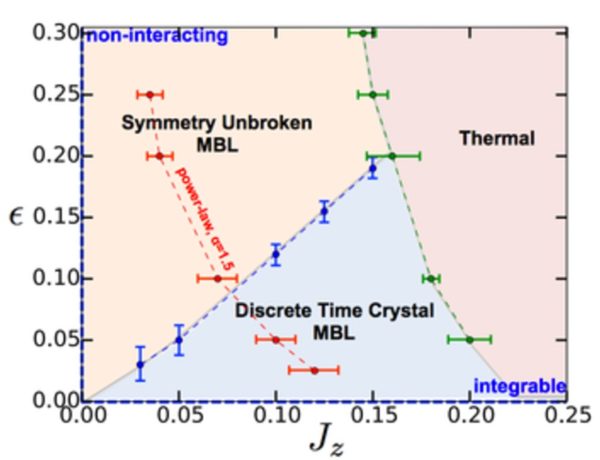 You might think that this means that time -- rather than atoms or molecules -- are crystallized, but that’s not quite right. Instead, particles that are coupled together would spontaneously return to the same state, breaking the symmetry known as time-translation invariance. A method for building one was proposed just last year, and already two independent teams have made it work!

Come get the story on time crystals, including what they are, how they work and what it might mean not just for physics, but for our future.

Yeah, never really accepted that time crystals were a thing. Just a result of a way of modelling time in a theory. A bit like when they talk about slowing down the speed of light. Doesn't really, it just impedes the time taken for the energy to reach the destination.

Someday in the not-too-distant future, there may be a Nobel Prize split between Wilczek, Yao, Lukin and Monroe. The only big debate, if it happens? Who gets left out. The Nobel Prize is limited to three people, maximum, and so that's a debate that goes well beyond anything that the science can decide.

If it is a Nobel it won't be decided on scientific merit. That Rosalind Franklin was snubbed for the discovery of DNA proves that. Maurice Wilkins got a share of that Nobel and all he did was have a key to Franklin's office that he used to steal her unpublished research to show to Watson and Crick.

Last year when Trump was talking about banning Muslim immigrants and building a wall, all 6 of the Americans to receive Nobel prizes were Immigrants. For Wilczek, Yao, Lukin and Monroe it will just depends on what political statement they want to make that year. They gave a Nobel to Obama and all he did to earn it was be President for 34 weeks.

If I had to guess, it is not looking good for Christopher Monroe. He's a white, male, non-immigrant American. With the way the Royal Swedish Academy of Sciences works, I'm betting it will be Monroe that gets snubbed unless one of the others conveniently dies. Nobels can only be awarded to the living. If they wanted to give it to Monroe they would have done so for his work with David Wineland. Wineland got the Nobel. Monroe got snubbed. He'll get snubbed again or the Royal Swedish Academy of Sciences will just wait until one dies before recognizing the accomplishment.

This :"But the ability to make a system, that when all you do is pulse it in a particular way, returns, periodically, to a uniform state over and over again, is truly remarkable." triggered the thought that such might describe the big bang and the essence of this universe. Obviously no evidence for such but the dynamic plays into the idea of the universe being cyclical.