Ask Ethan: How Bright Is The Earth As Seen From The Moon? (Synopsis)

"I put up my thumb and shut one eye, and my thumb blotted out the planet Earth. I didn't feel like a giant. I felt very, very small." -Neil Armstrong 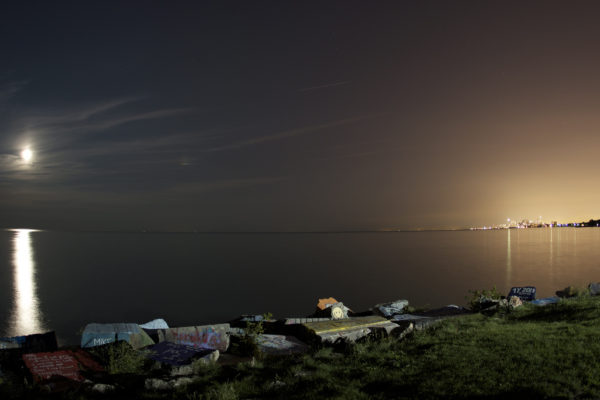 The rising full Moon and the city of Chicago, as viewed over Lake Michigan from Northwestern University's campus. Image credit: colinbrownell of flickr.

But the Earth has the Moon beat on the only two intrinsic properties that matter: size and reflectivity. The much larger size of Earth means that a “full Earth” as seen from the Moon has 13 times the surface area as the full Moon as seen from Earth. But on top of that, the Moon, as bright as it appears in the sky, is actually a relatively dull grey in color, more similar to charcoal than it is to a snowy white. The Earth, on the other hand, has icecaps, clouds, and highly reflective continents, particularly where deserts are involved. 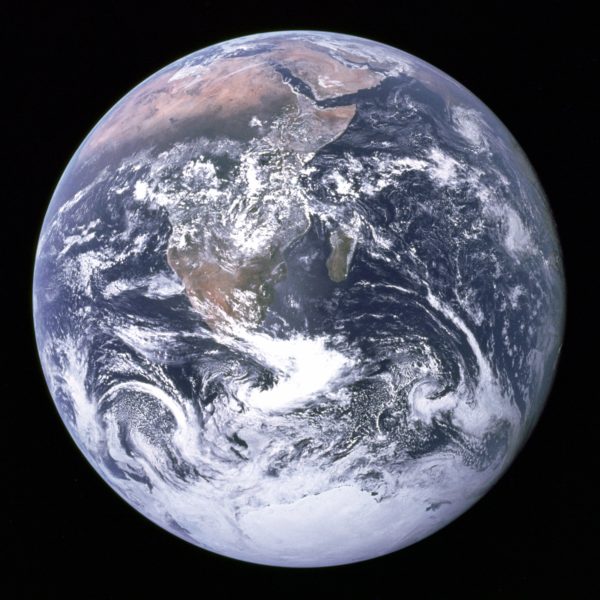 When a view of the Earth includes large amounts of cloud cover, the southern polar cap and large deserts over land, its high reflectivity can make it up to 55 times brighter than the full Moon. Image credit: NASA / Apollo 17.

So how bright is the Earth as seen from the Moon by comparison, and what does this tell us about these worlds? Find out on this edition of Ask Ethan!

More than an order of magnitude brighter that what we see!

Another moronic post from you, teabaggie. You have nothing to say and nothing to add but do so anyway, because you're a retard.

"... You have nothing to say and nothing to add but do so anyway, because you’re a retard."

Ah, I see. And your post adds ... what? Discourtesy? Intolerance of others? Bellicosity?

I dream about this, to see the Earth from the lunar surface.

Yes! How cool would that be? I'm too old now to have a chance to do that, but I sure hope you live to see it!

I wonder what it would take to create a tiny but clearly visible (to naked eye) laser spot on the dark or full moon?
Is it possible to do with today's laser tech?
What color laser would be the best?

I saw that XKCD before but it does not really consider very narrow focused tiny point spot illumination.
Normal laser beam gets distributed to a very wide area after reaching moon. Answer there is "oh, well lets ignore that and just try to add more lasers to illuminate the whole surface".

If such narrow focusing of laser beam is really impossible then how laser propulsion for space probes (to other stars?) can be taken seriously.

I wonder what it would take to create a tiny but clearly visible (to naked eye) laser spot on the dark or full moon?

Stars are visible as a tiny spot because they're so bright. Either it has to be bright so that diffraction is the limit making the spot visible, requiring vapourising levels of light, or it has to be physically large so it extents a spot visible over a quarter million miles. Work out how much energy the moon reflects, multiply by the area above and work out how much energy that is. And then you have to be enough more than that to be visibly a spot.

If such narrow focusing of laser beam is really impossible

Diffraction is impossible to avoid. Wave nature of light. To remove diffraction would require the removal of wave features and prove that light is a classical particle.

then how laser propulsion for space probes (to other stars?)

You don't have to accelerate all the way. But laser boosting is out of atmosphere, not interstellar or even interplanetary. why take 90% of the mass in fuel and container up there only to burn it all and throw it away when you can keep that fuel in the gravity well and send the reaction up to the craft instead.

I have to take issue with the caption under the Apollo 8 picture described as "the Earth rising over the limb of the Moon" as it gives the impression that the Earth appears to rise and set to a Moon based observer the way the Moon appears to do so from Earth.

Because the Moon is tidally locked in its rotation the position of the Earth is fixed in the sky. If you lived on a Moon base, Earth would always be there eternally hanging in the same spot.

The reason that the Colonel Anders' videos show the Earth rising is because Apollo 8 was orbiting the Moon at the time. So technically the caption is correct. The astronauts did see the Earth "rising" above the Moon's limb, but it fosters a misconception held by many.