So you walked on the Moon? And then...

"It suddenly struck me that that tiny pea, pretty and blue, was the Earth. I put up my thumb and shut one eye, and my thumb blotted out the planet Earth. I didn't feel like a giant. I felt very, very small." -Neil Armstrong

It still boggles my mind when I think about it, every time I look up at the brightest object in our night sky. 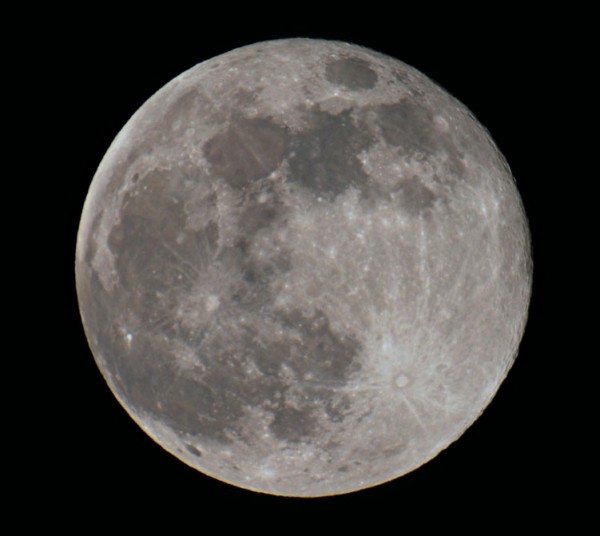 After four-and-a-half billion years, life from Earth made it off of this planet, launching ourselves out of the Earth's atmosphere and away from the bounds of Earth's gravity. 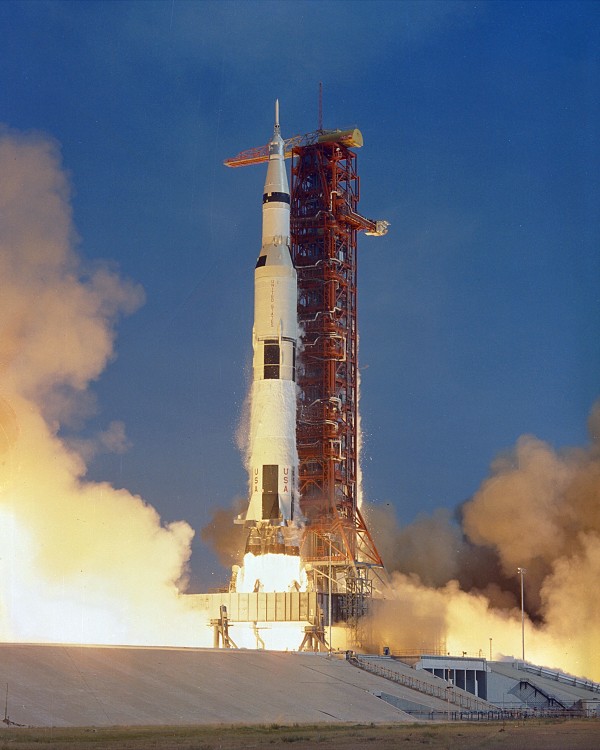 After a more-than-200,000 mile journey, humanity touched down onto the surface of another world: our Moon. 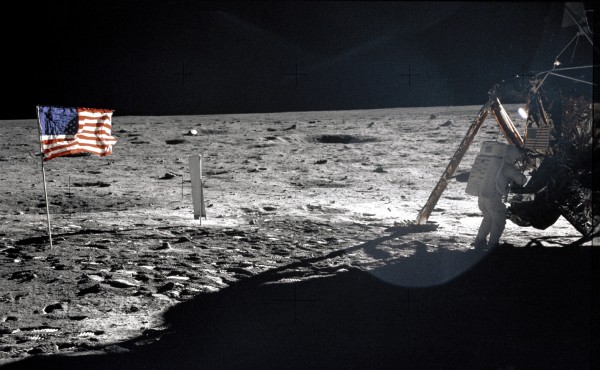 For the first time, in July of 1969, life from our world set foot on another. For those 21 hours, the whole world marveled at just what a remarkable thing it was that we had achieved.

And probably an equally great achievement was successfully leaving the Moon for the return trip to Earth! 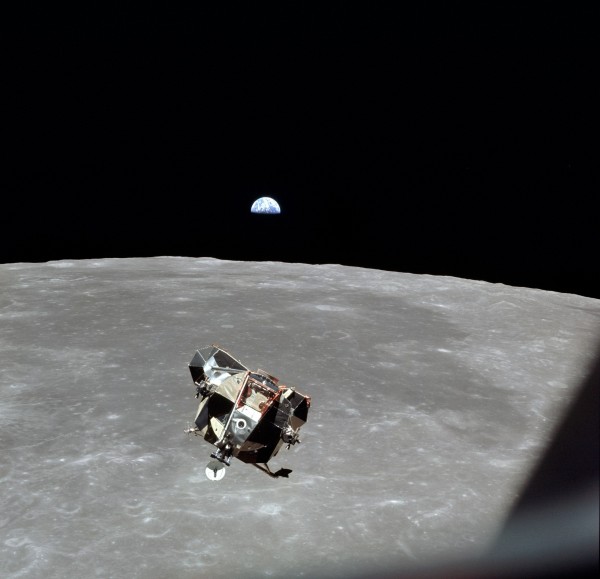 And it was no small accomplishment that, in fact, the entire crew returned safely to Earth, splashing down in the Pacific Ocean -- 900 miles southwest of Hawaii -- on July 24th, 1969. 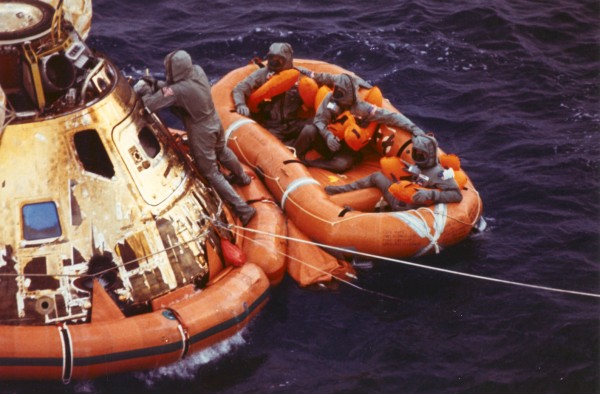 Once they were recovered, it was a two day trip by Navy vessel back to Hawaii.

Of course, not knowing what might be on the lunar surface, the astronauts had to go through decontamination and quarantine, where they remained until August 13th, 1969. 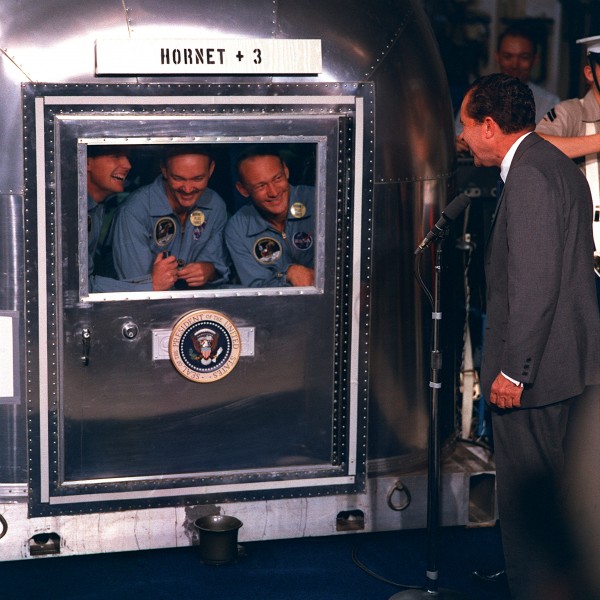 But what was just unearthed recently surprised even me.

Because like you, me, and everyone who leaves the country, even to go to the Moon, the Apollo 11 astronauts had to go through customs! 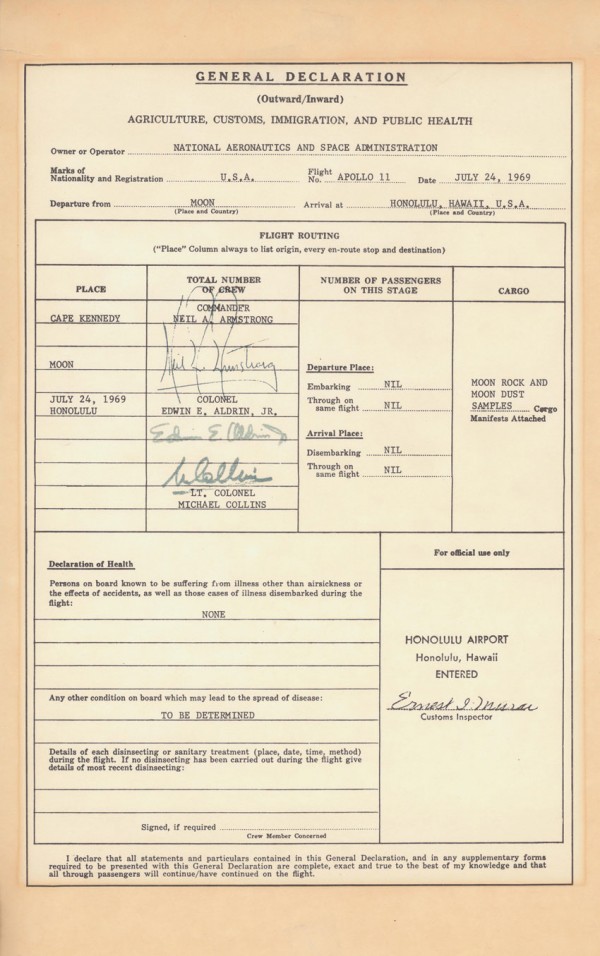 This has been confirmed as the authentic customs and immigration form, and my favorite part of it is right here: 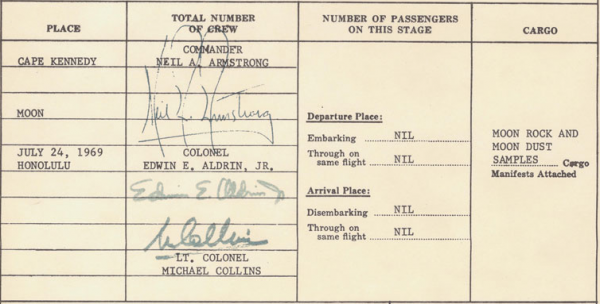 From Cape Kennedy to Honolulu, with a stopover on the Moon. Cargo: Moon Rock and Moon Dust Samples.

(At least they weren't asked to declare the value of their cargo; where's the checkbox for "priceless"?)

The[y] do have a government passport, but they do have to go through customs. Just like the rest of us.

Well, you've read Heinlein's "The Man Who Sold the Moon," haven't you? They had to make sure the astronauts weren't smuggling back pocketfuls of diamonds, of course!

At least they also didn't have to explain if the trip was for business or pleasure.

So decontamination and quarantine was a cover to check if they were carrying lunar cocaine, or maybe a bomb. If the Department of Homeland Security had been there, they would have been questioned about any contacts with the Soviet probe Luna 15.

That's GREAT. I'm not sure if it's for the better or worse that his, "my thumb blotted out the planet Earth," moment occurred long before Kids in the Hall's "crushing your head" bit. :P

At last proof there was a trip to the Moon. Moon landing denialers pack up your toys and go home.

We want to see the long form customs declaration! Why won't Hawaii release it?!?!

They probably just landed in Kenya.

This wasn't released all that recently; I had a printout of this hanging up on my dorm room wall back in college because I found it hilarious and awesome at the same time. That was about 15 years ago. But it does periodically crop up on the Internet again, enjoying brief resurgences of popularity as another batch of people discover it for the first time.

This is not funny. It just proves that bureaucracy even trumps gravitation (as well as the strong and the weak forces). And it is definitely not supported by any higher form of intelligence.

"For those 21 hours, the whole world marveled at just what a remarkable thing it was that we had achieved."

... and then denied it had ever happened.

In some ways humanity is the stupidest species on earth.

"It suddenly struck me that that tiny pea, pretty and blue, was the Earth. I put up my thumb and shut one eye, and my thumb blotted out the planet Earth. I didn't feel like a giant. I felt very, very small." -Neil Armstrong

The moon is a fascinating subject! I just did an article on it and the picture at the start is a man standing in his astronaut suit, next to an American flag and in front of his moon buggy! You can sit in awe looking at that picture for a while!

It's a romantic idea, and I imagine it will eventually happen, people going to the moon for a weekend getaway! LOL! But if you study the science involved, no matter how beautiful it is, death is lurking around every moon rock. Radiation, 250 below 0, or 250 above 0, etc.

But, when Kennedy told the world we are going to the moon by the end of the decade NASA had no idea how that was going to happen. So, here's hoping they can pull another rabbit out of a hat and we all do end up sitting in an easy chair, looking up and enjoying the beauty of the big blue marble!
Dave Briggs :~)