Finding Earth's Twin In Space May Be Impossible (Synopsis)

"You can spend too much time wondering which of identical twins is the more alike." -Robert Brault

When we think of the idea of “Earth’s twin,” we inevitably think of a planet like ours orbiting a star like ours at the same distance and speed. Most planets are not rocky and Earth-sized; most stars are not like the Sun; most planetary orbits don’t have Earth’s orbital parameters. Yet the idea that a twin of our planet is out there, and that’s the most likely place to look for life, persists. 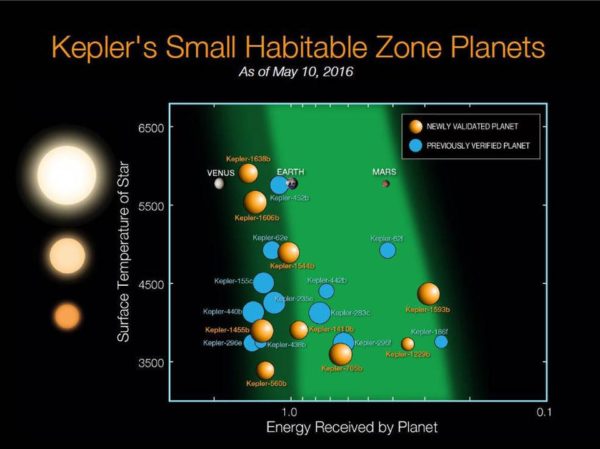 Although many of the Earth-like candidates from Kepler are close to Earth in physical size, they may be more like Neptune than Earth if they have a thick H/He envelope around them. Additionally, they predominantly orbit dwarf stars. Image credit: NASA Ames / N. Batalha and W. Stenzel.

Why would that be the case? Of the billions and billions of Earth-sized planets in our galaxy alone, only a very small percentage meet our naive “Earth twin” criteria. Yet there are billions meeting other criteria that may well be habitable, meaning that unless complex life is heavily restricted to worlds around Sun-like stars for hitherto undiscovered reasons, we may be looking for all the wrong things by seeking a twin to our world.

While the brightest stars dominate any astronomical image, they are far outnumbered by the fainter, lower-mass, cooler stars out there. Image credit: NASA/ESA/Hubble/F. Ferraro.

Finding a twin of our world may be practically impossible, and far less useful that we generally assume. The best place to look for life may not be around an Earth-twin at all.

Most of Earth's twins aren't identical, or even close!

"You can spend too much time wondering which of identical twins is the more alike." -Robert Brault You've of course heard by now the news that Kepler, the most successful and prolific planet-finding mission of all time, has probably reached the end of its useful lifespan. Image credit: NASA /…

First, there were big-giant planets discovered orbiting other stars. Then, more recently, a planet in the star's Goldilocks Zone ... where water would be at least sometimes liquid, were it present. But that was a big planet that may or may not have been truly "class M" in having a surface,…

How much like Earth is Kepler's new planet? How we'll find out!

"Life is not a miracle. It is a natural phenomenon, and can be expected to appear whenever there is a planet whose conditions duplicate those of the Earth." -Harold Urey One of the most exciting investigations going on right now in space is NASA's Kepler Mission, which is on the hunt for planets…

First Exoplanet Smaller Than Earth: Why I'm Not Surprised

"Continue to surprise those who would put you in a neat demographic. Be insistently curious." -Gordon Gee Twenty years ago, our Solar System was the only one we knew of that we were certain had planets orbiting around a main-sequence star. Image credit: retrieved from Universe-Review.ca. Perhaps…

Few years ago I had read that hundreds of famous scientists sent a signed letter to NASA to not just search for carbon-based life, search for other kinds of life too.
But I don't if they suggested any practical way how exactly such a search can be done.

Or they thought NASA should figure out the "little details"?

You can find possible biologic sources by looking for non-equilibrium atmospheric concentrations. Our atmosphere is vastly enriched in O2 because of all the plants respiring. O2 doesn't require carbon-based life.

But it doesn't have to be "look for O2 out of kilter". Methane well outside norms could do it (therefore Titan would be a strong candidate for looking, whilst Mars is not).

And liquid water is a solvent, so water would be used extensively for any life, not just "life as we know it".

It's a harder job, true enough. And very speculative.

But it's not like the job is ever going to be easy, is it.

The Kepler star opens for us all the opportunity to live in a better place.
The option is open and even you can purchase land!
www.earth-kepler.com