Can Moons Have Their Own Moons? (Synopsis)

"People who work every day are kind of scared of things they don't understand." -Young Jeezy

From Mercury out to Neptune, most of the worlds in the Solar System have moons, with a hitherto discovered population of around 200 known ones. Yet despite all of it, we don’t know of a single instance of a moon that has its own natural satellite: a moon with a moon of its own. But that doesn’t mean it couldn’t exist! 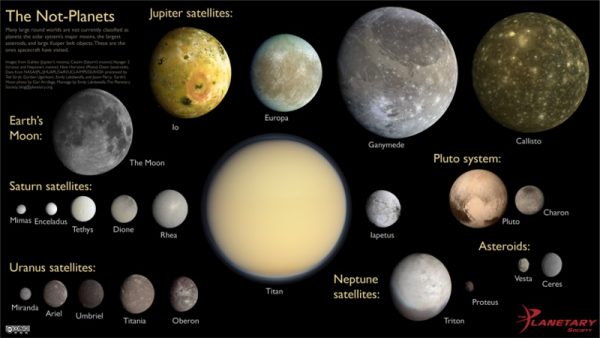 The major moons in our Solar System could contain some objects with candidates for potentially having orbiting moons of their own. If many of these moons were situated differently, astronomers would define them as planets. Image credit: Emily Lakdawalla, via http://www.planetary.org/multimedia/space-images/charts/the-not-planets…. The Moon: Gari Arrillaga. Other data: NASA/JPL/JHUAPL/SwRI/UCLA/MPS/IDA. Processing by Ted Stryk, Gordan Ugarkovic, Emily Lakdawalla, and Jason Perry.

Within our own Solar System, we have many known candidates for moons that would be good fits for having their own moons, including worlds around each of the gas giants. But given the configuration of everything we see, what’s theoretically possible may not be physically realistic. There are a great many reasons why moons-with-moons wouldn’t be stable over the long term, and 4.5 billion years is certainly a long time to require survival! 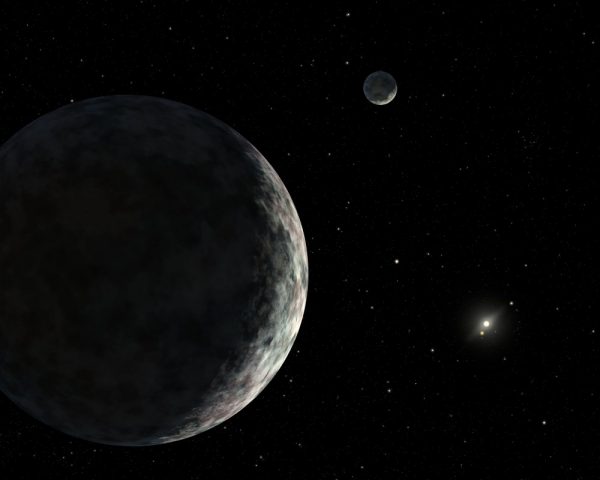 Of course, a Kuiper belt object would need to have a moon with its own moon to be considered a moon having a moon. The distances at play would likely need to be very great; at some point, the gravitational binding energy becomes very small and the region you have for success is extremely narrow. Image credit: Robert Hurt (IPAC).

We haven’t found any so far, but it’s possible for moons to have moons of their own. What would it take to make them real? Come find out!

To have a stable moon with a moon system requires finding a stable solution to the three-body problem, which is the classical example of a chaotic dynamical system. Doesn't seem likely unless you can make a few simplifying assumptions like having the masses negligible and the distances great enough. Works out just fine for a star and its planets and their moons, but when you talk about a planet and a moon plus a moon around it, it doesn't seem like you can make the same kind of simplifications to ward off the chaotic solutions.

In summary, it sounds like you are saying there's no reason a moon couldn't have a moon but it probably couldn't hold on to it for very long. Is it possible to make an order of magnitude estimate of how long the more likely satellites could keep a moon? Also, stupidly, moon, mooner, moonest.

You forgot to consider moons of Planet Nine! I'm just kidding, but: do the models that can predict/account for the formation of a Planet Nine in the kind of orbit it's believed to have, have anything to say about the likelihood of its possessing moons, captured or otherwise?

Wonder if it would be more stable if the MOON->Planet was not locked, but moon->MOON were locked.

My takeaway quote of the day:

"... what’s theoretically possible may not be physically realistic."

True wisdom. (No kidding.) Thanks, Ethan. Let's apply that principle to relativity, astrophysics and cosmology ans see how it changes the epistemology of science. (Just wishful thinking.)

Whose theory is it anyway? Any evidence?

How big does an object need to be to be considered a moon of a moon? If a 109 gram pebble was launched into orbit of the Earth's moon for a week or two after we laded on it... would that have been a moon?
Also... Pluto crosses Neptune's orbit around the sun... this means that at least on occasion, Pluto might be considered a moon of Neptune, when they come close enough together and Pluto comes under the influence of Neptune's gravity. Pluto, of course, has Charon would that be a moon of a moon?