"It shows you exactly how a star is formed; nothing else can be so pretty! A cluster of vapor, the cream of the milky way, a sort of celestial cheese, churned into light." -Benjamin Disraeli

From here on Earth, most of the stars we see in the night sky are ancient, having departed from the star-forming regions and open clusters that spawned them many millions or even billions of years ago. But there are still new stars forming in the Milky Way, and the vast majority of these star-forming regions are located in the galactic plane itself. 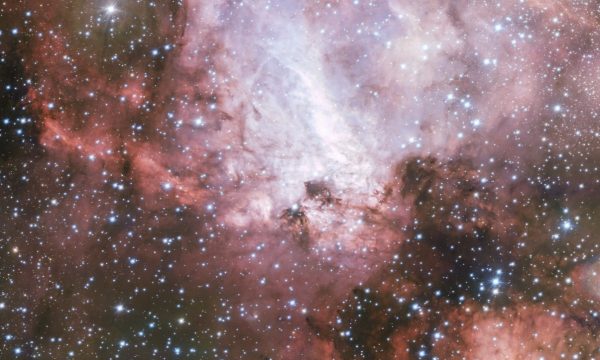 The Omega nebula, known also as Messier 17, is an intense and active region of star formation, viewed edge-on, which explains its dusty and beam-like appearance. Image credit: ESO / VST Survey.

As part of its mission to survey as much of the entire night sky as possible in visible light, the ESO’s VLT Survey Telescope (VST) has just released a 3.3 gigapixel composite of a region of the Milky Way containing three spectacular nebulae: the Omega Nebula, the Eagle Nebula, and Sharpless 2-54. While the Omega Nebula is similar to the Orion Nebula and the Eagle Nebula is larger and still active, Sharpless 2-54 is an ionized region caught in-between waves of star formation, presently inactive. The brilliant young clusters visible inside are all that will be left of all these nebulae once the gas burns away.

One of the many clusters in this region is highlighted by massive, short-lived, bright blue stars. Within only about 10 million years, the majority of the most massive ones will explode in a Type II supernova. Image credit: ESO / VST survey.

The images are incredible, and there’s an interactive, zoomable version you won’t want to miss. Get it all in no more than 200 words on Mostly Mute Monday!