Seven Things You Must Anticipate For The 2017 Solar Eclipse (Synopsis)

"Nations, like stars, are entitled to eclipse. All is well, provided the light returns and the eclipse does not become endless night. Dawn and resurrection are synonymous. The reappearance of the light is the same as the survival of the soul." -Victor Hugo

On August 21, 2017, the Moon will pass between the Earth and the Sun, casting its shadow onto the Earth’s surface and causing a total solar eclipse. For the first time since 1979, a portion of that eclipse will cross the continental United States, with the path of totality running coast-to-coast and crossing through 14 states. It’s poised to be a record-breaking, breathtaking eclipse in a number of ways. 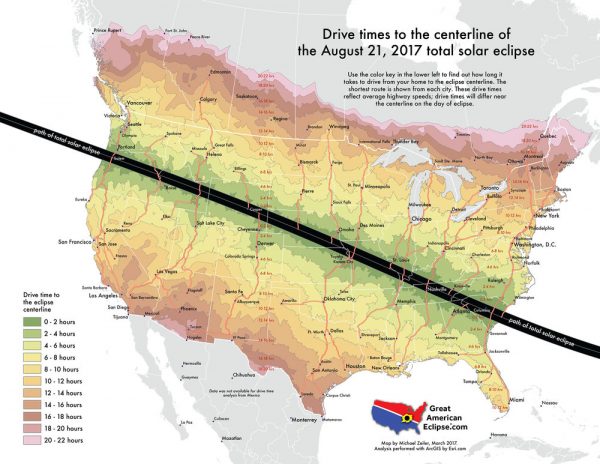 More than 2/3 of the American population is within a single day's driving distance of the path of totality. This could create the worst traffic jam in American history. Image credit: Michael Zeller / greatamericaneclipse.com.

It may turn out to be the most-viewed eclipse in history; it may create the world’s largest traffic jam ever. But it may also be a spectacular sight and experience that the majority of people have never seen. With over 200 million people within a single day’s drive of totality, you can bet that it’s going to be one of the most spectacular events of the entire decade. 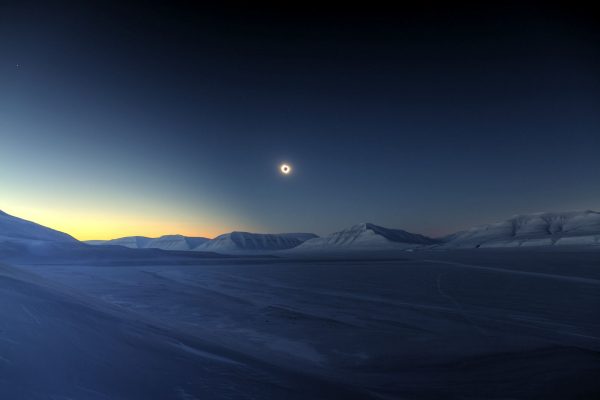 Typically, temperatures drop during a total solar eclipse by approximately 10 degrees Fahrenheit, although drops as large as 28 degrees have been recorded. Image credit: Luc Jamet.

Here are seven things you must anticipate for the 2017 solar eclipse, coming this summer to a daytime sky near you!

This article made me wanna check when the next total eclipse will be in Europe. Saw the one in 1999. Next one to pass me will be in far away 2081, which I most likely won't live to see. :( One per life-time.. that's sad.

No mentioning of the glorious 1919 eclipse. Even Brian Greene, the most faithful Einsteinian in the Universe, knows that Eddington's 1919 confirmation of Einstein's relativity was a fraud:

http://backreaction.blogspot.com/2015/04/a-wonderful-100th-anniversary-…
Sabine Hossenfelder: "As light carries energy and is thus subject of gravitational attraction, a ray of light passing by a massive body should be slightly bent towards it. This is so both in Newton's theory of gravity and in Einstein's, but Einstein's deflection is by a factor two larger than Newton's. [...] As history has it, Eddington's original data actually wasn't good enough to make that claim with certainty. His measurements had huge error bars due to bad weather and he also might have cherry-picked his data because he liked Einstein's theory a little too much. Shame on him."

http://discovermagazine.com/2008/mar/20-things-you-didn.t-know-about-re…
"The eclipse experiment finally happened in 1919. Eminent British physicist Arthur Eddington declared general relativity a success, catapulting Einstein into fame and onto coffee mugs. In retrospect, it seems that Eddington fudged the results, throwing out photos that showed the wrong outcome. No wonder nobody noticed: At the time of Einstein's death in 1955, scientists still had almost no evidence of general relativity in action."

http://www.reformation.edu/scripture-science-stott/aarch/pages/10-soddy…
Frederick Soddy: "Incidentally the attempt to verify this during a recent solar eclipse, provided the world with the most disgusting spectacle perhaps ever witnessed of the lengths to which a preconceived notion can bias what was supposed to be an impartial scientific inquiry. For Eddington, who was one of the party, and ought to have been excluded as an ardent supporter of the theory that was under examination, in his description spoke of the feeling of dismay which ran through the expedition when it appeared at one time that Einstein might be wrong! Remembering that in this particular astronomical investigation, the corrections for the normal errors of observation - due to diffraction, temperature changes, and the like - exceeded by many times the magnitude of the predicted deflection of the star's ray being looked for, one wonders exactly what this sort of "science" is really worth."

http://www.newscientist.com/article/mg16321935.300-ode-to-albert.html
New Scientist: Ode to Albert: "Enter another piece of luck for Einstein. We now know that the light-bending effect was actually too small for Eddington to have discerned at that time. Had Eddington not been so receptive to Einstein's theory, he might not have reached such strong conclusions so soon, and the world would have had to wait for more accurate eclipse measurements to confirm general relativity."

http://www.epubsbook.com/books/2203_7.html
Stephen Hawking: "Einsteins prediction of light deflection could not be tested immediately in 1915, because the First World War was in progress, and it was not until 1919 that a British expedition, observing an eclipse from West Africa, showed that light was indeed deflected by the sun, just as predicted by the theory. This proof of a German theory by British scientists was hailed as a great act of reconciliation between the two countries after the war. It is ionic, therefore, that later examination of the photographs taken on that expedition showed the errors were as great as the effect they were trying to measure. Their measurement had been sheer luck, or a case of knowing the result they wanted to get, not an uncommon occurrence in science."

https://www.youtube.com/watch?v=dAJn0D4y5ic
Brian Greene (6:47) "Eddington's data, with a little bit of massaging, seemed to show that Einstein's ideas were correct."

Sabine Hossenfelder: "As light carries energy and is thus subject of gravitational attraction, a ray of light passing by a massive body should be slightly bent towards it. This is so both in Newton's theory of gravity and in Einstein's, but Einstein's deflection is by a factor two larger than Newton's. [...] As history has it, Eddington's original data actually wasn't good enough to make that claim with certainty. His measurements had huge error bars due to bad weather and he also might have cherry-picked his data because he liked Einstein's theory a little too much. Shame on him." http://backreaction.blogspot.com/2015/04/a-wonderful-100th-anniversary-…

Kip Thorne: "A second crucial proof of the breakdown in Newtonian gravity was the relativistic bending of light. Einstein's theory predicted that starlight passing near the limb of the sun should be deflected by 1.75 seconds of arc, whereas NEWTON'S LAW PREDICTED NO DEFLECTION. Observations during the 1919 eclipse of the sun in Brazil, carried out by Sir Arthur Eddington and his British colleagues, brilliantly confirmed Einstein's prediction to an accuracy of about 20 percent. This dealt the final death blow to Newton's law and to most other relativistic theories of gravity." http://commons.erau.edu/cgi/viewcontent.cgi?article=3169&context=space-…

Is there a liar among the two authors above? If there is, to whom will go the Nobel prize this year - to the liar or to the other author?

Eddington's 1919 observations may have come down to systematic error and confirmation bias, but subsequent observations have been done again and again since and confirmed GR's predictions of the bending of starlight by gravity.

Do you ever use a smartphone navigation app? The Global Positioning System that depends on would not work correctly if it didn't account for the gravitational time dilation predicted by general relativity. The first GPS satellite was launched without the clock adjustment fixes that subsequent satellites were provided, and they saw that its clock was shifting at the rate of 38 µs per day, exactly as GR predicts, enough to cause an error that would accumulate at the rate of 10 km/day.

No, general relativity is correct enough as far as that goes.

October 23, 1976 total solar eclipse across Victoria, Australia was a great experience. Drove from Melbourne to a little town called Dunkeld from where we should get about 4 minutes worth. Lots of photo's was the anticipation. Camped overnight, freezing butts off in our respective tents. Next day, the event. Bloody clouds! Set up the equipment anyway, just in case of a break. As the time approached, nature displayed itself in the form of birds settling down for the 'night', ants scurrying back to their homes; then silence filled the air. You could almost feel the onset of darkness sweeping over you as the event began.
Managed to get some shots off (35mm film in those days) in between clouds, but missed the totality. Natures preparations are still a highlight of the experience. After the apparition of darkness passed, life returned to normal; birds waking again, the rest of life getting about its business as if a new day had dawned.
The downside to all this? If we had stopped in Ballarat, we would have experienced the whole eclipse. Seems the bad weather moved to the western part of the state only. Sheesh!
Regrets? No, the experience of nature was welcome.