"By its very nature science knows no boundaries. Walling off any group, for any reason, from full participation damages the entire enterprise of science. We must be scientists without borders." -Rocky Kolb

We normally think of “let there be light” as when the Universe got its start. In a particular sense, this is true, since you can go back to a time before stars and galaxies existed, when the Universe was only a few million years old or less. But even before the first star, there was still light.

According to the original observations of Penzias and Wilson, the galactic plane emitted some astrophysical sources of radiation (center), but above and below, all that remained was a near-perfect, uniform background of radiation. Image credit: NASA / WMAP science team.

And while that light’s origin can be traced back to the cosmic microwave background and the formation of neutral atoms, there was light even earlier than that. In fact, the very first light arose from the annihilation of matter and antimatter, and from the end of cosmic inflation at the very beginning of as far back as we can trace. 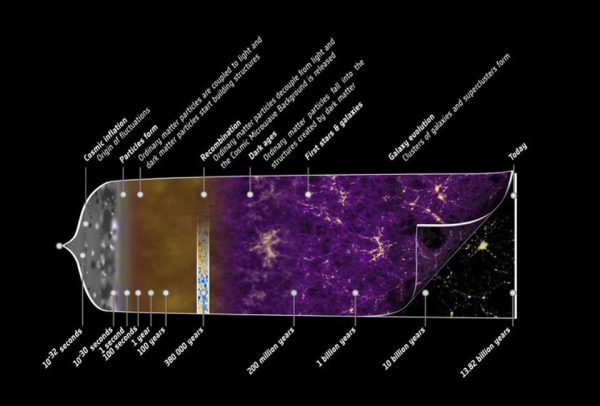 The cosmic history of the entire known Universe shows that we owe the origin of all the matter within it, and all the light, ultimately, to the end of inflation and the beginning of the Hot Big Bang. Image credit: ESA and the Planck Collaboration / E. Siegel.

There was no light until the hot Big Bang occurred, and it’s the end of cosmic inflation that triggers this true “first light.”

It is unreasonable to claim that "empty space has more energy than everything in the Universe" (Ethan Siegel, 2012) and at the same time to believe that the noise now known as CMB is not a product of this energy but just traverses it, unchanged. Too many fairy tales in Einstein's schizophrenic world.

It's very interesting that there was no light during the period of cosmic inflation before the big bang, although that makes sense based on the public's existing view of the big bang, explanations of the beginnings of the universe, and that space was expanding quickly enough to spread out any preexisting particles and create the flatness of space that we observe today.

So, this isn't anything new, despite the headline's present tense, or was there some new aspect of this that just came out?

Every so often, you respond to a question about the edge of the universe, like this one from 27May17:

"If the universe is finite in volume, then is there a boundary? Is it approachable? And what might the view in that direction be?"

I thought that was a great question! However, you answer immediately went off on a tangent about how we see into the past as we look further into the universe, then wrapped it up by saying that if we were as far away as the distance we can currently detect, but in the present, we'd just see more of the same, etc.

If there's a boundary between inflating and non-inflating space, no matter how far away it might currently be, and we were on our side, and close by, and safe, (etc.) what would it look like?

Would it be Dark, because there wouldn't be any photons coming in from that side, as you brought up in this article? Bright, because of a boundary where space was still ceasing to inflate, releasing radiation similar to the big bang?

Are these questions that don't make sense, and if so why?

I ask because I'm genuinely interested, and I think it's possible that the answer to the question about the edge of the universe didn't give the person asking it enough credit.

IMO one reason for not being able to give a precise answer (although I can't speak for Ethan's reasons, but I know he doesn't like to speculate that much) to the latter part of the question is because it's heavily dependent on the particular model of inflation. In other words, there isn't one single model of inflation that everyone agrees on. All models do share basic fundamental concepts, but also differ in the outcomes. Thus you have eternal inflation, you have slow-rolling inflation... and so on.. Not all models produce multiple bubble universes etc..

Other part deals with some things that we just don't know.. nor is there anything about our current universe that might give insight into it... i.e. what would the space between bubble universes look like. We can speculate, but there is nothing in our experience to say it will be like this or like that. It might be just plain old empty space... or it might be some highly energetic unified primordial field where no forces exist separately... or something else entirely..etc... Same for the "edge" of a finite universe... there might be nothing there, there might be a firewall.. or in fact the our bubble universe (not observable, but actual) could in fact be curved positively, and there is no edge as such)... but we just don't know, nor do we have ways to probe it. We can probe our observable universe and nothing beyond it.

Maybe a little clarifying of the cool particle-less inflationary period would be in order. I'd always envisioned an energy density at least as high as during the first moments of the big bang. But I guess the expansion was so fast, that any energy (and particles), were diluted away faster than it can "leak in" from curvature?

But no *location* of the origin of the first light in the Universe?

Well Thank God for President Trump as he just revived the 1960s-Era Space Council
Can I get an Amen from you atheist heathens in the crowd?
https://www.bloomberg.com/news/articles/2017-06-30/trump-revives-1960s-…

Ragtag, it is interesting that the Space Council has been revived. This time, it looks like it might be a grab bag for private industry to get its hands in the till. We know that it is required that the government must pay somebody to get anything into space that isn't military. So, I wonder how the payday will work.

PJ,
If the first light turned on everywhere at the same time does that mean that at that time the universe was all light with no darkness anywhere?

Not at all. The process of stars forming does not mean collectively, all stars ignited at the same moment. The birth of stars is ongoing as is the death of them.

Cool. So, god is a bowling ball.

PJ,
That makes no sense to me, given what you said earlier.

@skl
Sorry, bit of a fox paw there.' Began' to turn on once that threshold had been reached. See Ethans reference to the timeline above.

All cosmology which posits a "beginning of the universe" fails to account for how "everything" manifest out of "nothing" in the "first place." Magic has no place in cosmology. Only an eternally oscillating Bang/Crunch model with no beginning or end escape the nonsense of "all from nothing."