“There are two infinities that confuse me: the one in my soul devours me; the one around me will crush me” -Gustave Flaubert

Last week, Donald Trump restored the National Space Council, promising to take America and the world to new heights in space. He also made some statements claiming that this is infinity here, and that we don’t know, but it could be infinity. In both cases, the statements don’t quite match the facts, as the funding cuts proposed by the President are inconsistent with increased exploration efforts, and, more to the point, we know we’ll never access infinity. 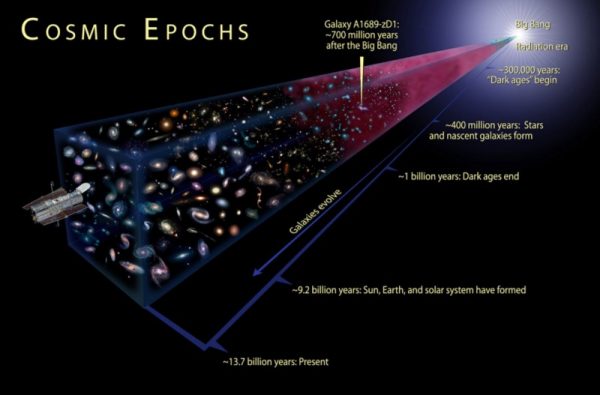 Looking back to great cosmic distances is akin to looking back in time. We are 13.8 billion years since the Big Bang where we are, but the Big Bang also occurred everywhere else we can see. The light-travel-time to those galaxies means we're seeing those distant regions as they were in the past. Image credit: NASA, ESA and A. Feild (STScI). 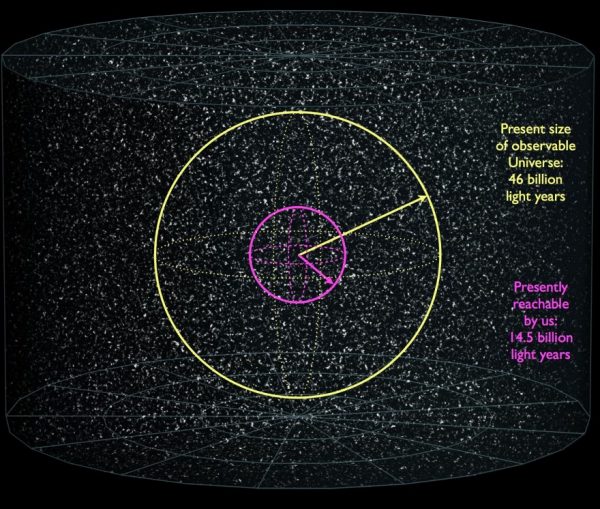 The observable (yellow) and reachable (magenta) portions of the Universe, which are what they are thanks to the expansion of space and the energy components of the Universe. Image credit: E. Siegel, based on work by Frederic Michel and Andrew Z. Colvin of Wikimedia Commons.

Don’t bring your uninformed opinion to a matter that can be settled by scientific fact, but rather bring an open mind and a willingness to learn. There’s a whole Universe out there worth knowing!

Perhaps we will know infinity when we are astrally harvested.

Maybe Trump figured since Buzz Lightyear says it, perhaps it's legit, and decided to go with it.

If there is one thing his lifetime of experience will have taught him, it's that Adam Savage was right - he really can reject our reality and substitute his own.

@Ethan,
So....you really have nothing to say this time? Maybe you should keep your mouth shut then...until you actually have a topic of conversation besides 'Trump isn't using the word infinity correctly.' Sheesh Ethan. Get a life, or at least a clue.

Here's a topic worth discussing, the climate record being adjusted for political effect.
.
https://thsresearch.files.wordpress.com/2017/05/ef-gast-data-research-r…

Oh pooh! Let Ethan fuss if he feels the need. It’s his blog and he feels his ox is being gored. Let him vent.

People wonder why the current president is viewed as a massive embarrassment: his meaningless jumble of words in that "speech" should be one of the primary points of evidence.