This One Imperfection In Nuclear Physics Allowed Earth To Exist (Synopsis)

"The discovery of deuterium and the marked differences in the physical and chemical properties of hydrogen and deuterium, together with an efficient method for the separation of these isotopes, have opened an interesting field of research in several of the major branches of science." -Harold Urey

By time the first few minutes of the Big Bang are over, the Universe has formed all the elements it’s ever going to form until the first stars are born. At that point, the Universe is made out of 75% hydrogen and 25% helium, with only tiny, trace amounts of other isotopes and elements like deuterium, helium-3, and lithium-7. 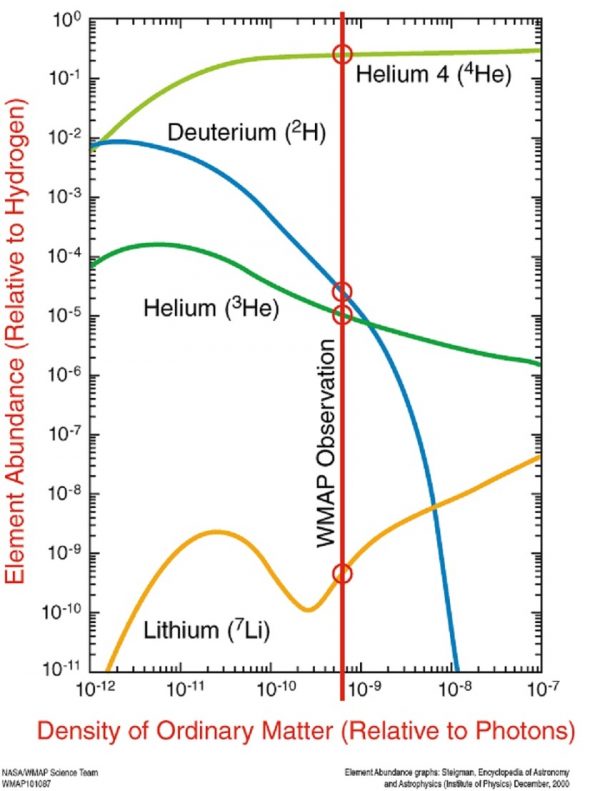 The abundances of helium, deuterium, helium-3 and lithium-7 are highly dependent on only one parameter, the baryon-to-photon ratio, if the Big Bang theory is correct. The fact that we have 0.0025% deuterium is needed to allow stars to form as massive as they do. Image credit: NASA, WMAP science team and Gary Steigman.

Yet if the Universe were truly hydrogen and helium only, you’d never be able to form a star more massive than about three times the Sun’s mass, preventing the creation of the heavy elements necessary for life! That tiny, trace amount of deuterium that the Big Bang creates, even though it’s just 0.0025% of the Universe, efficiently pushes back in the core of a young proto-star, delaying the amount of time it takes to ignite true fusion, and enabling stars to become tens or even hundreds of times as massive as our Sun. And yes, that’s more than enough for supernovae to occur. 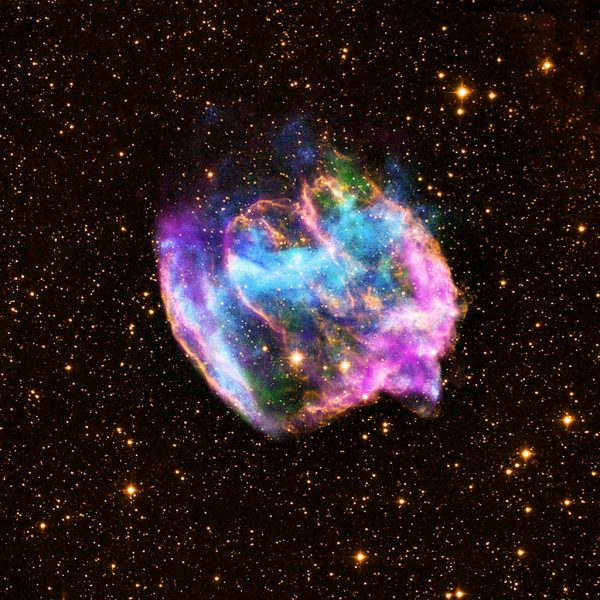 The nebula from supernova remnant W49B, still visible in X-rays, radio and infrared wavelengths. It takes a star at least 8-10 times as massive as the Sun to go supernova, and create the necessary heavy elements the Universe requires to have a planet like Earth. Image credit: X-ray: NASA/CXC/MIT/L.Lopez et al.; Infrared: Palomar; Radio: NSF/NRAO/VLA.

Without this tiny inefficiency in the nuclear reactions taking place in the early Universe, the Earth and life on it could never have existed. Come get the scientific story of how this imperfection helped create you!

Suppose two 3-solar-mass stars form in close proximity. One evolves into a white dwarf after a common-envelope phase, the orbit shrinks, mass transfers from the main-sequence star to the white dwarf, and *poof* Type Ia supernova. The ejecta from the explosion contains plenty of heavy elements.

Why wouldn't this scenario create the makings for some planets, even without Type II SNe?

@Michael Richmond#1: Perhaps it would, but it would take a lot longer than making really big stars would. In that case, the universe even at 13.8 billion years after the Big Bang might have a real dearth of elements beyond carbon, and much of the carbon would be locked in white dwarf stars that haven't gone Ia supernova.

Admittedly type 1a SNs take a while to happen, but they are actually pretty common in the present epoch, and going back billions of years (they were the standard candles that were used to discover dark energy). So we would have some amounts of "heavy" elements generated by the 1a's. I suspect star formation would have been more active, as it ts the heavyweights, type O starts and type 2 SN's that blow star forming clouds apart -and expel gas from galaxies. So galactic evolution would have been quite different. Perhaps black holes would be nearly non-existent. But I suspect rocky planets would still be possible. Though the cosmic abundance chart would be different (would there be Gold and Uranium, or would things stop after Iron?

This graphic which Ethan used in a previous article:

basically sums it up. In a universe where you can't make any stars much bigger than three solar masses, you can basically forget about having significant quantities of any element that is coloured orange or green in the graphic. Most elements in period 5 would be rare, and period 6 and beyond would be essentially non-existent. Oxygen, significantly, is in the list of elements that are created only by exploding massive stars, so "rocky" might need to be redefined. You'd not have silicate rocks because there'd hardly be any oxygen in such a universe.

As the low ignition temperature of deuterium enables my existence, it's not a bug in in the Cosmos' programming; it's a feature.

The graphic mentioned by #4 is a rather simplified view of a complex story. While type Ia SNe may not produce as much oxygen or silicon (or some other elements) as core-collapse SNe, they do send non-negligible amounts of these intermediate-mass elements into the ISM. For example, Marquardt et al. (A&A 580, A118, 2015) shows in Table 2 that several models of type Ia explosions may create ~0.05 solar masses of oxygen and ~0.1 solar masses of silicon.

If heavy elements were not due to come 'essencially dimention of'' changing'did not start,so in that case we did not have essencially,light elements,big bang phenomena,and and all other pre-changes before big bang and we are in the process of artificial changing Now.

The heavens declare the glory of God