"We really expect the mission to be transformational. This is the capstone of the original visits to the planets. It takes us 4 billion miles away and 4 billion years back in time." -Alan Stern

When the Hubble Space Telescope discovered additional moons of Pluto, beyond Charon, it was speculated that New Horizons might find more. After all, objects more than ten times as far away as Hydra, Pluto’s outermost moon, would still be in stable orbits. Yet, with five inner moons and nothing beyond, not even diffuse rings, the spacecraft came up empty. 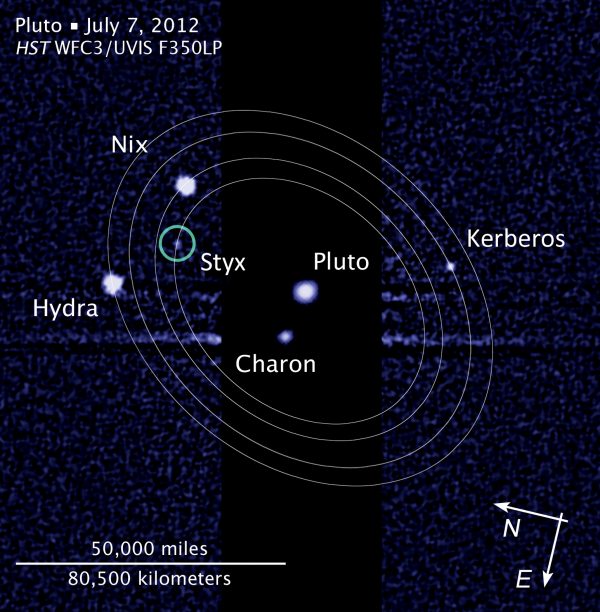 This image, taken by NASA's Hubble Space Telescope, shows all five moons of Pluto in orbit around this dwarf planet. The orbital paths are added by hand, but occur in a 1:3:4:5:6 resonance, and all orbit in the same plane to within one degree. Image credit: NASA, ESA, and L. Frattare (STScI).

This isn’t a disappointment, though! Instead, New Horizons’ detailed observations of all five of Pluto’s moons point towards a tremendous picture: that the entire Plutonian system owes its origin to a massive, ancient collision. The debris kicked up created the five grey moons, in stark contrast to the reddish color of Pluto, in a near-perfect 1:3:4:5:6 resonance. 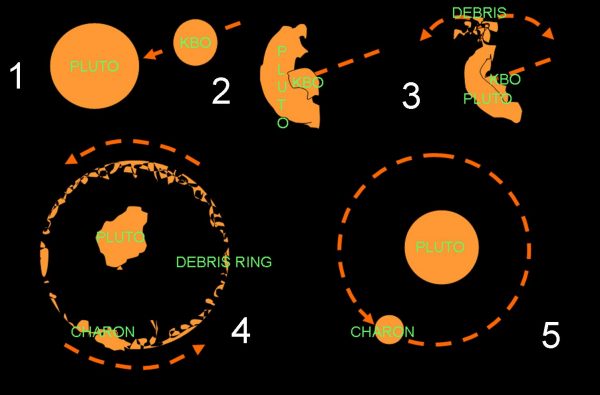 A large KBO impacting a proto-Pluto could have not only kicked up the debris that formed Charon, but you have formed many outer, smaller moons, such as the four known to exist. Image credit: Acom of the Wikipedia Project.

Where did Pluto’s moons come from? Come learn about the ‘Big Whack’ hypothesis, and how all we’ve learned about Pluto spectacularly confirms it!

The heavens declare the glory of God