“Astronomers are greatly disappointed when, having traveled halfway around the world to see an eclipse, clouds prevent a sight of it; and yet a sense of relief accompanies the disappointment.” –Simon Newcomb

On August 21st, a total solar eclipse will travel coast-to-coast across the United States, bringing darkness during the day to portions of 14 separate states. The last time such an event occurred was 99 years ago, back in 1918. Back then, Einstein’s General Relativity still had not been proven, and this eclipse not only provided that opportunity, but held an opportunity for America to rise to scientific prominence in the world. 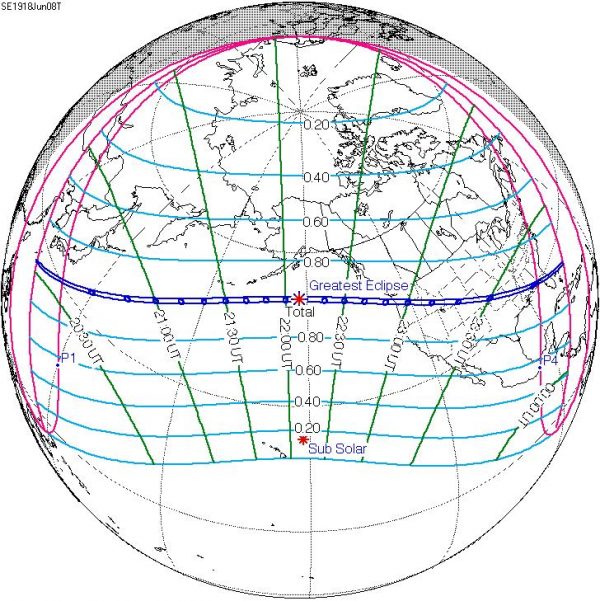 The U.S. Naval Observatory sent a team of physicists to Baker City, Oregon, to attempt to make the critical observations. If Einstein was right, starlight would deflect during the day the closer a star’s position was to the Sun. If nature was kind to those fastidious observers, the data could indicate which theory, Newton’s or Einstein’s, was correct. But at the critical moment, the Americans were defeated by nature itself, in the form of clouds. 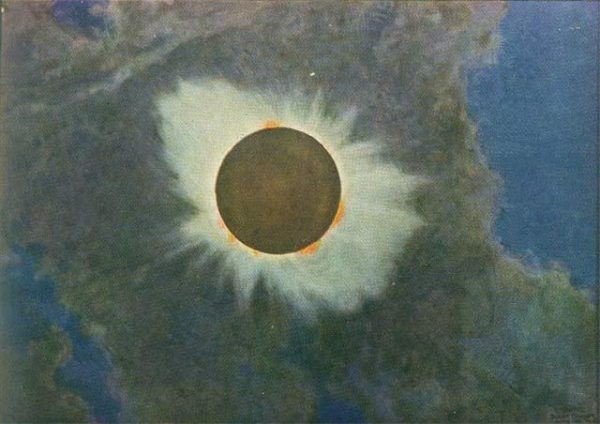 Still, the last Great American Eclipse almost proved Einstein right. As the 2017 eclipse approaches, take a look back at a little-known slice of American history!

Ethan Siegel: "The next total solar eclipse, in 1919, was observed by two teams led by Arthur Eddington: one in South America and one in Africa. By combining data from both teams, a number of stars were not only successfully observed, they were observed to be deflected by the Sun's gravity by an amount in accord with Einstein's predictions, not Newton's."

Repeating the lie until it becomes truth?

Sabine Hossenfelder: "As light carries energy and is thus subject of gravitational attraction, a ray of light passing by a massive body should be slightly bent towards it. This is so both in Newton's theory of gravity and in Einstein's, but Einstein's deflection is by a factor two larger than Newton's. [...] As history has it, Eddington's original data actually wasn't good enough to make that claim with certainty. His measurements had huge error bars due to bad weather and he also might have cherry-picked his data because he liked Einstein's theory a little too much. Shame on him."

Discover Magazine: "The eclipse experiment finally happened in 1919. Eminent British physicist Arthur Eddington declared general relativity a success, catapulting Einstein into fame and onto coffee mugs. In retrospect, it seems that Eddington fudged the results, throwing out photos that showed the wrong outcome. No wonder nobody noticed: At the time of Einstein's death in 1955, scientists still had almost no evidence of general relativity in action."

Frederick Soddy: "Incidentally the attempt to verify this during a recent solar eclipse, provided the world with the most disgusting spectacle perhaps ever witnessed of the lengths to which a preconceived notion can bias what was supposed to be an impartial scientific inquiry. For Eddington, who was one of the party, and ought to have been excluded as an ardent supporter of the theory that was under examination, in his description spoke of the feeling of dismay which ran through the expedition when it appeared at one time that Einstein might be wrong! Remembering that in this particular astronomical investigation, the corrections for the normal errors of observation - due to diffraction, temperature changes, and the like - exceeded by many times the magnitude of the predicted deflection of the star's ray being looked for, one wonders exactly what this sort of "science" is really worth."

New Scientist: "Enter another piece of luck for Einstein. We now know that the light-bending effect was actually too small for Eddington to have discerned at that time. Had Eddington not been so receptive to Einstein's theory, he might not have reached such strong conclusions so soon, and the world would have had to wait for more accurate eclipse measurements to confirm general relativity."

Stephen Hawking: "Einsteins prediction of light deflection could not be tested immediately in 1915, because the First World War was in progress, and it was not until 1919 that a British expedition, observing an eclipse from West Africa, showed that light was indeed deflected by the sun, just as predicted by the theory. This proof of a German theory by British scientists was hailed as a great act of reconciliation between the two countries after the war. It is ionic, therefore, that later examination of the photographs taken on that expedition showed the errors were as great as the effect they were trying to measure. Their measurement had been sheer luck, or a case of knowing the result they wanted to get, not an uncommon occurrence in science."

PV, does your wall of text say anything about more recent measurements of gravitational lensing? Just 2 articles from this blog:

We get it you don't like Einstein or relativity, but a bunch of quotes about luck and errors in 100 year old experiments when there are a bunch of more recent/accurate measurement isn't going to convince anyone that reads here, you know that. You have yet to engage one of these topics you don't agree with saying WHY it is wrong or the actual data/measurements you have to back it up.

Engage the people who read hear with something substantial for a change.

And nobody since 1919 has bothered to do this test during an eclipse, with better equipment? Or has Big Einstein silenced them all? Watch out, YOU may be the victim of BE's reign of ERROR!

A quibble, you state "Meanwhile, the continental United States wouldn't see another eclipse until the present day, a streak that will finally come to an end next year: on August 21, 2017."

While snarky, I mean to elucidate a real point:
Science must be reproducible. Given that there have been about 100 eclipses on earth since 1919, some enterprising skeptic or another has had ample time to make their name disproving Einstein.

Seriously, if somebody does the measurements, and shows that Einstein was wrong, they get a Nobel Prize.

It may well be true that the “solar eclipse test” of Sir Arthur has been replicated. When is the last time you remember the New York Times and the Illustrated London News reporting the successful repetition of an experiment?

Assuming for the sake of argument that it has not been done, I’d hazard a guess that the reason for the non-event is because other tests of GR have been performed, and that their results were consistent with the results predicted by GR. Why use an archaic technique to test (and if successful, confirm) a theoretical prediction when more accurate and less expensive experiments are at hand?

Our good Pentcho Valev has provided a relevant quote from Dr. Soddy, “… in this particular astronomical investigation, the corrections for the normal errors of observation – due to diffraction, temperature changes, and the like – exceeded by many times the magnitude of the predicted deflection of the star’s ray being looked for …” Sending multiple science teams to remote corners of the earth for extended periods to secure a set of photographs during an interval lasting only a few minutes is not only a risky experiment and non-trivial effort, but includes a price tag that discourages doing so on a whim.

There is an abundance of alternative confirmations of GR; the one you likely carry with you in your smartphone is the GPS courtesy of the U.S. DoD. The mere fact that GPS hails from that source may cause some to pause and question its effectiveness, but then they would also need to call into question GLONASS (Russian), and Galileo (EU). All three satellite navigation systems rely on theoretical predictions from both Special and General Relativity to provide your location to within 5 to 10 meters.

Should you be interested in learning how this GPS “experiment” confirms GR hundreds of thousands of times each day, you can follow this link: http://www.astronomy.ohio-state.edu/~pogge/Ast162/Unit5/gps.html

The GPS confirmation is fraudulent, like all other confirmations of Einstein's relativity. One calculates the distance between the satellite and the receiver by multiplying the time by Einstein's constant speed of light, obtains a wrong value (because the speed of light is variable, not constant), "adjusts the time" in order to fix the wrongness, and finally Einsteinians inform the gullible world that Einstein's relativity is gloriously confirmed:

Quote: "Your GPS unit registers the exact time at which it receives that information from each satellite and then calculates how long it took for the individual signals to arrive. By multiplying the elapsed time by the speed of light, it can figure out how far it is from each satellite, compare those distances, and calculate its own position. [...] According to Einstein's special theory of relativity, a clock that's traveling fast will appear to run slowly from the perspective of someone standing still. Satellites move at about 9,000 mph - enough to make their onboard clocks slow down by 8 microseconds per day from the perspective of a GPS gadget and totally screw up the location data. To counter this effect, the GPS system adjusts the time it gets from the satellites by using the equation here. (Don't even get us started on the impact of general relativity.)"

“The GPS confirmation is fraudulent …”

That truth claim is contradicted by the success of the various SatNav systems.

They all integrate both Special and General Relativity predictions into their design (in which the speed of light in a vacuum is a constant), and as these engineering efforts perform accuracy as predicted by the theories, the “experimental results” confirm the theories many times each day.

I do recommend you read up on the subject. The article at the link I provided is quite lucid.