“Honestly, if you’re given the choice between Armageddon or tea, you don’t say ‘what kind of tea?” -Neil Gaiman

Enjoying the Perseid meteor shower this year, as perhaps you do every August? As you look up, the great cosmic show might have a lot more to offer than mere streaks of light, due to cometary debris brightly burning up in the Earth’s atmosphere. This year, Jupiter has slightly disturbed the debris stream, resulting in an increase in the number of meteors-per-hour, as the stream passes quite centrally through Earth’s location. 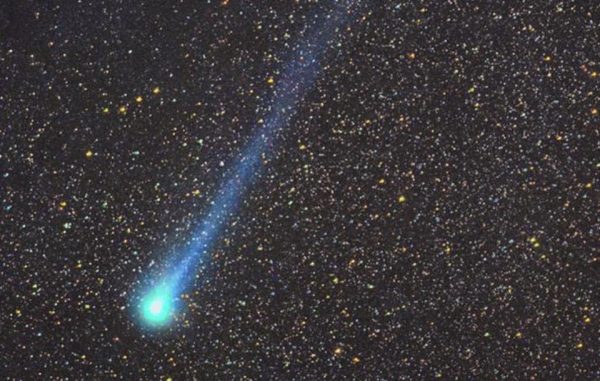 The comet that gives rise to the Perseid meteor shower, Comet Swift-Tuttle, was photographed during its last pass into the inner Solar System in 1992. The influence of the gravity of the other planets has the potential to dramatically change its orbit, however. Image credit: NASA.

Someday, unless we continue to get lucky, Jupiter just might have that same effect on the comet that spawned the Perseids: comet Swift-Tuttle. Only, instead of an enhanced shower, we’d get struck by this comet. With a top speed of 60 km/s and a size of 26 km in diameter, this would result in an impact 28 times more energetic than the impactor that wiped out the dinosaurs. 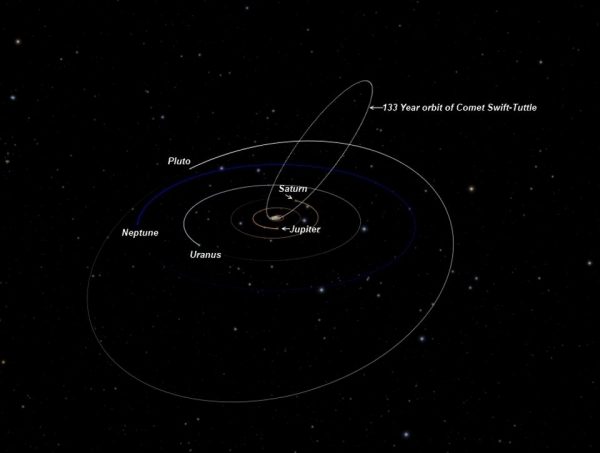 The orbital path of Comet Swift-Tuttle, which passes perilously close to crossing Earth's actual path around the Sun. While there is no danger to Earth for at least ~2400 years, the meteors from the cometary debris will grace our skies every year for the foreseeable future. Image credit: Howard of Teaching Stars.

Comet Swift-Tuttle is the single most dangerous object known to humanity. Come enjoy our continued existence and learn about our possible future demise, while you still can!

The thing that amazes me is that an impact is possible at all. The solar system is 5 billions years old. Swift-Tuttle has had to make this loop hundreds of millions of times. It just seems there would be an orbital harmonic set up by now including everything left in the solar system. One quick glance at the moons and of rings around Saturn proves there is plenty of orbital chaos left to be worked out. It just serves as a reminder that what I think of as a long time isn't the same as what the universe thinks of as a long time.

As some perturbation must have occurred in the past to induce the comet's current orbit, I suppose it's only a matter of time before another gravitational nudge changes it again. Another pass through the galactic equator perhaps?

No. Objects like that evaporate on much shorter timescales. In a few million years, it will be gone, even without collisions or dramatic changes to it's orbit.

The diameter of our milky way galaxy is only 100000 light years and its age is over 13 milliard years (almost as old as our universe).so we can assume that our galaxy is a small universe in our complete universe.our galaxy has about one milliard planets,if we divide 13000 000 000 by 100 000 we will have130 000 Which means that our galaxy is one hundred and thirty tousand times older than The wave can travel its diameter,if we accept that only 1000 of 1000 000 000 planets in our galaxy have The same condition as like as our earth.when we don't have any signals from aliens in our galaxy ,it means that The chance of impacts to prevent other planets to have a life with higher technology than human on earth was at least 999 times in 1000 times so we are in a very high risk of dangerous impacts.