"The hurricane flooded me out of a lot of memorabilia, but it can't flood out the memories." -Tom Dempsey

As I write this, the gulf coast is currently being battered by Hurricane Harvey, with a few locations already having accumulated more than three feet of rainfall. This storm shows no signs of letting up anytime soon, as it's forecast to remain roughly where it is for days to come. This is being billed as a 500-year-storm, but the truth is far scarier and more sobering: this should be exactly what you'd expect for a city located where Houston is. 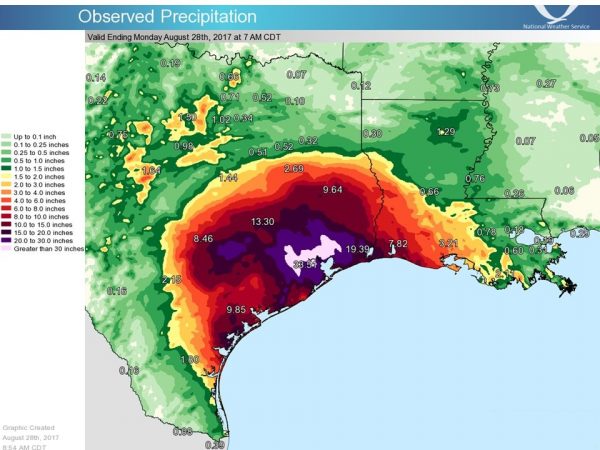 The way hurricanes form, along with other tropical storms, is when fast-moving winds occur over high-temperature ocean waters. As global temperatures have increased, so have the severity of hurricanes. When one of them makes landfall and rises in latitude, the critical transition occurs at 30° north or south of the equator, where the prevailing winds change direction. As Hurricane Harvey sits right on that boundary, it seems poised to remain where it is for up to a week, potentially leading to even more catastrophic flooding than occurred during Hurricane Katrina. 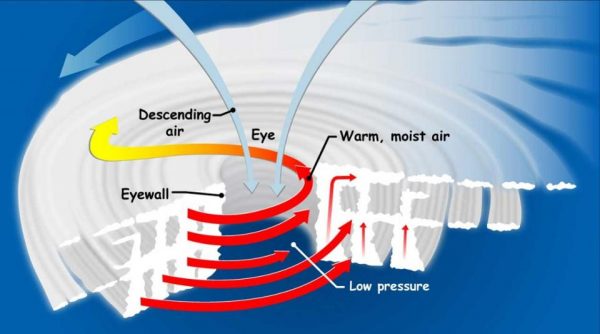 The cloud cells, complete with rising and falling air, which circulates around the 'eye'. Image credit: NASA's Space Place, via http://spaceplace.nasa.gov/hurricanes/en/.

The science is sound, robust, and legitimate, but the disaster is real and going on right now. Sadly, the worst may still be yet to come.

It's notable to read here of a science that appears essentially the same as was presented to me in primary school many moons ago!

"As global temperatures have increased, so have the severity of hurricanes."
Buzzzzzz... Wrong Answer, Number NEXT?

But..But..But.. wait, we were told by the edumicated like Andrew Emory Dessler who is a climate scientist and Professor of Atmospheric Sciences at Texas A&M University. His research subject areas are atmospheric chemistry, climate change and climate change policy.[

"Get used to it. The weather of the 21st century will be very much like the hot and dry weather of 2011."
Ooopsie he missed that one by a mile.

But he does try and CYA "With Perry's home state suffering a severe drought, Dessler (a native Texan) did not attribute the extreme weather that year (2011) to climate change, but he said, "We can be confident we’ve made this hellish summer worse than it would have been"

Really, he can be confident in what? That his now five year later prediction,( actually 3-4 they had floods last year) has been debunked by the weather.
http://www.chron.com/opinion/outlook/article/Texas-is-vulnerable-to-war…

I see that the witting or unwitting Russian asset, Bottlefly Ragtag Media, is here again to display its sympathy for petro-oligarchy and authoritarianism. It is such a common and stupid authoritarian tactic, to assume that climate scientists and science types will somehow be dealt a lethal blow by attacking the views of one scientific “authority”. Never mind that the views of the target are taken out of context and then used to misrepresent the whole of physical science. Never mind that drought conditions will increase during times when normal weather conditions already favor dryness, and that hurricanes will have the potential to bring in more water during hurricane season. Never mind that warmer oceans evaporate more water and that warmer air can transport more water vapor to target locations than cooler air. Never mind that higher sea levels and warmer oceans spell trouble for coastal cities. If you can't grasp those sorts of concepts, or refuse to represent them correctly, perhaps you should find another site to lay your maggot eggs of misinformation, RT.

Oh, and have a nice day.