Last week, millions of people across the United States got to experience the awe and wonder of a total solar eclipse, many for the very first time. But in a puzzling event, astrophysicist and one of the world’s most famous science communicators, Neil deGrasse Tyson, decided to use his fame to put down a great many people who were excited about this rare cosmic event. And sadly, when someone explained to him why they would (correctly) say that eclipses are rare, Tyson doubled-down with condescension. 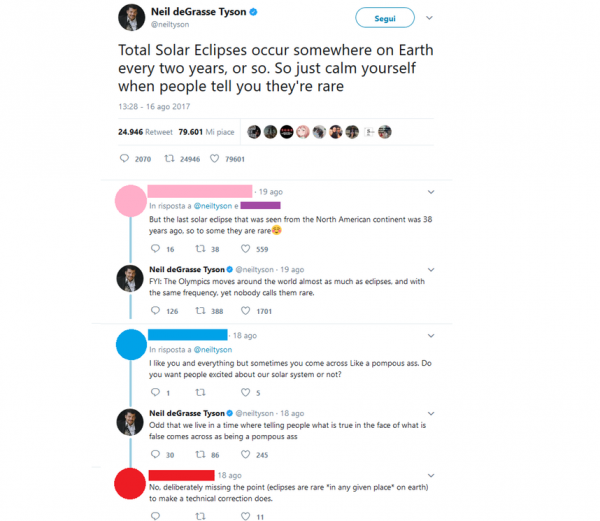 Coming from anyone, this would be a damnable act of gatekeeping: using your own position as an expert within your field to make it less accessible for others. But from America’s most famous living astrophysicist, it’s inexcusable. If science is about anything, it’s about the joy and pleasure of finding things out; of learning about the Universe; of increasing your knowledge; of experiencing the wonder of existence itself. 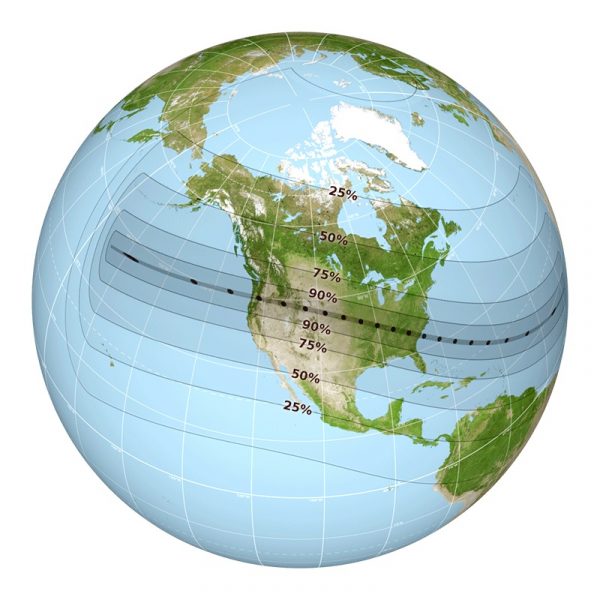 The entire path of totality across Earth's surface, for the August 21, 2017 eclipse. Only 0.26% of the surface experienced totality. Image credit: NASA's Scientific Visualization Studio.

This can be a teachable moment for you, Neil. You may have had a poor moment where you behaved as the definition of pomposity, but it’s never too late to make it right.

Yeah, Neil is right; there are eclipses fairly frequently, but why rain on the parade of people who cannot just quit their everyday lives and go running off to Eastern Asia or Southern Africa when there are eclipses in those places. Most people will only experience an eclipse when it is relatively close to home, as this one was for Americans (as will, of course the 2024 one be as well). Let people just wonder at and enjoy it when they can.

The last time a total eclipse crossed the lower 48 like it did on August 21rst, was something like nearly one-hundred years ago. This means that my father, grandfather and possibly even great-grandfather did not have the opportunity that I had this month. -And he pisses on that for 'not being so rare!?' Bad scientist! Bad!

Ethan,
For once I agree with you in your criticism of Tysons's pomposity an squashing of curiosity and wonder.

But how about your own pomposity as you attempt to squash criticism of what you proudly present as established facts, though they are not? (A long list of examples is extant.)

Neil deGrasse Tyson does not think that people should experience awe and wonder when observing any natural phenomenon. Why, that might suggest that Man is small and insignificant compared to the solar system, or even the earth. Much better if you just stay indoors in your nice artificial habitat and watch the eclipse on a screen [hint: within the path of totality, it's not at all the same].

Every two years (for totality). So how rare does it have to be for Neil to find it exciting? As Ethan pointed out its the only rocky world in our solar system where you can see one and it won't happen anymore in 650 million years. Wouldn't happen at all if Theia had missed the Earth.
The sun rises and falls every day and I can still watch that in awe again and again and again.
That said I think Neil just had a bad day and was tired and jaded by the whole thing - being who he is I bet everyone he met went on and on and on about it. He's not used to that - usually he's the one going on and on and on :-) (I LOVE his story about James Cameron and Titanic and the stars). No big deal. You only have to watch one of his videos to see his tremendous enthusiasm for all things science. Give the guy a break!

Here it is if you haven't seen it.

I think you miss a key point that was happening in the media in the US... that is to say, that while totality is NOT rare... if one lives outside of the academic bubble... one sees popular media feeding an apocolyptic fear that these are the "end times" because of a "rare event" that was foretold in the Xtian folklore and written up as if it was... ahem... 'gospel'. If you see that kind of BS about it being such a rare event, then Dr. Tyson is abolutely correct to point out that people should cool their jets and stop talking about it being such a rare event.

In no fashion does it appear to have been inappropriate for him to say this. But I DO find it inappropriate to call him on it out of context to which Dr. Tyson works to push back on the darkness of superstition... as he clearly feels is part of his life's work, having taken it up from Carl Sagan.

"... one sees popular media feeding an apocolyptic fear that these are the “end times” because of a “rare event” ..."

I missed that. I suppose it depends on what television channels one watches.

@ Ms elliot #7
No question about his enthusiasm. He is a talk show favorite.
It's his arrogance that puts me off. Just like Ethan's.

And they both endorse the mainstream textbook version of GR, SR, Hawking radiation and (for the sake of sci-fi popularity, I must assume) "time travel"... via relativity's "block universe" of spacetime.

Time travel is based on clocks ticking at different rates after acceleration, etc. and space shrinking as a mathematical result (the Lorentz Transformation)... making interstellar travel so much more convenient.

Sure, eclipses aren't rare. But then I did some research earlier on attempts at replicating Eddington's starlight bending observations to test General Relativity, and found that some of the teams who did those observations needed to go all the way to Sudan and Mauritania to do it. The next total solar eclipse is on July 2, 2019, but totality will be visible only from the southern Pacific Ocean east of New Zealand to the Coquimbo Region in Chile and Argentina. In contrast, the eclipse last week happened right over some of the most populated regions of North America. Something like that won't be happening again until 2024.

I spent 45 minutes explaining how an eclipse happens to a young person, with a HS education, who didn't know what the Milky Way is. He spent 1 1/2 hours watching the eclipse with his family with a pair of Celestron 2X eclipse glasses I gave him. (We had 80% totality in our location).

No doubt hundreds of thousands of folks who haven't given "science" a second thought in a long time also joined my friend in experiencing the eclipse.

"And they both endorse the mainstream textbook version of GR, SR, Hawking radiation and (for the sake of sci-fi popularity, I must assume) “time travel”… via relativity’s “block universe” of spacetime."

That's because they understand it MM. You do not.