Could Aliens See Heat-Based Signs Of Life On Earth? (Synopsis)

“The world communicates subtly. Most people don't hear or see the signs because they're so wrapped up in their day-to-day lives.” -Doug Cooper

If you wanted to see if a planet was inhabited in Star Trek, all you had to do was scan for signs of life. With current technology, that's really hard to do! We rely on cues from all across the electromagnetic spectrum to identify biosignatures, such as analyzing the atmosphere, land and oceans for molecular signatures.

This image from Sentinel-2A shows how Saudi Arabia’s desert is being used for agriculture. The circles come from a central-pivot irrigation system, where the long water pipe rotates around a well at the centre. Image Credit: Copernicus Sentinel data (2015)/ESA

But we can also look for visual cues of how humans have modified their terrain and even for visual and infrared images of human beings directly. While the Hubble Space Telescope can obtain resolutions of about a foot, an Enterprise-class starship could do 150 times better, seeing individual humans and their motions in real-time if they desired. 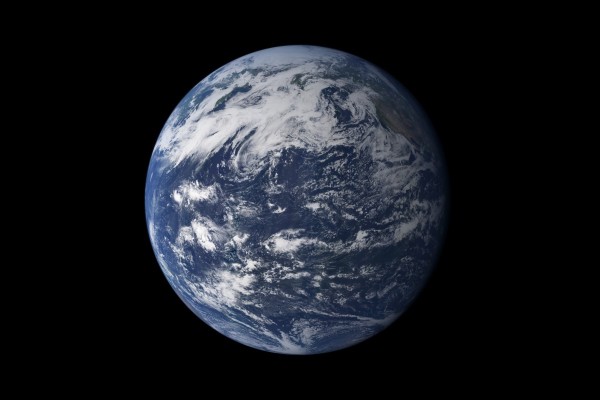 This detailed, photo-like view of Earth is based largely on observations from the Moderate Resolution Imaging Spectroradiometer (MODIS) on NASA’s Terra satellite. Image credit: NASA

Go read the whole piece by Jillian Scudder at Starts With A Bang on Forbes!

I have read that all you would need to do is to look at the color temperature of the earth in the 500mhz and 500 khz range. I understand it is in the millions of degrees so once sufficient time has passed where an alien might be for waves that left earth 65 years ago the aliens would detect changes in the ratio of emissions in the two bands. In addition during the analog tv era if you looked at the broad cast tv bands you would see varying ratios of 50hx and 60hz signals imposed on the transmission by the vertical sync pulses needed to keep the tv and transmitter in sync.

imagine you discovered a planet with an anomoulsly high color temp in one range of radio compared to infrared visible and ultraviolet ranges, what kind of theories would one generate.

For the fact there are transmissions present is an indicator of intelligent activity in the first instance. No need to look for more complicated signatures, unless trying to decipher the signals.
:)

If they exist, I guess the aliens COULD detect heat-based signs of life on earth.

But the probability of them being able to do so would probably be no more than 50%. (Why do we almost invariably assume that the proposed aliens would be as advanced, or more advanced, in terms of intelligence and technology, than us?)

Have you heard of the Cosmic Calendar? It is the idea of projecting the age of the universe on to a single Earth year so as to give an audience a better grasp of time scales. The Big Bang would have happened at midnight on January 1st. The first galaxies formed on January 22nd. The Milky Way Galaxy formed in mid-March. Earth formed in early September. etc.

By that calendar, humans became smart enough to understand radio signals about 1 second before the end of the year.

The Earth used to be vastly brighter in the UHF/VHF bands than our sun (due to TV carrier waves). We use and waste less power doing TV now, but it would still be easier to see intelligence through the radio bands.