A new explanation for dark energy: the matter in our Universe

"For although it is certainly true that quantitative measurements are of great importance, it is a grave error to suppose that the whole of experimental physics can be brought under this heading." -Hendrik Casimir

Ever since we first discovered that the expansion of the Universe is accelerating, scientists have puzzles as to what’s causing it. Although we’ve measured it precisely and concluded that it’s uniform, static in time, and equivalent in its form to a cosmological constant, we still don’t know why it exists. Moreover, any attempts to calculate what its magnitude should be give nonsensical answers that are a factor of 10^120 too large. 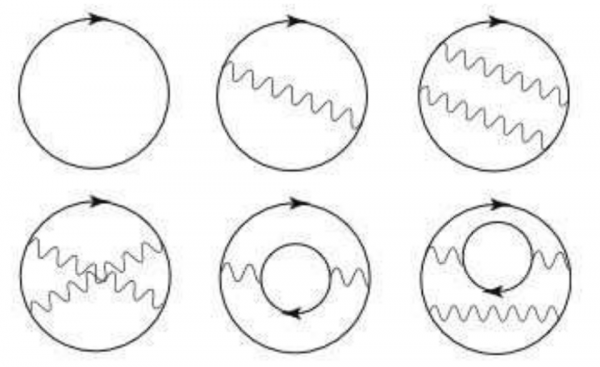 Speculations have abounded that it might be due to an additional force or field in the Universe, or that there should be some experiments or measurements we could make that would surface an anomaly in dark energy. But perhaps the solution lies in a different place entirely: in calculating the Casimir effect for the gravitational force. The Universe isn’t truly empty, but contains huge amounts of matter, and it might be the interplay between the Universe’s large-scale structure and the gravitational fields that exist everywhere in space that causes dark energy to arise. 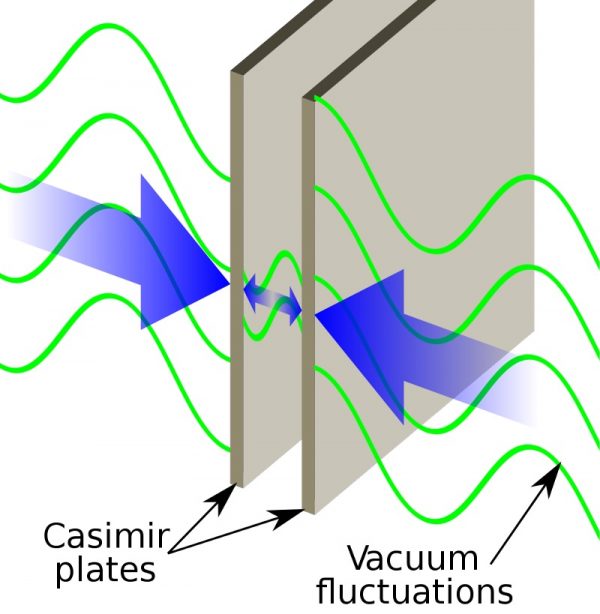 An illustration of the Casimir effect, and how the forces (and allowed/forbidden states of the electromagnetic field) on the outside of the plates are different from the forces on the inside. Image credit: Emok / Wikimedia Commons.

It’s a controversial but plausible possibility, and if it’s correct, it means the solution to dark energy will be theoretical, not experimental.

If physical Black Hole analogue(s) possible, then maybe we should try to find physical analogue(s) for expansion of the universe/Dark Energy.

Here is one idea:
Imagine we have a spherical vacuum chamber in space (negligible gravity). Later we suddenly released a ball of high pressure gas in the center.
I think its expansion speed would start at zero and would keep increasing and its acceleration would start very high but would drop over time.
Of course, the question would be how good that would match to the real expansion of the universe?

Interesting. Haven't heard anyone talk about Casimir effect in context of gravity before. Will have to read the linked paper over the weekend. Thanx for sharing this interesting development.

But I have one slight criticism of the whole article on forbes however :( and please don't take this the wrong way, because it's not meant to sound ungrateful or anything similar. But here's the thing. Almost 2/3rd's of the article is NOT about the new explanation for dark energy. Only at the end did you say what might be the cause and linked the paper.

If the goal is to communicate science and latest things happening in sphere of theoretical physics, why not actually write about this new theory (model) as whole article? I'm sure all of us would like to know more about it. I'm not talking about writing the formulas (that's what the linked paper is for). But actually explain a bit about the connection between casimir effect and mass in terms of the universe. I for one don't actually see the connection between casimir experiment in lab.. and planets and stars or galaxies in the universe and gravitation/casimir effect.

So just saying, instead of writing about how we have black holes and dark matter and quantum theory and universe and intrinsic expansion (which you've written thousands of times before and will continue to write in other articles), why not write more about the actual new thing in more detail. Pretty please, with cherry on top.. and all :)

I'm very interested in this subject. I'm not a scientist. That's why I need to gather information from sites like yours. I've been working on a sort of meta-hypotesis about the 'trouble with cosmology' ... I would like to discuss it with you if you're interested to know more. I cant' put things in a short space like this one, so please let me know if we can exchange ideas in a more comfortable way.
Just to give you some hint: I start from the idea that the universe (or multiverse) may be consequence of a local breakdown(s) of a 'superior symmetry state'; all so called universes (or multiverses) are not 'generated' but the manifestation of a sort of 'lack of completenes' here and there in such a 'global state'. My preferred metaphor is a 'gruyere cheese form': the 'cheese stuff' is like the perfectly symmetric state (impossible in reality, because of Indetermination Principle): all phenomenological universes ara but manifestations of broken symmetries of various kinds. To me this doesn't imply new dimensions but rather explains any already known -or yet unknown- ones. All this may sound slightly metaphisical because it probably is ... What I'd like is to check if it can be brought down to ... science.
Thank you.
Pino
jap@email.it
=========

" Two massive objects experience a gravitational force due to the fact that spacetime is curved by the presence of matter and energy"
Ethan,
"Curved spacetime" is not a "fact" and repetition doesn't make it so. You yourself once referred to it as "nothingness itself" and also as a geometrical/ mathematical tool.

We *know* that space is 3-D volume, whatever it contains, and time is the concept of event duration as things move through space. Yes, we also know that clocks tick at different rates after acceleration (FORCE) to higher velocity or exposure to more of the FORCE of gravity. They don't "measure time" as thermometers measure temperature.
It was Minkowski's invention, adopted by Einstein to substitute for the FORCE OF GRAVITY ACTING AT A DISTANCE, which he rejected.
Maybe the Higgs field will eventually replace "curved spacetime" as the mechanism for the transmission of gravity through space filled with Higgs particles. Maybe not, but curved spacetime is NOT A FACT.

after reading the paper, i'm unclear how this is actually tied to dark energy? The authors don't mention DE in the paper, instead they seem to be looking for a way of detecting graviton. Could you provide some more explanation how this (if experimentaly confirmed) is an explanation for DE? The universe with matter doesn't seem to be a superfluid. If i'm naively looking at casimir effect for two plates, it doesn't really seem to have connection with accelerated sxpansion of spacetime. thank you in advance for shedding some light on this.

I'm not a scientist, but it seems the one thing a new scientific idea needs is a crisp thesis stated at the start. What is the assertion and what are the experiments and existing theories that might expose and measure the claims made in the starting thesis? Or wasn't communication part of your intention posting this? I have a theory. Dark Matter is effected by other Grey Matter(s) that have no direct effect on Light Matter other than the effect they have on Dark Matter. I wouldn't know where to begin with an experimental model nor fathom the effect if true this would have on the expansion of space time or even defining conservation of Light Matter and Energy.

One attractive feature of this approach is that it draws on existing physics rather than invoking new physics.

Just for fun a Gedankenexperiment: Take huge amount of the vaccuum fluctuations and put them into a strong gravitational field. Let the relativistic time dilatation slow down the virtual particle recombination. Observe an amplification of the local gravitational field. It's a pity that the dark matter already explained the expected gravity observations away.