“The more clearly we can focus our attention on the wonders and realities of the universe about us, the less taste we shall have for destruction.” -Rachel Carson

The idea that the spatial fabric of the Universe itself is expanding, and that’s what’s behind the observed relationship between redshift and distance has long been controversial, and also long-misunderstood. After all, if more distant objects appear to recede more quickly, couldn’t there be a different explanation, like an explosion that flung many things outward? As it turns out, this isn’t a mere difference in interpretation, there are observations we can make that tell us the answer!

It isn't simply that galaxies are moving away from us that causes a redshift, but rather that the space between ourselves and the galaxy redshifts the light on its journey from that distant point to our eyes. Image credit: Larry McNish of RASC Calgary Center.

The Universe is not expanding ‘into’ anything, despite what your intuition might tell you. The Hubble ‘constant’ isn’t actually a constant, but is rather decreasing as time goes on. The Universe looks like it’s going to expand forever, but even that scientific conclusion is subject to revision depending on what data shows in the future. And although 97% of the galaxies in the Universe are already unreachable, it isn’t a violation of relativity or a faster-than-light phenomenon that’s to blame. 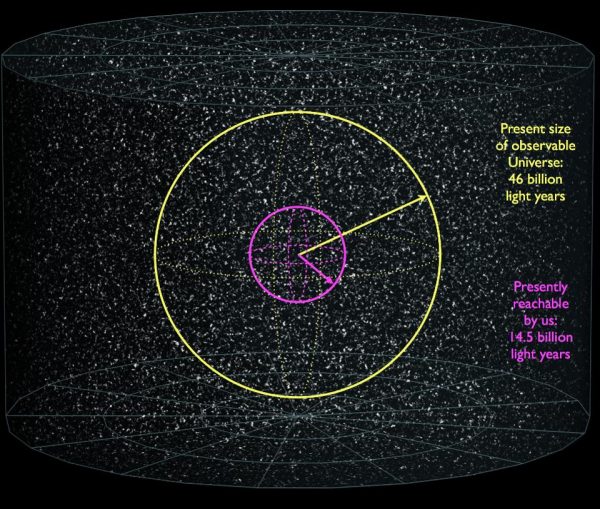 Within the observable Universe (yellow circle), there are approximately 2 trillion galaxies. Galaxies more than about a third of the way to the boundary of what we can observe can never be reached due to the Universe's expansion, leaving only 3% of the Universe's volume open to human exploration. Image credit: Wikimedia Commons users Azcolvin 429 and Frédéric MICHEL / E. Siegel.
Tags
Astronomy
Big Bang
dark energy
Galaxies
gravity
Physics
Relativity
Categories
Physical Sciences

Just another test. My replies are not posting... for several days now. Just in case:
"The Universe is not expanding ‘into’ anything, despite what your intuition might tell you."
Really?! Intuition gets a lot of abuse here, but this is more than just "counter-intuitive." What does "expanding" mean, according to Ethan?

At least you are realistic enough to admit that everything you say is best guess material, at best, with our present understanding and tools. We, humans, tend to look for logic and even order in the universe. Just think what madness and chaos are out there. If you can think if, it exists.

Am I the only one who can comment on these articles? Are other people being kicked around?

Message me at startswithabang at gmail dot com if so... I want to find out!

I can post. I do NOT have an RSS subscription so I can't tell you if your stuff is being pushed out. Has your traffic dropped?

Regarding this article, I haven't read it yet.

To my mind, space itself requires, and is defined by, matter. No matter, no space.

“The law that nothing can travel faster than the speed of light only applies to an object's motion through space, not to the expansion of space itself.”

But the expansion of space can be measured only by the movement of the matter that defines the space.

Unfortunately, while I am aware of that the universe is not expending into anything, I always hate having to bring it up when people ask because I don't think there is a good way to visualize it. It seems like one of those "you have to understand the math" situations that are not satisfactory when I'm trying to help out people who know even less than I do because it feels like handwaving.

I don't have anything to complain about. ?

I wanted to post something on the Big Bang but my simulator is still far from ready so I haven't got the right material (proof) yet. But here's something I'm considering, where the BB is a solid medium that starts to cool down and becomes like a dried out soil full of cracks, this Voronoi-like 'ribbed' medium also looks like foam with canals (aether) wherein knots can form …

Here's a rough design, where the 'bang' start with a first crack and so forth: https://goo.gl/ttXhGK

I had issue posting on Star Trek post, same as the issue couple of weeks ago. Gave up after 3-4 attempts

I had been unable to post for several days this week.

@ski #6 (now that Ethan has pushed everything out manually ;-( ): You wrote, "To my mind, space itself requires, and is defined by, matter. No matter, no space." That's not correct, as far as our best (to about one part in 10^12) understanding goes. If you don't have any matter, then the stress-energy tensor for space is essentially null.

The result of that, solving Einstein's field equations, is that you have a perfectly flat Minkowski spacetime, with zero curvature everywhere. That's exactly the spacetime we use when we teach simple special relativity.

As soon as you add matter (i.e., non-zero stress-energy), then you get some sort of curved spacetime, and solving the field equations analytically becomes much more difficult. Particular distributions of matter (for example, a uniform sphere, uniform density dust, a point concentration) can be solved analytically, or perturbatively.

If space itself is expanding.....why is light being red-shifted at all? Why isn't it simply expanding with the media through which it's traveling -space-time- resulting in no observable change? Wouldn't a red-shift only occur if the light's wavelength was changing -expanding- differently than the space through which it's traveling? Or is light still being red-shifted by movement within space-time, just not as much as we thought?