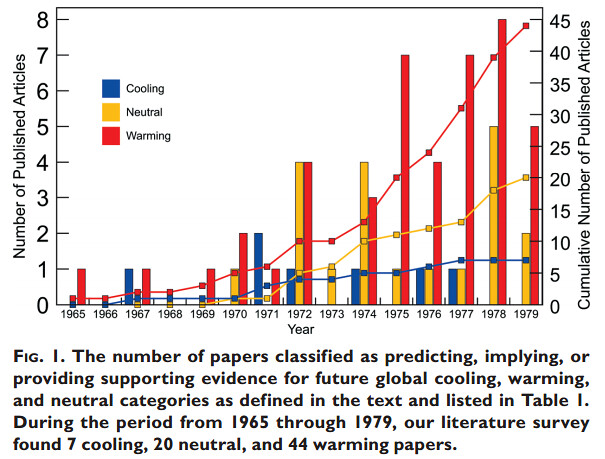 It's the folks over at No Truth Zone again. Thanks (do I mean that? No, I don't) ATTP for drawing it to my attention (via the swamp that is Breitbart). The wiki part is tediously wrong; see A child’s garden of wikipedia, part I in the unlikely event of your not being able to work out why yourself. It is though important to realise that Breitbart and NTZ are lying about everything; not just the important bits. Notice also the way that Peterson is Rasooled.

NTZ achieves it's trick by the not-very-subtle method of redefining the meaning of "global cooling scare". Instead of being a worry about the future, it comes to include papers from the 1960s and 1970s that indicated the globe had cooled (by -0.3° C between the 1940s and ’70s). And some other things. Naturally, if you do that you'll get a very different answer (note also that estimate is no longer valid, but it looked like that then; the temperature records have got better).

I didn't bother look through their full list of papers (did you? Did you find any new and interesting ones in the list? Do tell). They will, inevitably, be wrong. One obvious wrong one is them citing the 1975 NAS report in their favour, which it isn't.

Wiki note: the wiki article [[Global Cooling]] has been stable for ages. Oddly, just after the NTZ post, "User:Urbansiberia" tried its hand; for example correcting erroneous claims (referencing, ho ho ho, Breitbart; as though anyone could use that as a reference) or the what-might-appear-to-be-more-subtle-if-you're-clueless-about-wikipedia summary-free edit.

Thanks (do I mean that? No, I don’t) ATTP for drawing it to my attention (via the swamp that is Breitbart).

That is a sad article. Old men fighting wars of the past.

Why is it that the people who seem to have less understanding of science than the average 10 year old are in charge of this zoo? Hello fellow science nerds. Why aren't we doing a better job of taking the reins of power out of the hands of the business whiz class and their sycophants? If we don't rise to the occasion soon, maybe hire some superior PR help and prevail over the idiots, then future generations are going to be reduced to mining landfills for vitals, and snorkeling off of the coast of Pennsylvania for the sunken treasures of New Jersey. And that is one of the better case scenarios.
Yay.
Can't wait.

The apotheosis of the Razool came in 1984, when Carl Sagan , the S in the Turco, Toon Ackerman Pollack & Sagan 'nuclear winter ' paper hired a PR firm while it was still in peer review and put out a pre-publication version in America's largest circulation tabloid, Parade, whose science editor he happened to be.

So great was the ballyhoo that researchers in the field started referring to TTAPS as " Et al. and Sagan"

SteveP - The guys running the zoo answer to the big fossil fuel interests. They have trillions at risk. Pretty good reason to hide the truth.

See-also comments 8 and 9 over here.

Isn't there a more beautiful example of the power of science than that most scientists were predicting future warming in a period where they thought it had been cooling for decades.

"What follows is a list of over 285 papers published during the 1960s, 70s and 80s showing there was a near consensus of an imminent global cooling"

I opened up a selection of the papers put forward and found the following:

"By the late 1970s that prevailing view had seemingly shifted 180 degrees to the belief that the earth’s atmosphere was being warmed as a result of an increasing CO2 loading of the atmosphere."

- A scan of a typescript thesis submitted by one Bonnie MacGill for her Masters. The title is 'Temperature Variations in Southern Saskatchewan 1921-1970 Regional Identification of Trends' though you'd never guess that from quote, and Ms MacGill is clear that there is no way of determining if the current conditions (at the time) were no more than a pause in the warming trend. (Page 2)

- A paper, admittedly on the cooling trend, that contained this sentence:

At which point I stopped reading.

Right.. how many papers can be dredged up from the 1960s to support the Expanding Earth hypothesis..? (or at least not explicitly refute it)

NTZ, doesn't that include the people who did a supposed audit of the references in the IPCC reports and declared any and all non-journal articles as "non-peer reviewed"? Which included the prior IPCC reports, so one wonders why so many people call themselves "expert reviewers" of IPCC reports...

Just for some background on Ken Richards, his real name is Rick Cina and he's a children's entertainer who lives in Illinois. His youtube channel is here.

I rather liked this one. I suspect it was included because it contained the words decreasing trend. But is it not that the nights were getting warmer?

“An appreciable number of nonurban stations in the United States and Canada have been identified with statistically significant (at the 90% level) decreasing trends in the monthly mean diurnal temperature range between 1941–80.”
Newell, 1974

[Well, NTZ obviously didn't *read* that many papers, not even their abstracts, so yes it must have been done by word search -W]

In the preface to the 1984 edition of his book "Climatic History and the Future", Lamb wrote the following:
"It is to be noted here that there is no necessary contradiction between forecast expectations of (a) some renewed (or continuation of) slight cooling of world climate for some years to come, e.g. from volcanic or solar activity variations; (b) an abrupt warming due to the effect of increasing carbon dioxide, lasting some centuries until fossil fuels are exhausted and a while thereafter; and this followed in turn by (c) a glaciation lasting (like the previous ones) for many thousands of years.”

And there was this:
Arctic Sea Ice Trend May Have Turned The Corner As Ice Volume ... notrickszone.com
Feb 12, 2016 - The chart above actually shows a slightly upwards trend over the past 5 years, which is also confirmed by the following Arctic sea ice volume ...

That damned five year trend. It's always the fifth year.

You might find this interesting: Ideological Segregation Among Online Collaborators: Evidence from Wikipedians, October 11, 2016

ABSTRACT
Do online communities segregate into separate conversations when contributing to contestable knowledge involving controversial, subjective, and unverifiable topics? We analyze the contributors of biased and slanted content in Wikipedia articles about U.S. politics, and focus on two research questions: (1) Do contributors display tendencies to contribute to sites with similar or opposing biases and slants? (2) Do contributors learn from experience with extreme or neutral content, and does that experience change the slant and bias of their contributions over time? The findings show enormous heterogeneity in contributors and their contributions, and, importantly, an overall trend towards less segregated conversations. A higher percentage of contributors have a tendency to edit articles with the opposite slant than articles with similar slant. We also observe the slant of contributions becoming more neutral over time, not more extreme, and, remarkably, the largest such declines are found with contributors who interact with articles that have greater biases. We also find some significant differences between Republicans and Democrats.

[It is in general terribly difficult for outsiders to write sensibly about wiki. So, reading through:

* The findings are striking. In spite of considerable heterogeneity, contributors on Wikipedia
display an overall tendency that points towards less segregated conversation. That doesn't really make sense. Any given article only has one talk page. It isn't possible to have segregated conversations, they way e.g. Watties congregate in their own walled garden, or the way the Anti-Trump folk post to fb.
* Contributors with every possible bias and slant contribute to articles
containing every other possible bias and slant - again, this doesn't seem surprising. If you're a rabid Repub you're just as likely to want to edit the Hillary Clinton article as a rabid Dem.
* Slant of content indicates which way a particular piece of... We normalize a neutral point of view to 0. This makes the apparently insane assertion that they are capable of judging what is neutral. How they measure slant appears crude.
* We also show that contributors moderate their contribution over time - this is more interesting, but not desperately surprising: anyone who shows up with strong biases and doesn't moderate them won't be around long.

They notice that wiki change is editing: you modify, add or remove stuff. And they notice that this is different from e.g. fb or Twitter. And they suggest that this may be an important difference. It is; but that's hardly news. They also, disconnectedly, notice the need to talk with people you disagree with. What they don't point out is that you need to be polite in those conversations. The sort of people who let themselves go on fb or Twitter don't survive -W]

WC - "This makes the apparently insane assertion that they are capable of judging what is neutral."

Given that a NPOV is one of wiki's three core content policies, the ability to judge what is or isn't neutral would seem a necessary quality. If not, then the entire Wiki project is insane.

[Wiki has massive problems judging NPOV even with experienced good-faith actual human beings doing it. If some software could do it for us that would be great, but I don't think it is believable -W]

Kevin O'Neill. I would have thought the following was obvious but here goes anyway. Neutrality is an unattainable ideal, a fact that Wiki's guidance on NPOV makes clear. It is worth trying to attain it in the Wiki context because its articles are likely to be better as a result. The Wiki project is therefore entirely sane but inevitably imperfect. The result is a wonderful knowledge resource on historical and factual matters. I tend to avoid though on matters that are currently controversial.