gregladen | May 17, 2016
As Rachel points out, the first one is pretty conventional. The second one is a killer. Have a look:

laelaps | June 13, 2010
A McDonald's ad from the Netherlands envisions what might have happened if Pleistocene humans had the option of visiting the drive-thru instead of going after fresh mammoth steak. 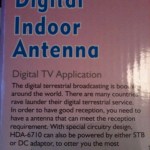 bioephemera | March 13, 2010
For the annals of humorous translation mistakes, this package from a digital antenna we bought last fall promises to . . . do something. I'm not sure what. For John O, who enjoys terrible advertising.

grrlscientist | February 1, 2009
tags: unusual pets, humor, Superbowl 2009 commercial, pedigree dog food, streaming video Ever think about getting an unusual pet like a bison, a boar, an ostrich or a rhino? See what happens to the pet owners in our Super Bowl ad, and then you'll know why you should get a dog. [0:30]

grrlscientist | November 30, 2008
I know that the holidays were originally celebrated by non-religious folk -- more commonly known as "godless heathens" by the religious wingnuts of all persuations in the crowd -- but our holidays were savagely stolen, repackaged and sold as religious consumer events devoted to orgiastic spending, so I'd like let you know that you are not stuck sending out schmaltzy religious holiday cards any longer. Now you can reclaim our holidays for what they were: time for celebrating the solstice and spending peaceful time with our loved ones, instead of spending money we don't have on trinkets that…

zooillogix | October 3, 2008
How we missed this the first time around I will never know, nor forgive our readers for. Enjoy! Thanks to Mike McElwain for sending along. yitb

zooillogix | May 28, 2008
The commercial that inspired Ben and me to be English majors. Thanks to Peter Angelastro for unearthing this gem.

sb admin | November 16, 2007
Anti-drug ad parody that's also an anti-drug ad itself. This is Your Brain on Heroin: Any Questions?.
Advertisment