awild | February 21, 2010
As winter doesn't have much insect activity, it's the season I use to work on my equipment.Â  Yesterday I tried out a new arrangement to diffuse the heads on my mt-24ex twin flash when the heads are mounted on long, moveable arms. Here's a time-lapse video showing the construction, plus a short clip of the gear in use: Note the effect of the diffusion: A bare, undiffused flash produces harsh shadows and glare A diffused flash provides softer, more even lighting

awild | December 28, 2009
Earlier I listed my pick of the best insect photos of the year taken by other photographers. Now it's my turn. In 2009, I snapped 8000 exposures to produce 805 processed, saleable images of live insects. Below are my favorites. A parasitic Pseudacteon fly targets a fire ant in Argentina Male size variation in Onthophagus dung beetles Aphaenogaster ants are tempted by the elaiosome of a bloodroot seed, Illinois Eastern treehole mosquito larvae, Illinois Trophallaxis in wood ants, Wisconsin Face to face with a giant water bug, Illinois male and female northern walking sticks,…

The best insect photos of 2009

awild | December 23, 2009
In 2009 the world's macrophotographers- both amateur and professional- continued to capture breathtaking images of the arthropod microscape.Â  I've been bookmarking insect photos from around the web that catch my eye, and after spending some time this week reviewing the candidates I've selected nine favorites. Wow. These are the images from fellow photographers that most captured my imagination over the past year. Together, by Jan Zajc untitled, by Bonali Giuseppe Frog beetle ready for take-off, by Alfred Preuss Ants climbing tree, by Uros Kotnik Water striders, by Clay Bolt Eyes…

awild | September 8, 2009
Crematogaster lineolata queen with a retinue of workers. (Vermillion River Observatory, Illinois) This weekend we took a trip with some entomology students to the Vermillion River Observatory.Â  The astronomical function of the observatory has long been abandoned, but the site remains as a lovely nature reserve and one of the closest patches of decent forest habitat to where we live in Champaign-Urbana. The acrobat ant Crematogaster lineolata was one of many ants we encountered, and in this nest the queen was right up near the surface.Â  She lingered long enough for me to get a few shots… 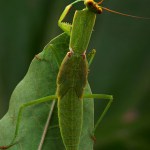 awild | February 22, 2009
I've created a set of desktop wallpapers to fit the newer 1680 x 1050 widescreen monitors. To put any of the following on your desktop, click on the image. Once the large version loads to your browser, right-click and select "Set as desktop background."

awild | February 12, 2009
Here's a sharper version: Parasitic Cotesia wasp attacks a Manduca larva The story itself is amazing.Â  It's been known for some time that Ichneumonid and Braconid wasps inject circular strands of DNA- called polydnaviruses- into their host insects along with their eggs.Â  This DNA is encoded by the wasp genome but acts like a virus in their hosts, dismantling the immune system to protect the developing wasp larvae.Â  In a study out this week in Science, a team headed by Jean-Michel Drezen pinpointed the origin of the polydnavirus as being a type of nudivirus.Â  It seems that some ancient…

awild | January 22, 2009
Dalantech over at the No Cropping Zone writes: From time to time I see people argue about the backgrounds in macro images, and about how dark backgrounds donât look natural âwhatever the heck that means. Seriously whatâs natural about macro photography? Do you see all the detail in a beeâs compound eye or the tiny âhairsâ that cover most leaves without the aid of some sort of magnifier? I think Dalantech is entirely correct in that arguments about the naturalness of black backdrops are unconvincing.Â  There are many reasons to take photographs, and capturing an animal in a particular…

awild | January 18, 2009
Only one lens can take this shot If you've paid attention to insect photography over the past decade, you'll likely have noticed that a single lens, Canon's MP-E 1-5x macro, has come to dominate the market.Â  Every professional insect photographer I know owns one, and many of the dedicated amateurs do as well.Â  Indeed, some photographers have even switched from Nikon to Canon just to be able to use it. Yet the lens is also a throwback, possessing few of the electronic features of modern camera technology.Â  It is largely manual, with no auto-focus or image stabilization, and is…

awild | January 1, 2009
Formica incerta, Illinois Despite a widespread belief that ants produce formic acid, the habit is confined to only one of the 20-some ant subfamilies, the formicinae.Â  This is among the most abundant subfamilies, containing the familiar carpenter ants and field ants, and is recognizable by the single constricted waist segment and an acid-dispersing nozzle called the acidopore at the tip of the abdomen.Â  The most recent myrmecos.net upload covers a variety of formicine species from Arizona, Illinois, and South Africa. Click here to visit the gallery.

awild | December 26, 2008
Pasimachus sp. ground beetle, Arizona My apologies for the lack of blogging the past few days.Â  I've been taking some time away from posting for the holidays, but I'll be back next week.Â  In the meantime, here's a Pasimachus ground beetle... photo details: Canon 100mm f2.8 macro lens on a Canon EOS 20D ISO 100, f/18, 1/250 sec, indirect strobe in a white box

awild | December 10, 2008
Apterobittacus apterus, California I lived in California until a few years ago, and one thing I enjoyed about the Golden State was the unique insect fauna, full of bizarre and relictual creatures.Â  One of the oddities was the wingless hangingfly, a leggy mecopteran that lurks in the coastal grasslands. The insect above was photographed indoors.Â  I made a makeshift studio out of various bits of debris lying around the lab: a matte black notebook for a backdrop, a jar to hold the grass upright, and the white lid to a styrofoam cooler propped a few inches above the insect.Â  An off-camera…

awild | December 4, 2008
A deer flea hangs from a hair, California I don't ordinarily hang around animal carcasses.Â  But every now and again I'll brave a fresh roadkill to shoot the parasites as they jump ship from the cooling body.Â  Fleas and lice are fascinating creatures, and as they are hardly ever photographed alive I can capture some unique images just by staking out a common subject that most people would not think to shoot. photo details: Canon MP-E 65mm 1-5x macro lens on a Canon EOS D60 ISO 100, f/13, 1/200 sec, flash diffused through tracing paper

awild | December 1, 2008
...as judged by an utterly impartial panel of one here at Myrmecos Blog. These are photographs that caught my eye and my imagination over the past year.Â  I hope you enjoy them as much as I do. Globular Springtail, by Brian Valentine Horsefly, by Igor Siwanowicz Angry Queen, by Piotr Naskrecki Bee in Natural Light, by Dalantech Tenhave Woods, by Rick Lieder Painted Grasshopper, by Mundo Poco Dragonfly, by Necip Perver Untitled, by Martin Amm Gotcha!, by Marsel van Oosten

A Directory of Friday Beetles

awild | November 23, 2008
I've posted enough Friday Beetles that I can no longer remember which species I've already done. Some species were almost posted twice out of sheer forgetfulness.Â  Must be the academic scatter-brain. So to keep them all straight I've made a list.Â  This is mostly for my own good.Â  In any case, here is the Friday Beetle Directory: Adranes - Ant-Nest Beetle Onthophagus gazella - Gazelle Scarab Dineutes sublineatus - Whirligig Beetle Lutrochus - Travertine Beetle Scaphinotus petersi - Snail-eating Beetle Laccophilus pictus - Predaceous Diving Beetle Apteroloma caraboides - Snowfield Beetle…
Advertisment