I had my tonsils out in 1954. In those days a few bouts of tonsillitis, and out they came. I remember being plied with chloroform before the operation and with ice cream after. I also remember being given a special gum, “imported from America” to chew. It was probably some version of “Aspergum” which contained aspirin and was supposed to relieve the sore throat. The idea of using the gum after a tonsillectomy was introduced in the 1940s by Lawrence Craven, a California physician, who made an interesting observation. Patients who chewed the gum bled more, leading Craven to speculate that aspirin had an anti-clotting effect. At the time it was already known that heart attacks and strokes could be caused by blood clots and Craven began to treat his adult coronary disease patients with aspirin. He noted a reduced frequency of heart attacks! Craven published his result but because he had no controls they were mostly ignored until British biochemist John Vane clearly demonstrated aspirin’s effect on the blood in 1971. Today aspirin is standard therapy in people at risk for cardiovascular disease, tracing back to the serendipitous finding by Lawrence Craven.

The word “serendipity” was introduced into the English language in the eighteenth century by writer Horace Walpole who was taken by the ancient Persian tale of the “Three Princes of Serendip,” who during their travels made a number of discoveries “by accidents and sagacity of things they were not in quest of.” “Serendipity” came into common use as a description of a “lucky turn of events,” with Walpole’s original link to sagacity, defined as “penetrating intelligence, keen perception and sound judgement” being forgotten. Walpole’s intent was to convey the idea that an accidental discovery doesn’t amount to much if the discoverer is not astute enough to capitalize on the chance finding. 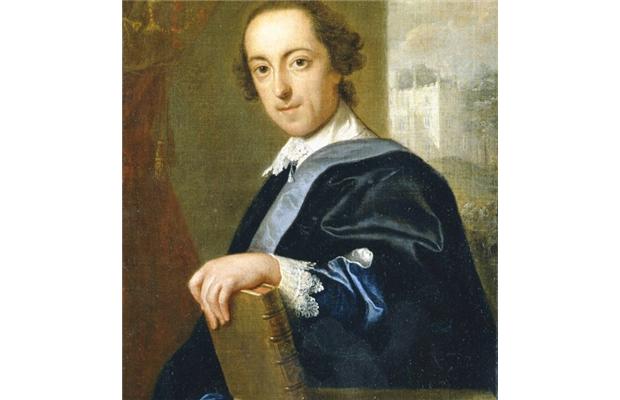 The word “serendipity” was introduced into the English language in the 18th century by writer Horace Walpole, who was taken by the ancient Persian tale of the Three Princes of Serendip. (National Portrait Gallery/Wikipedia)

The three princes of Serendip certainly exhibited sagacity after accidentally coming on some strange animal tracks on a road. When they later learned from a merchant that he had lost a camel, the princes give him a remarkable description of the animal. The camel is lame, blind in one eye, is missing a tooth, carried honey on one side and butter on the other and was ridden by a pregnant woman. When asked how they could possibly have come up with such an accurate description, the princes explained that grass had been eaten from the side of the road where it was less green, so the camel was blind on the other side. Because there were lumps of chewed grass on the road the size of a camel’s tooth, the princes inferred they had fallen through the gap left by a missing tooth. The tracks showed the prints of only three feet, the fourth being dragged, indicating that the animal was lame.

That butter was carried on one side of the camel and honey on the other was evident because ants had been attracted to melted butter on one side of the road and flies to spilled honey on the other. There was also an imprint in the dirt from which they deduced the camel had knelt to let down a rider. And why was the rider a pregnant woman? There was some urine nearby and some handprints that suggested a woman had needed to use her hands to get up after urinating, her extra weight requiring a push. Shades of Sherlock Holmes. Maybe Sir Arthur Conan Doyle had serendipitously read about the Princes of Serendip.

The Persian tale may be somewhat far-fetched, but the story does make a point. The three princes of Serendip were able to capitalize on their chance observation when they heard about the lost camel. As Louis Pasteur would famously say, “in the field of observation, chance favours only the prepared mind.”

Pasteur himself furnished a great example of a serendipitous discovery. By 1878 he had formulated his germ theory of disease and had turned his attention to chicken cholera, a problem that plagued the French poultry industry. He managed to isolate a microbe from sick chickens he believed caused the disease and showed that injecting it into healthy birds led to their demise within a day. Scientific evidence requires repetition of an experiment, but a summer vacation intervened. No problem, Pasteur thought, he would just store his bacterial culture. To his astonishment, injecting the culture that had been stored for three months had no effect on the chickens!

He tried again with a fresh culture, and the chickens remained disease free. While many would have concluded that in the original experiment the chickens must have been affected by something other than the suspect bacteria, Pasteur hypothesized that perhaps storage for three months had altered the microbes in a way that resulted in offering protection against infection by fresh bacteria. As it turned out, Pasteur had managed to immunize the chickens with an attenuated microbe! It didn’t take long to prove that a weakened form of an infectious organism could impart immunity against the disease normally caused by a more vibrant version. The French chemist then went on to produce vaccines against anthrax and rabies, laying the foundations to the science of immunology, all because his mind was prepared to exercise sagacity when his chickens serendipitously survived an injection of a supposedly deadly microbe.

One of the most famous drugs in the world is also the result of serendipity. Witty advertising and a clever name conjured up to suggest power (from “vitality” and “Niagara”) has helped make Viagra a best seller. Of course it helps that the drug actually works. But Viagra did not start out life as a treatment for erectile dysfunction. That was a serendipitous finding. The little blue pill was first developed by the Pfizer pharmaceutical company as a possible treatment for angina. In clinical trials the effects on the heart were less than heartening, but some male patients began to report a surprising uplifting effect. Pfizer researchers were perceptive enough to recognize that they had stumbled upon a potential gold mine, and within six years managed to introduce Viagra to the marketplace where it has enjoyed stirring serendipitous success in spite of stiff competition.

The first few talks this morning focused primarily on policy as illuminated by science; only the third talk was pure science. Chiechanover's talk was on both the history and future of drug research, which he characterized in terms of three major revolutions in the last century. The first revolution…

What made me sick?

How do microbiologists determine which microbe caused a disease? As Tara has eloquently described (I, II), we are covered with bacteria and other microbes. A reasonable question then, is when we get sick, how do we which little devil deserves the blame? In many cases, pathogens (disease-causing…

The Surprises of Cardiology

It was a day of unexpected findings for the field of cardiology. First, there was the news that patients with stents did not have a longer life span or a reduced number of heart attacks compared to patients treated with statins and other heart drugs. (Only a few years ago, drug-coated stents were…

From the Manchineel to the Yew, Trees are a Source for Good or Evil

Guest Blog by Festival Nifty Fifty Speaker Joe Schwarcz PhD According to Talmudic tradition, a wise rabbi once proclaimed that if a person planting a tree were told that the Messiah had arrived, he should finish planting before going to greet him. That of course was long before there was any…

Others have made the same observation that Pasteur gets credit for, so the first such is probably buried in the sands of time:

Luck is what happens when preparation meets opportunity.
-- Seneca

The more I practice, the luckier I get.
-- multiple attributions of variants, including Arnold Palmer, Gary Player,...